This photo provided by the Multnomah County Sheriff's Office on Wednesday, Jan. 27, 2016, shows Ryan Bundy, one of the members of an armed group occupying the Malheur National Wildlife Refuge as part of a dispute over public lands in the Western U.S. Bundy and several others were arrested on Tuesday, Jan. 26, prompting gunfire and leaving one man dead during a traffic stop along a highway in Oregon's frozen high country. (Multnomah County Sheriff via AP)

BURNS, Ore. (AP) — Federal and state law officers arrested the leaders of an armed group occupying a national wildlife refuge, during a traffic stop along a highway in Oregon’s frozen high country that prompted gunfire and left one man dead.

Militant leader Ammon Bundy and his followers were reportedly heading to a community meeting at the senior center late Tuesday afternoon in John Day, about 70 miles north of Burns, to address local residents to discuss their views on federal management of public lands.

In a statement, the FBI and Oregon State Police said agents had made a total of eight arrests — including Ammon Bundy.

Oregon State Police confirmed that its troopers were involved in the traffic-stop shooting. One of those arrested, described only as a man, suffered non-life-threatening wounds, the agencies said. Another man “who was a subject of a federal probable cause arrest” was killed, they said. The agencies said they would not release further information pending identification by the medical examiner.

The Oregonian reported (http://bit.ly/1nOammV) that Arizona rancher Robert “LaVoy” Finicum was the person killed, citing the man’s daughter. The 55-year-old was a frequent and public presence at the Malheur National Wildlife Refuge, often speaking for the group at news conferences.

Arianna Finicum Brown confirmed her father’s death to the paper, saying “he would never ever want to hurt somebody, but he does believe in defending freedom and he knew the risks involved.”

It was unclear how many people remained in the buildings at the refuge. Late Tuesday night there was no obvious police presence there and Oregon Gov. Kate Brown asked for “patience as officials continue pursuit of a swift and peaceful resolution.”

Early Wednesday, the FBI and Oregon State Police established a series of checkpoints along key routes into and out refuge. The agencies said in a statement that the containment was to ‘better ensure the safety of community members.” They said the decision was made out of an abundance of caution. According to the statement, only Harney County ranchers who own property in specific areas will be required to show identification and be allowed to pass.

Brand Thornton, one of Bundy’s supporters, said he left the refuge Monday and wasn’t sure what those remaining would do.

“The entire leadership is gone,” he told The Associated Press in a telephone interview. “I wouldn’t blame any of them for leaving.”

Thornton called the arrests “a dirty trick” by law enforcement.

Each will face a federal felony charge of conspiracy to impede officers of the United States from discharging their official duties through the use of force, intimidation or threats, authorities said. Authorities released few other details. A new conference with the FBI, local sheriff and other was scheduled for late Wednesday morning.

Ammon Bundy’s group, which has included people from as far away as Arizona and Michigan, seized the headquarters of the Malheur National Wildlife Refuge on Jan. 2 as part of a long-running dispute over public lands in the West.

The confrontation came amid increasing calls for law enforcement to take action against Bundy for the illegal occupation of the wildlife refuge. They previously had taken a hands-off approach, reflecting lessons learned during bloody standoffs at Waco, Texas, and Ruby Ridge, Idaho, during the 1990s.

Many residents of Harney County, where the refuge is located, have been among those demanding that Bundy leave. Many sympathize with his criticism of federal land management policies of public lands but opposed the refuge takeover. They feared violence could erupt.

“I am pleased that the FBI has listened to the concerns of the local community and responded to the illegal activity occurring in Harney County by outside extremists,” Oregon Sen. Jeff Merkley said in a statement. ” I hope that the remaining individuals occupying the Malheur National Wildlife Refuge will peacefully surrender.”

The Bundys are the sons of Nevada rancher Cliven Bundy, who was involved in a high-profile 2014 standoff with the government over grazing rights.

The state police said it would investigate the officer-involved shooting.

The militants, calling themselves Citizens for Constitutional Freedom, came to the frozen high desert of eastern Oregon to decry what it calls onerous federal land restrictions and to object to the prison sentences of two local ranchers convicted of setting fires.

Specifically, the group wanted federal lands turned over to local authorities. The U.S. government controls about half of all land in the West. Conflicts over Western land use stretch back decades.

In the 1970s, Nevada and other states pushed for local control in what was known as the Sagebrush Rebellion. Supporters wanted more land for cattle grazing, mining and timber harvesting. 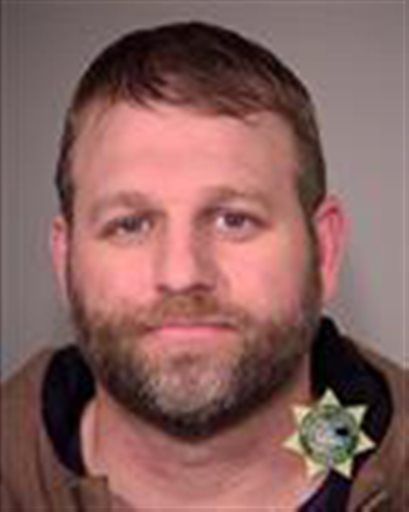 This photo provided by the Multnomah County Sheriff's Office on Wednesday, Jan. 27, 2016, shows Ammon Bundy, one of the members of an armed group occupying the Malheur National Wildlife Refuge as part of a dispute over public lands in the Western U.S. Bundy and several others were arrested on Tuesday, Jan. 26, prompting gunfire and leaving one man dead during a traffic stop along a highway in Oregon's frozen high country. (Multnomah County Sheriff via AP)