The Utah Jazz celebrate with Gordon Hayward (20) after Hayward sunk a basket at buzzer in overtime against the Dallas Mavericks in an NBA basketball game, Tuesday, Feb. 9, 2016, in Dallas. The Jazz won in 121-119. (AP Photo/Tony Gutierrez)

DALLAS — Gordon Hayward and the Utah Jazz now have a win that coach Quin Snyder views as validation for the hot streak his young team is enjoying.

Hayward hit the winning jumper at the buzzer in overtime after Rodney Hood’s tying 3-pointer in the final seconds of regulation, and the Jazz extended their season-best winning streak to seven games with a 121-119 victory over the Dallas Mavericks on Tuesday night.

Snyder didn’t want to discredit his team’s run before the game, but said it was mostly at home, not to mention almost all against losing teams.

But this one was in Dallas, where the Jazz had lost 10 straight going back to Jan. 9, 2010. And it was against a Western Conference playoff contender, albeit one that could be fighting for one of the final spots if the Mavericks’ up-and-down play continues.

“I think we are learning more and more how to make winning plays,” said Snyder, whose team finishes a back-to-back in New Orleans on Wednesday night before the All-Star break. “Gordon made the right play, and he made the shot.”

Hood finished with 29 points — three shy of his career high about a month earlier against Memphis — and Hayward had 20, including 13 in the second half and overtime.

Chandler Parsons led Dallas with 24 points but missed an open 3-pointer for the lead with 24 seconds left in the Mavericks’ second straight overtime game and NBA-high eighth of the season.

“We had a couple of opportunities to step in to really good shots and they just didn’t go down,” Dallas coach Rick Carlisle said. “It’s a make-or-miss league.”

With the Jazz down 110-107 in regulation, Hood took a handoff coming around a screen and hit a leaning shot from the left corner over Parsons, who scrambled over on a switch.

Hood’s tying shot was the only made 3-pointer of the second half for either team after Dallas took a 29-21 first-quarter lead without making a two-pointer. The Mavericks were 6 of 12 from long range and made all 11 of their free throws in the opening quarter.

Hayward’s winner from the left baseline over Dallas center Zaza Pachulia came off an inbounds pass with 4.2 seconds left. Hayward dribbled left around the key, with Pachulia taking him on a switch and giving him just enough room to get the shot off.

“It was great playing against a veteran team like that and being able to gut one out at their place,” Hood said.

The Mavericks couldn’t hold an early 15-point lead and lost a chance to take momentum into the break by following up on an overtime win at Memphis. Instead, Dallas took just its second overtime loss.

“We’ve got to let this one eat at us, got to let it haunt us a little bit,” said Wesley Matthews, who had 16 points. “And we’ve got to come back with the whole mind frame of winning and nothing but winning by any means.”

With the scored tied at 119-all, Hood was free for a layup after a miss by Parsons. But Parsons blocked it from behind on a play that was originally ruled goaltending and overturned on review.

The reversal led to a jump ball at midcourt with 39 seconds left. Rudy Gobert easily won the tip but Dirk Nowitzki, who had 17 points and nine rebounds, stepped between a pair of Jazz players to grab it.

Deron Williams, who had 23 points, put the Mavericks ahead 104-103 on a jumper with 1:06 remaining, and they stayed in front by hitting all six of their free throws in the final minute while twice answering layups from Hayward.

Raymond Felton, who had 17 points, seven rebounds and five assists, hit a pair of free throws for a 110-107 lead with 7 seconds left, setting up Hood’s tying shot. The Mavericks had season high on makes (36) and attempts (41) from the line.

Jazz: G Trey Burke missed his second game because of flu-like symptoms. He left the game against Milwaukee on Friday after playing 4 minutes and is missing the second road trip since then. … Derrick Favors had 16 points, eight rebounds and six assists. Gobert added 14 points and 10 rebounds.

Mavericks: Nowitzki passed Otis Thorpe for 34th on the NBA’s rebounding list. He has 10,376 rebounds. … Parsons has scored at least 20 points in six of the past 12 games, and led Dallas in scoring for the eighth time in that stretch.

Jazz: At New Orleans on Wednesday. 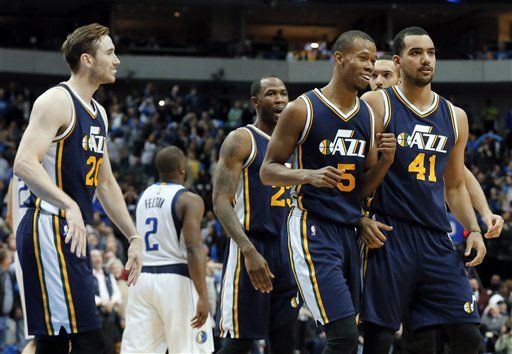 Utah Jazz's Gordon Hayward (20) , Rodney Hood (5), Trey Lyles (41) and Chris Johnson, rear, walk to the bench celebrating after Hood sank a 3-point basket late in the second half of an NBA basketball game against the Dallas Mavericks on Tuesday, Feb. 9, 2016, in Dallas. The shot tied up the game sending it into overtime where the Jazz won 121-119. (AP Photo/Tony Gutierrez) 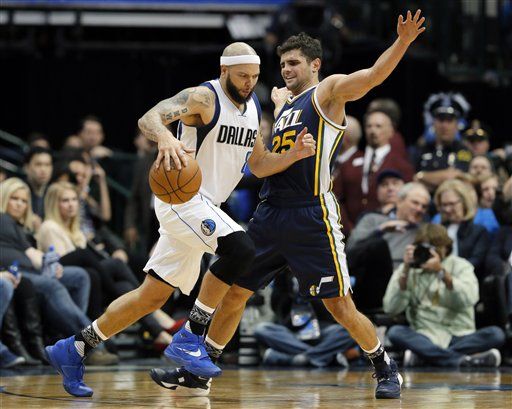 Dallas Mavericks' Deron Williams, drives past Utah Jazz's Raul Neto (25) of Brazil for a shot opportunity in the second half of an NBA basketball game, Tuesday, Feb. 9, 2016, in Dallas. The Jazz won in overtime 121-119. (AP Photo/Tony Gutierrez) 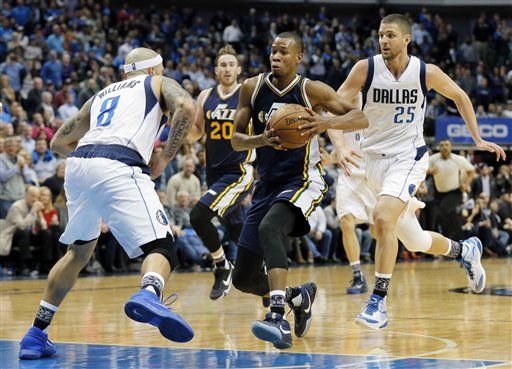 Utah Jazz's Rodney Hood (5) drives to the basket against Dallas Mavericks' Deron Williams (8) for a shot opportunity as Chandler Parsons (25) sprints to help against the play in the second half of an NBA basketball game, Tuesday, Feb. 9, 2016, in Dallas. The Jazz won in overtime 121-119. (AP Photo/Tony Gutierrez) 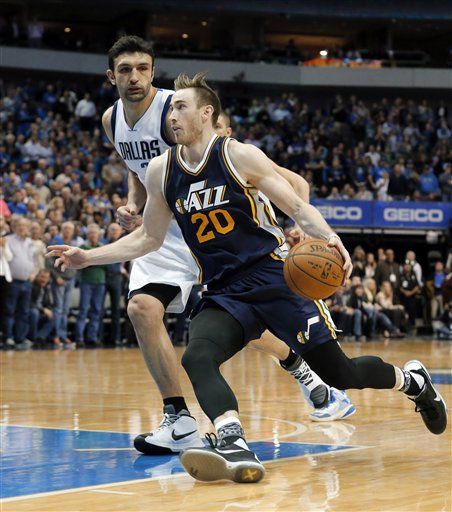 Utah Jazz's Gordon Hayward (20) drives to the basket after getting past Dallas Mavericks' Zaza Pachulia of Georgia of a shot opportunity in the second half of an NBA basketball game, Tuesday, Feb. 9, 2016, in Dallas. The Jazz won in overtime 121-119. (AP Photo/Tony Gutierrez)