LOGAN, Utah – Utah State is sending three former football players to the 2016 NFL Combine, which will begin on Wednesday, Feb. 24 in Indianapolis, Ind. The combine will run through Monday, Feb. 29. The Aggies scheduled to attend this year’s NFL Combine include Kyler Fackrell, Hunter Sharp and Nick Vigil.

In all 332 players were invited to this year’s NFL Combine, including 39 linebackers and 43 wide receivers.

Utah State’s three invites to the NFL Combine are tied for the most by any school in the Mountain West as San José State also had three invites, while Boise State, Colorado State and San Diego State each had two. As for the state of Utah, Utah had the most invites with six, while USU and Southern Utah had three each, and BYU had one.

The 2016 Scouting Combine is the annual job fair for prospective new NFL players. For six days at Lucas Oil Stadium in Indianapolis, players are put through a series of drills, tests and interviews with more than 600 NFL personnel including head coaches, general managers and scouts. The 2016 NFL Draft is slated for April 28-30.

Beginning Wednesday, Feb. 24, the NFL Network (Comcast Ch. 270, Dish Network Ch. 154, DirecTV Ch. 212) and NFL.com will broadcast live from Lucas Oil Stadium in Indianapolis, providing an up-close look at the more than 330 NFL prospects looking to take the next step in their careers. Live coverage of on-field workouts begins Friday, Feb. 26 at 7 a.m. (MT) with the offensive linemen, running backs and special teams, and continues with the quarterbacks, wide receivers and tight ends on Saturday, Feb. 27, linebackers and defensive linemen on Sunday, Feb. 28, and defensive backs on Monday, Feb. 29. Coverage of workouts begins each day at 7 a.m. (MT).

Fackrell, a 6-foot-5, 250-pound linebacker from Mesa, Ariz. (Mesa HS), earned fourth-team All-American honors from Phil Steele’s Magazine and was named a first-team all-Mountain West selection as a senior as he finished the season ranking first in the nation with five fumble recoveries, while also ranking first on the team with his 15.0 tackles for loss, first on the team with his school-record 12 quarterback hurries and second with his 4.0 sacks.

Facrkrell was also a semifinalist for the Butkus Award in 2015, honoring the nation’s best linebacker, and earned College Football News Sophomore Honorable Mention All-America honors in 2013, along with being the first player in school history to be named a Football Writers Association of America Freshman All-American in 2012.

Overall, Fackrell ranked sixth in the Mountain West in tackles for loss (1.15 pg) and 27th in the MW in tackles with 82 (6.3 pg) as a senior, which were the second-most on the team, as were his three games with double-digit tackles, all of which came against conference opponents. He also tied for first on the team with his two forced fumbles, to go along with a defensive touchdown on a fumble recovery in the end zone against Nevada (11/21).

Along with earning All-America and first-team all-conference honors as a senior, Fackrell was also named the Mountain West Defensive Player of the Week twice after performances against then-No. 21 Boise State (10/16) and Nevada (11/21). Against the Broncos, he had 11 tackles, including 2.5 tackles for loss, two fumble recoveries, two quarterback hurries and a forced fumble. Against the Wolf Pack, he recorded 10 tackles, including 0.5 tackles for loss, two quarterback hurries and a fumble recovery in the end zone for a touchdown.

In all, Fackrell earned conference player of the week honors five times during his career.

In 2015, Fackrell recorded double-digit tackles in three games, including a season high 11 stops against Boise State. He also had 10 tackles against both San Diego State (10/23) and Nevada, and recorded at least five tackles in 11 of the 13 games he played in. He also posted a career-high 3.0 tackles for loss against Colorado State (10/3), to go along with a career-high six quarterback hurries, and had tackles for loss in nine games.

Fackrell concluded his career with nine double-digit tackle games and is one of just 15 players in school history to earn first- or second-team all-conference honors three times. Overall, he had 253 tackles, which included 12.0 sacks and 36.0 tackles for loss, while adding seven fumble recoveries, five forced fumbles, four interceptions and three total touchdowns, with an interception return and fumble recovery on defense, to go along with a reception on offense.

Sharp, who concluded his senior season by setting a Utah State bowl record with his 11 receptions against Akron in the 2015 Famous Idaho Potato Bowl for 89 yards, had six career 100-yard receiving games and four career double-digit reception games, which included a career-high 13 catches against Air Force this past season.

Vigil, a 6-foot-2, 235-pound linebacker from Plain City, Utah (Fremont HS) earned first-team all-Mountain West honors for the second-straight season as a junior as he ranked first in the conference and sixth in the nation in tackles with 144 (11.1 pg), tied for fourth in the MW and tied for 26th in the nation in fumbles recovered with two (0.15 pg), and eighth in the MW in tackles for loss with 13.5 (1.04 pg).

As a junior, Vigil recorded a career-high 20 tackles against Air Force (11/14), which ranked tied for the fourth-most at the Football Bowl Subdivision (FBS) level during the year, and had seven double-digit tackle outings on the season, including five during Mountain West play, as his 144 tackles rank eighth all-time in school history. He led USU in tackles in 10 of its 13 games and was the only player in the nation to record at least nine tackles in every game during the regular season.

For his career, Vigil ranks third all-time in school history with 38.5 tackles for loss and 13th all-time with his 324 career tackles, to go along with 15.5 sacks, seven forced fumbles, two fumble recoveries, two interceptions and five pass breakups. During his three-year career, he had 13 double-digit tackle games. Vigil also played running back on offense as both a sophomore and junior, and finished his career with 169 rushing yards on 47 carries (3.6 ypc) with four touchdowns.

Washington quarterback Jeff Lindquist fumbles the ball as he is tackled by Utah State's Ricky Ali'ifua, left, and Kyler Fackrell, right, in the second half of an NCAA college football game, Saturday, Sept. 19, 2015, in Seattle. Washington won 31-17. Utah State's Jontrell Rocquemore recovered the fumble and ran it for a touchdown. (AP Photo/Ted S. Warren) 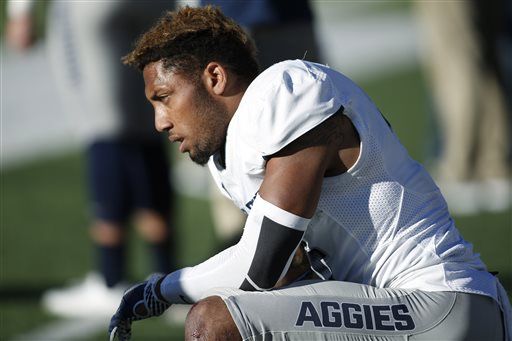