SACRAMENTO, Calif. — After the losses began to pile up after the All-Star break, the Utah Jazz got together and talked about changing the culture and having a good time on the court again.

Well, they’ve had a blast the last two games.

Derrick Favors had 28 points and 14 rebounds and Gordon Hayward scored 27 points for the Jazz, who never trailed Sunday in defeating the Kings 108-99. The win followed a convincing 114-93 victory over Washington on Friday.

“I think we’re just going out and having fun right now,” said Favors, who had eight points in the fourth quarter. “I think in the past, losing seven (of eight) we were kind of stressing, kind of panicking. But now we’re going out there and having fun, just playing as a team.”

The Jazz (31-35) won their second straight game by setting the tone early, coming out with energy against the lethargic Kings and leading by 18 points after one quarter. The lead remained in double figures for much of the game before the Kings made it somewhat close in the fourth.

Utah is hoping to return to the strong play they demonstrated before the All-Star break when they were 26-26. But they lost nine of 12 after the break in dropping to ninth in the Western Conference.

The victory pulled the Jazz within two games of idle Dallas and Houston, who are tied for eighth place and the final playoff berth in Western Conference. Utah hasn’t made the playoffs since 2012.

“This was a very important, a big-time win for us,” Utah center Rudy Gobert said. “We have 16 games left and we’re going to try to win all 16. It was nice to get a road win and good to beat a team that had defeated us twice earlier this season.”

Shelvin Mack had 14 points and eight assists and for Utah. Rodney Hood scored 14 points and Trevor Booker added 12 for the Jazz, who made 12 3-pointers and outhustled the Kings for three quarters and it showed in the Jazz’s 47-36 overall rebounding edge.

DeMarcus Cousins had 31 points 10 rebounds in his return from being suspended for one game by the Kings, who have lost five straight. Omri Casspi scored 20 points, Darren Collison had 14 and Willie McCauley-Stein had 10 points and seven rebounds.

Cousins was disciplined following a tirade directed at head coach George Karl in the fourth quarter of Thursday’s loss to Cleveland that continued after the game. General manager Vlade Divac suspended the volatile Cousins, calling it “conduct detrimental to the team.” Cousins has been suspended by the Kings and the NBA a combined eight times in six seasons.

Despite Cousins’ return, the slide continued for the Kings, who have dropped nine of 10, and 17 of their last 22 in falling out of the chase for a playoff spot. It was the first time all season that the Kings never held a lead in a home game.

Favors made four free throws in the final 37 seconds for Utah. The Jazz didn’t have a field goal in the final two minute before Hayward stole a pass and dunked in the closing seconds.

Trailing 94-76 with just under eight minutes remaining, the Kings scored nine unanswered points, cutting Utah’s lead to nine points. Sacramento trimmed the lead to 104-99 on a 3-pointer by Casspi with 23 seconds left.

“We would have liked to finish better, but I’m not disappointed in the least,” Utah coach Quin Snyder said. “The pressure is off (for trailing teams). They are attacking and the basket gets very big. We were strong in the fourth quarter when we needed to be.”

After the game, Cousins said that Karl had not said a word do him after the suspension and suggested that it was the veteran coach who got him suspended, not Divac.

“That was no suspension from the organization. That was one from the head coach. There’s a difference,” Cousins said. “There’s been so much extra stuff this season. Extra, unnecessary stuff. There are a lot of battles between guys that should be on your side. I would say that this (loss) is one of the most frustrating ones.”

Karl patted Cousins on the back when he returned to the bench before introductions.

“In general I think, professionally, I’ve done my job,” Karl said before the game. “There will be an opportunity to talk with Cousins. We’ve exchanged pleasantries, but nothing in depth. I am not going to communicate how we evolve in this. The best thing for everybody, for Cousins, for me, the team, is to get a win.”

Jazz: Utah made six 3-pointers in the opening quarter and led 36-18. … Gobert picked up his fourth foul in the first 14 seconds of the third quarter and fouled out in the fourth. … The Jazz have an 11-22 road record. … Hayward had 18 points and Favors 16 when Utah shot 59 percent and had a first-half season-high point total in leading 61-45.

Kings: Sacramento got off to its customary slow start, trailing 21-7. … Acclaimed Air Force pilot Chuck Yeager attended the game. … Looking for a spark, reserves Seth Curry and McCauley-Stein started the second half. Utah scored the first six points in the third quarter, drawing a chorus of boos from disgruntled Kings fans. 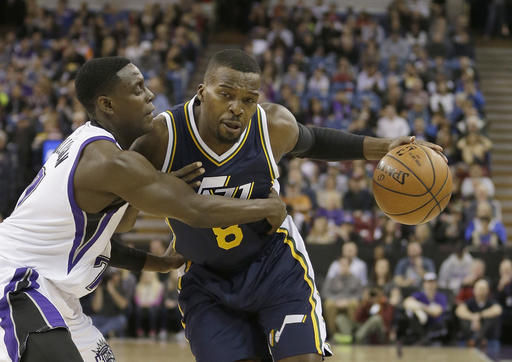 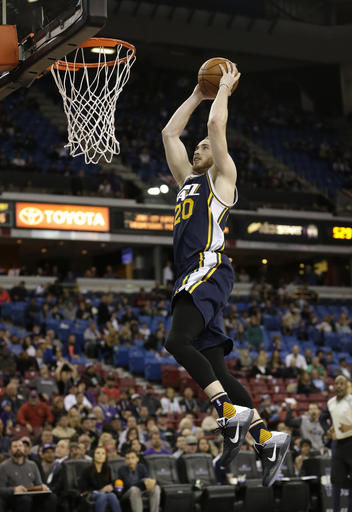 Utah Jazz forward Gordon Hayward goes up for the breakaway stuff in the final seconds of the the Jazz' 108-99 win over the Sacramento Kings in an NBA basketball game, Sunday, March 13, 2016, in Sacramento, Calif. (AP Photo/Rich Pedroncelli) 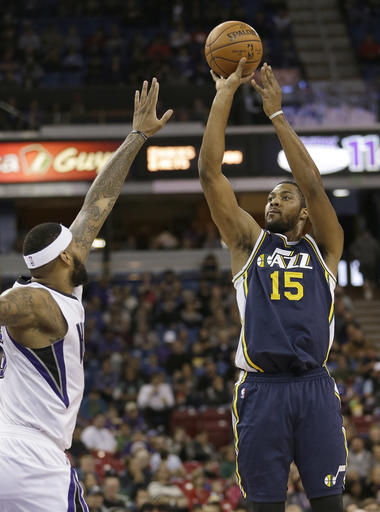 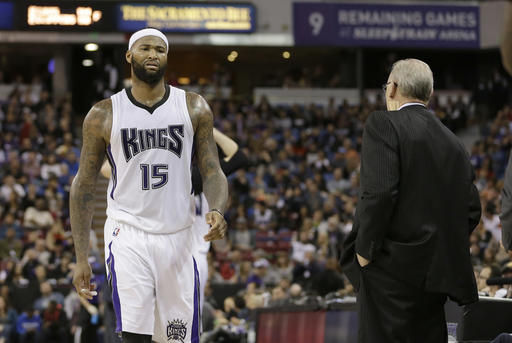 Sacramento Kings center DeMarcus Cousins passes Kings head coach George Karl, right, as he walks to the bench during the second half of an NBA basketball game against the Utah Jazz Sunday, March 13, 2016, in Sacramento, Calif. Cousins served a one game suspension, imposed by the Kings for "conduct detrimental to the team" after remarks he made to Karl during their game against the Cleveland Cavaliers. (AP Photo/Rich Pedroncelli)