Cade Austin, 30, arrested and charged with attempted murder and other charges.  Police claim Austin crashed his vehicle and then brandished a handgun and shot at paramedics before being shot himself.

LOGAN — Cade Austin has pleaded guilty to attempted murder and aggravated assault, for shooting at first responders during a traffic accident near Lewiston, last winter. The 31-year-old Preston, Idaho man appeared in 1st District Court Tuesday morning accepting a plea deal that will cancel a four-day trial that was scheduled for June.

Austin stood next to his public defender, Bryan Galloway, as he pleaded guilty to attempted murder and aggravated assault, both amended to second-degree felonies. As part of the deal, prosecutors dropped the remaining charges.

On December 15, Austin was driving a Pontiac Sunfire, northbound on US-91, when he ran off the road, striking a gas line and coming to a stop in a bar pit. He then brandished a handgun and exchanged gunfire with an EMT who arrived on the scene to treat him.

Austin continued to wave the gun around inside the vehicle while drinking alcohol from a bottle. He was later pulled from the car by SWAT team members after losing consciousness. He was transported to a hospital by ambulance and treated for gunshot wounds to the chest and right shoulder.

During Tuesday’s hearing, prosecutor Spencer Walsh told the court that toxicology results showed Austin had a blood alcohol level of .412 after the accident.

Outside the courtroom, Galloway said the level of alcohol in Austin’s system played a substantial part in working out the plea agreement with prosecutors.

“It would have been a question of whether he could even formulate the intent to kill somebody, given how much alcohol he had going through his system at that time,” said Galloway. “I’m no expert on that. We would have had to have experts come in and give their professional expert opinion as to how that would have affected his thought process and if he could have even formulate that intent.”

Austin spoke only briefly during Tuesday’s hearing, telling Judge Kevin Allen that he understood the ramifications of his guilty plea and that he was not being coerced.

Galloway said he is hopeful that the judge will show some leniency at the time of sentencing.

“Hopefully getting Cade back on his feet. His family looks forward to getting him back and going in the right direction. Hopefully it won’t be something that sets him back to far in life and I think he still could be a very productive member of society.”

Judge Allen scheduled sentencing for June 27. Austin is being held in the Cache County Jail without bail and could face up to 15-years in prison. 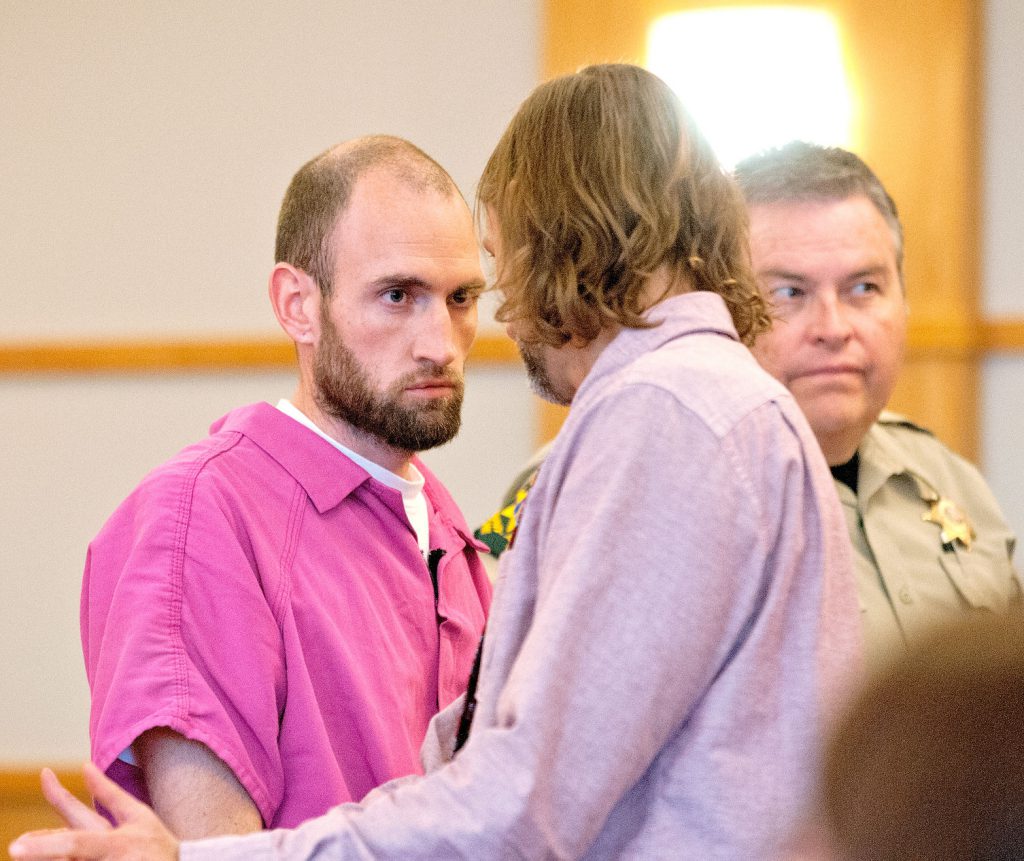 Cade Austin, left, listens to his attorney Brian Galloway before being escorted out of 1st District Court Judge Kevin Allen's courtroom on Monday afternoon in Logan during a pretrial hearing. The 30-year-old Preston, Idaho man allegedly fired upon EMS personnel in December after crashing his vehicle on U.S. Highway 91 near 13600 North outside of Lewiston.