At the Orbital ATK test facility, the booster for NASA’s Space Launch System rocket was fired for a two minute test on March 11. The test is one of two that will qualify the booster for flight before SLS begins carrying NASA’s Orion spacecraft and other potential payloads to deep space destinations.

The National Aeronautic Space Administration is conducting a full-scale test of the rocket booster for NASA’s newest rocket, the Space Launch System (SLS). The new rocket system is the agency’s largest yet and<span> will power the agency’s astronauts on their journey to Mars</span>.

The test will take place at 8:05 a.m. at Orbital ATK’s test facility in Promontory. The rocket test will last two minutes.

This is the second of two tests for the new rockets, known as Qualification Motor-2. The first test, back in March 2015, examined how the rocket would perform at high-temperature conditions. Last year they were able to heat the rocket propellant to 90 degrees Fahrenheit. Tuesday’s test will be on the opposite end of the heat spectrum, testing the rocket motor with a chilled propellant that has been cooled to 40 degrees Fahrenheit.

According to a NASA press release, testing at the thermal extremes experienced by the booster on the launch pad is important to understand the effect of the temperature range on the ballistic performance of the propellant.

When completed, two five-segment boosters and four main engines will power the world’s most powerful rocket, with the Orion spacecraft atop, to achieve human exploration to deep-space destinations, including a journey to Mars.

The first test flight of SLS with NASA’s Orion spacecraft, known as Exploration Mission-1, will take place in late 2018. 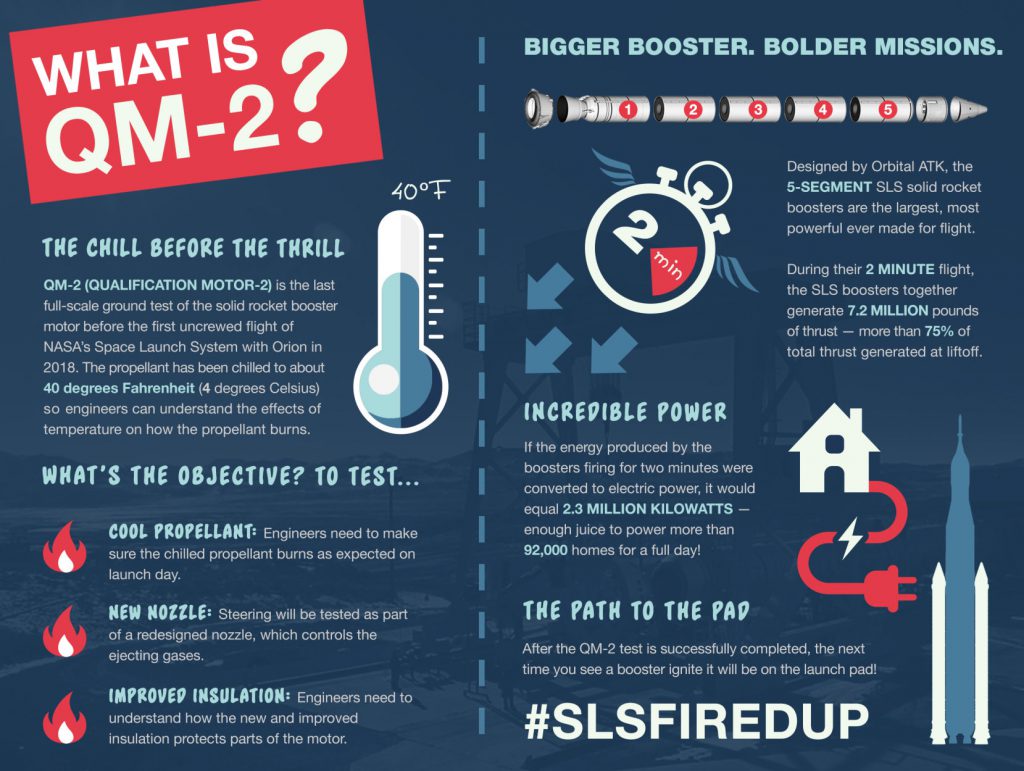