Rasmussen and Choate served as Co-Legislative Chairs of Districts 4 and 5, respectively, and in their letter they take issue that the local party has not distanced itself from presumptive Republican presidential nominee Donald Trump.

“The decision by the Executive Committee to take no public action disavowing our presidential nominee has left us in a difficult position,” the letter states.

Cache County Republican Party Chair Boyd Pugmire has been quoted recently stating that although he does not agree with Trump, he plans to still vote for him.

“It’s not a personal preference,” Pugmire said in a recent interview. “It’s what I feel needs to be done as far as keeping party unity. I think that I need to get past the personality issues and start looking at the consequences and how things are affected, and how the consequences will be affected by who is elected president.”

Choate and Rasmussen strongly disagree with Trump’s reported racism, xenophobia and misogyny. They want to see their local party leaders distance themselves from Trump and are disappointed their leaders have not “put some daylight between our efforts and those to elect him.”

“Put simply, Trump does not represent any of the ideals this party was formed to promote; in fact, his nomination makes a mockery of them. His candidacy threatens the ability of the GOP not only to win the White House, but to maintain majorities in Congress and state legislatures as well.”

Simply stating that the party must stay together only to defeat Hillary Clinton is not enough for Rasmussen and Choate. They believe America is threatened by either major party nominee.

Rasmussen removed his party affiliation and declared himself unaffiliated while Choate switched parties, declaring himself a member of the Libertarian party. Both Rasmussen and Choate were previous hosts of KVNU’s For the People radio program.

Their letter, in its entirety, appears below.

<em>This is a difficult letter to write, but it probably doesn’t surprise anyone. The decision by the Executive Committee to take no public action disavowing our presidential nominee has left us in a difficult position. We believe this to be a seminal moment for our nation and our Party.  While we respect everyone else’s opinions and reasons for concern, we simply cannot publicly support or work to build a Party that has nominated Donald Trump without some official statement to put some daylight between our efforts and those to elect him.</em>

<em>It’s true that political parties are organic, free associations of people with similar values and viewpoints.  They form to help individuals leverage the influence of these values in a pluralistic society.  Obviously, the bigger the group, the more influence.  Also, of course, the bigger the group the more diverse the opinions within that group.</em>

<em>When the “brand” of a party becomes so narrow it makes it difficult to win elections, the whole purpose of the party is void.  This has been the case with the national GOP for almost a decade now, and is a primary factor in the Republicans losing the popular vote in 5 of the last 6 presidential elections (our only national election). That already precarious situation has been pushed to the breaking point with Trump’s pending nomination. As the chief speechwriter for G.W. Bush recently said, “If (the GOP) ends up blessing the Trump nomination, it would turn the sins of Trump into the sins of the GOP. And (this GOP) would go down as the party who squandered the legacy of Lincoln and the legacy of Reagan, in a squalid and hopeless political effort.”</em>

<em>Donald Trump is directly antithetical to nearly every traditional Republican value (limited government, federalism, family values, advancement by merit, right-to-life, gun rights, and free trade to name a few). His unapologetic racism, xenophobia, and misogyny disqualify him from consideration as a precinct chair, let alone the presidency. In the words of one commentator, “Donald Trump is epically unprepared to be president. He has no policies, no advisors, and no capacity to learn. His vast narcissism makes him a closed fortress,…He is a childish man running for a job that requires maturity…Trump is an affront to basic standards of honesty, virtue, and citizenship. He pollutes the atmosphere in which our children are raised. As the founders would have understood, he is a threat to the long and glorious experiment of American self-government…There are certain standards more important than one year’s election. There are certain codes that if you betray them you suffer something worse than political defeat.”</em>

<em>Thankfully, all this makes Trump the most unpopular presidential candidate in history.  His unfavorables are near 70% right now, and that is already starting to affect down-ticket races. It will seriously jeopardize the GOP majority in the Senate.  If we claim to stand for traditional values, can we honestly maintain leadership roles in a Party that chooses such a man to be its standard-bearer?</em>

<em>Put simply, Trump does not represent any of the ideals this party was formed to promote; in fact, his nomination makes a mockery of them.  His candidacy threatens the ability of the GOP not only to win the White House, but to maintain majorities in Congress and state legislatures as well.  In short, his candidacy jeopardizes the purpose and very existence of the Republican Party.</em>

<em>That said, Trump is the candidate that won a plurality of support within the GOP. This Party has changed. He should have been a comical footnote on this race, instead he’s the presumptive nominee. The rank and file of the party have become so fed up that they are willing to blindly follow a charismatic charlatan. We have cut off our nose to spite our face.  </em>

<em>We oppose Trump for the same reasons some say they will support him: because this country needs a functioning party that promotes and defends conservative governing principles.  A GOP led by Donald Trump is not that party, and will provide no effective opposition to Hillary Clinton and the liberal Left.</em>

<em>Again, we respect everyone’s right to make up their own minds. In fact, we are sympathetic to the frustration of many voters in Cache Valley and beyond that the current dysfunction in Washington is unsustainable. Republican Nebraska Senator Ben Sasse summed it perfectly when he recently noted, “Washington is so broken and needs to be disrupted, and a lot of what could happen in this disruption would be good. Unfortunately, it has to be someone who takes seriously the stewarding of a whole nation. And who cares about facts. And who is trustworthy.” Donald Trump is not such a steward.</em>

<em>We also fully appreciate the awful specter of Hillary Clinton in the White House.  Yet this is not merely a binary choice between the two.  This Republic is threatened by either nominee winning the Presidency.  But if Trump becomes the face of the GOP, we are truly lost.  Where will the legitimate, principled, and conservative opposition come from then?</em>

<em>Therefore, for reasons both moral and political, we hereby give notice to Boyd Pugmire (Chair) Gina Worthen (Vice Chair) and the entire Cache County Republican Central Committee of our joint resignation from our positions within the Cache County Republican Executive Committee, as Co-Legislative Chairs of Districts 4 and 5, respectively. We will also ask the county clerk to remove our affiliation with the Republican Party removed from our respective voter registrations.</em>

<em>We take this action with somber minds, and look forward to a day when we may again be able to build and support the Grand Old Party of Lincoln with clear consciences.</em> 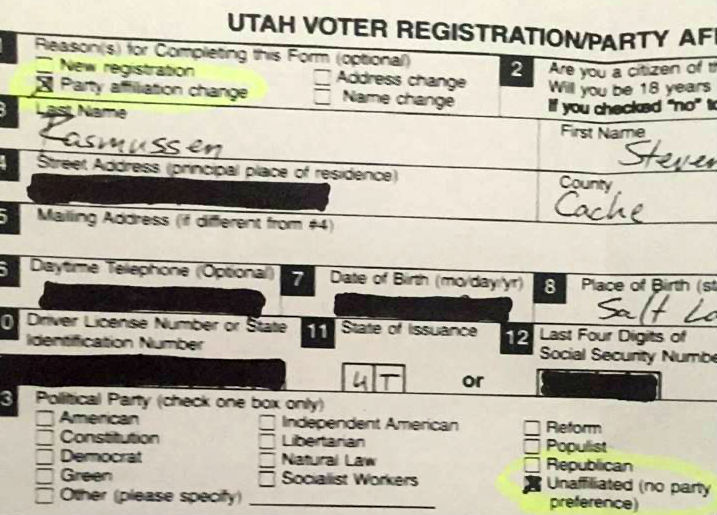