Residents of Providence listen to a panel of experts regarding the city manager ordinance during a recent meeting.

PROVIDENCE – After months of discussion and debate, the issue will finally be settled November 8. Voters will be able to make a decision whether or not the city will move administrative duties to a professional city manager.

It has been a divisive topic in Providence. Residents and members of the City Council on both sides of the issue have been outspoken about the possible change.

All administrative duties – along with the normal legislative duties – are with the mayor in the current form of government. That means the mayor hires, fires and supervises city employees. Those duties – if the proposal receives enough votes – will be relegated to the city manager, who would also have the ability to implement and recommend policies and programs, prepare and submit the annual budget, manage all expenditures and enforce city laws.

Rex Facer, an associate professor at Brigham Young University, joined three others on a recent panel put together to educate Providence residents on the issue. He said a city manager would bring a set of expertise in running a government organization, something an elected mayor might not have, but when cities are smaller, that expertise might not be necessary.

“In a lot of small communities, you just kind of get along,” he said. “Everybody just kind of goes, ‘Well, that’s just the way it is and we don’t want to pay for it because we’re afraid it will raise our taxes.’”

Once cities get bigger, more departments are formed, the work load gets heavier and the issues become more complex.

“You have lawsuits, you have all kinds of challenges,” Facer said. “They recognize that they just don’t have that capacity. Some of you may have noticed we don’t pay local officials, mayors and council members, very much. One of the major challenges is we’re asking a mayor to take care of and run the day-to-day decisions of the city for $6,000 a year. Occasionally you get somebody that is retired or is flexible enough they can devote the time, but the reality is, in many communities, you don’t have the luxury of somebody that can care for the day to day issues that may come up on a random schedule.”

But voters will have to decide if it is worth the cost. According to <a href=”http://www.utahsright.com/” target=”_blank”>Utah’s Right to Know</a>, other comparable cities in Cache Valley pay managers more than $100,000 annually. During the past several months of debate, many residents said they feel their tax dollars would be better spent on other things the city needs, such as repairing streets. Providence resident Ron Smith was one of the many residents who voiced an opinion in a May city meeting. He said he hasn’t heard a compelling case for hiring a city manager.

“I’ve heard about grievances,” he said. “But I’ve heard nothing that says we ought to really go back to this and make a big, and for a little town like Providence, a costly change.”

But for some, the cost is worth it.

“I’m there 40 hours a week, oftentimes more than 40 hours a week,” she said. “I think it increases that access. My management style has always been to try and give the resident the time and attention they deserve, because that is why we are there, is to serve our residents.”

Another panelist David Church, a Salt Lake City attorney for the Utah League of Cities and Towns, agreed.

“If in fact your mayor has had power and is in charge and can do it, you can accomplish the same thing without the city manager,” he said. “In most cities the mayor doesn’t have the ability to do that. It’s going to be the whole council or something like that.”

Some suggested that hiring a city manager would help prevent lawsuits against the city. Church said that could be true, but it isn’t certain.

“It is also possible that they could get you in a lawsuit,” he said. “Anybody with $360 and a nephew that went to law school can sue you. The key is are you going to lose lawsuits? Are you going to be worse off in the liability and the litigation side with a city manager than without one? As I say, I don’t have a dog in this fight but I can tell you, you will not be worse off from a liability side by having someone that is trained in school of government working on your office.” 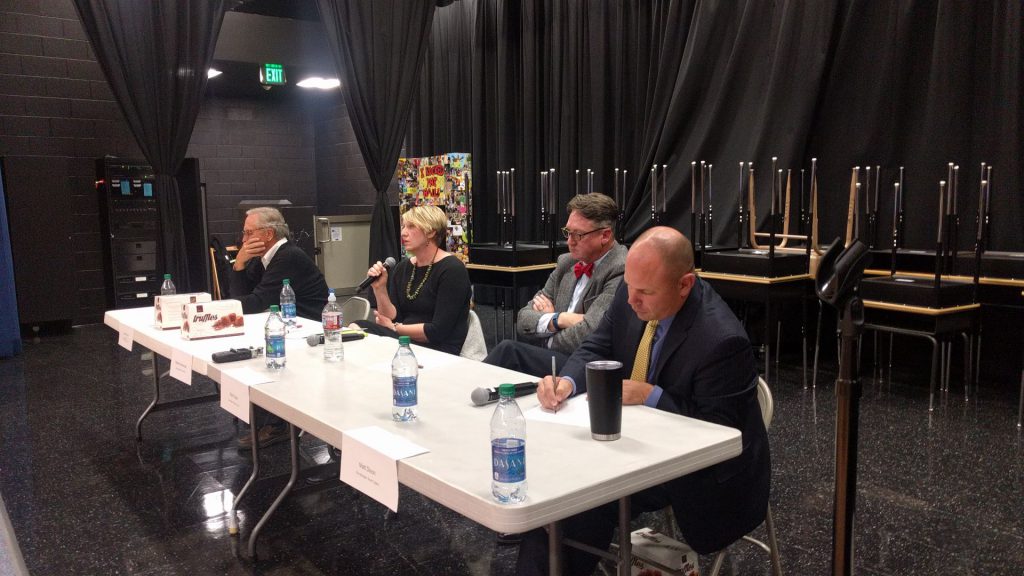 The panel of experts at the recent Providence City meeting.