LOGAN, Utah – Utah State women’s volleyball remained unbeaten in four-set matches with a 3-1 victory over Nevada on Saturday afternoon, running its record in four-set matches to 6-0 on the year. The win moved the Aggies to 10-11 overall and even in the Mountain West at 5-5, while the Wolf Pack dropped to 14-7 and 5-4 in league play with the defeat.

“It is nice to win and I thought we played well,” head coach Grayson DuBose said after the match. “We attacked for a nice high number, we dug a bunch of balls and our serving was strong in that first and fourth game. All of the digs really allowed us to turn those in transition and that is really a hallmark of our team.”

Junior outside Lauren Anderson led the Utah State attack with a career-high 23 kills, hitting a career-high .435 (23-3-46), and was one of three Aggies to record double-digit kills. She was followed by senior outside Kaylie Kamalu-Smith with 15 and junior right side Kayla DeCoursey with 11. Kamalu-Smith also added 12 digs for her team-best fifth double-double of the year. Overall, Utah State hit a season-high .312 (60-17-138) during the match, including a blistering .467 (17-3-30) during the opening set.

Nevada came back in the second set and senior outside Madison Morrell recorded 12 of the team’s 16 kills in the frame, leading to a 25-18 final. Morrell was the only player for the Wolf Pack to log double-digit kills during the match, finishing with 27. Utah State mounted a comeback at the end of the set and fought off four Nevada set points behind kills from Anderson, a service ace from junior middle Carly Lenzen and a block by Anderson and sophomore middle Lauren O’Brien, before a final kill by Morrell evened the match at 1-1.

Anderson opened a three-point run by Utah State in the fourth set with back-to-back kills and Lenzen recorded another ace, giving the Aggies a 7-5 lead and an advantage that would hold throughout the set. The margin hovered between six and three points until a kill by Kamalu-Smith and a finishing block by Lenzen and senior setter Erica Moscoso clinched the match for Utah State, 25-19.

Defensively, Utah State recorded 10 more digs than Nevada (61 to 51) and was led by senior libero Hannah Gleason with 16, her fifth straight match with double-digit digs. She was followed closely by senior defensive specialist Maddie Day-Larsen with 14 digs, in what was a particularly meaningful outing in USU’s annual Dig For the Cure match.

Utah State will return to the road next week, facing Wyoming and Colorado State on Thursday, Oct. 27 and Saturday, Oct. 29, respectively. Fans can follow the matches via live stat and video links online at utahstateaggies.com. 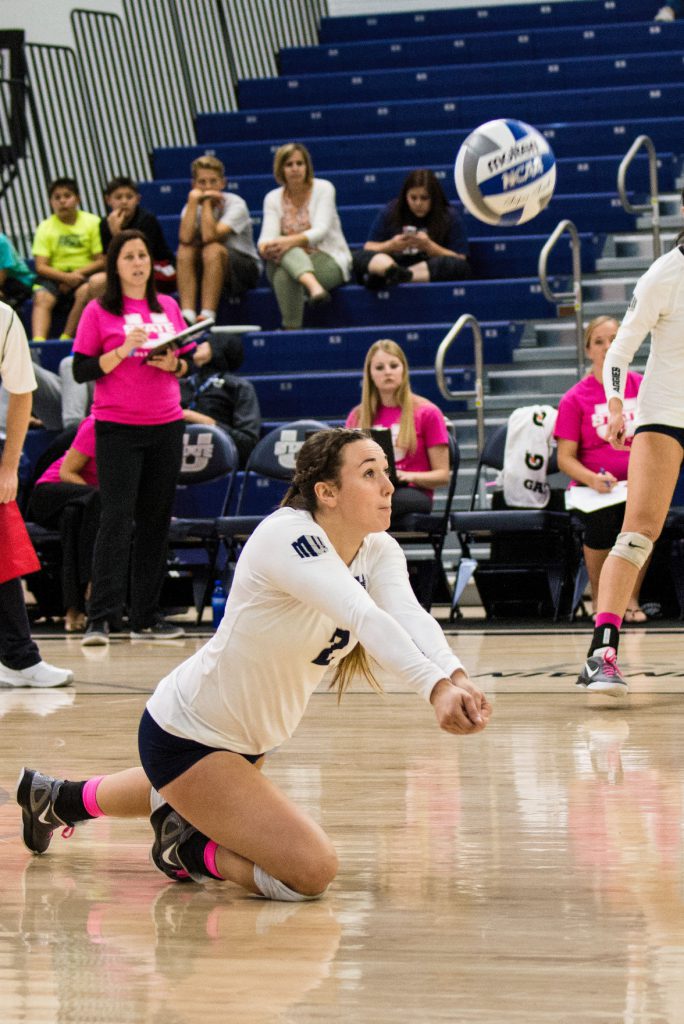 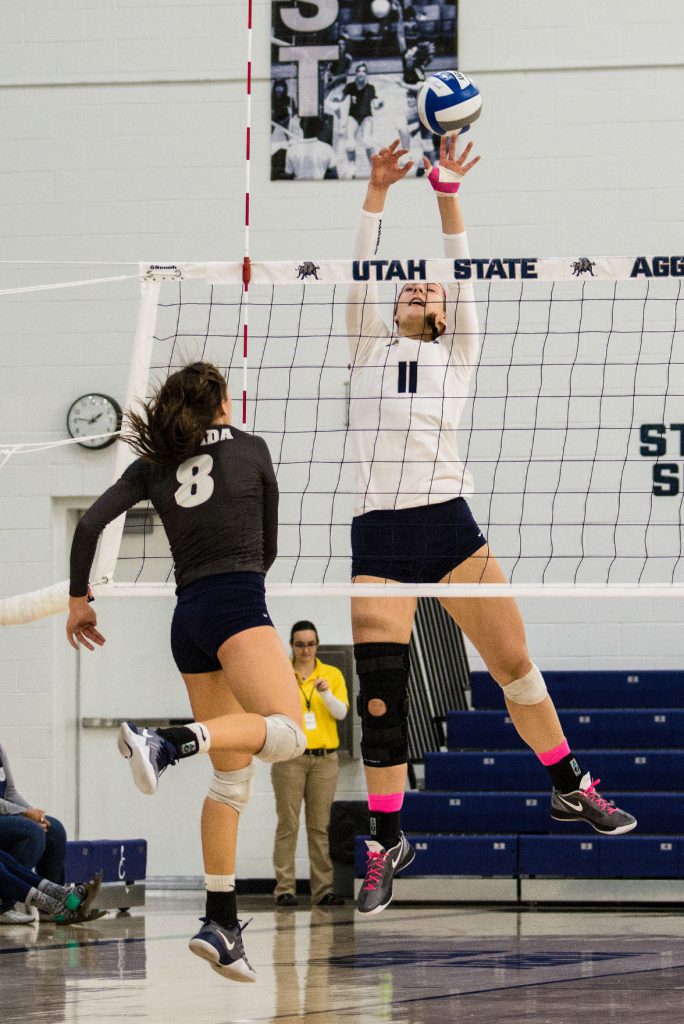 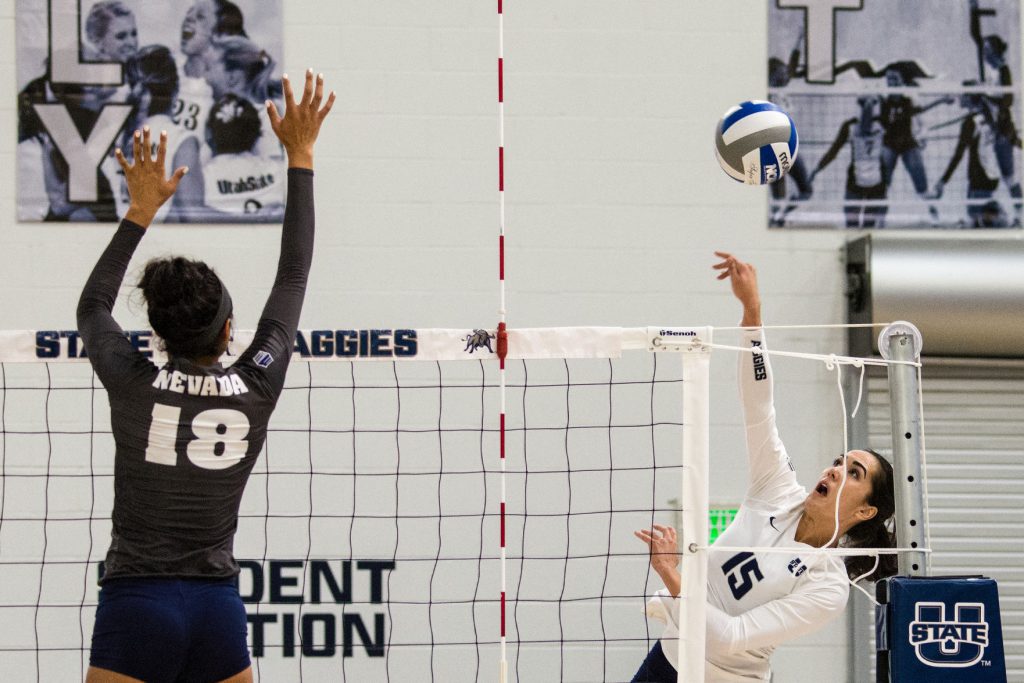 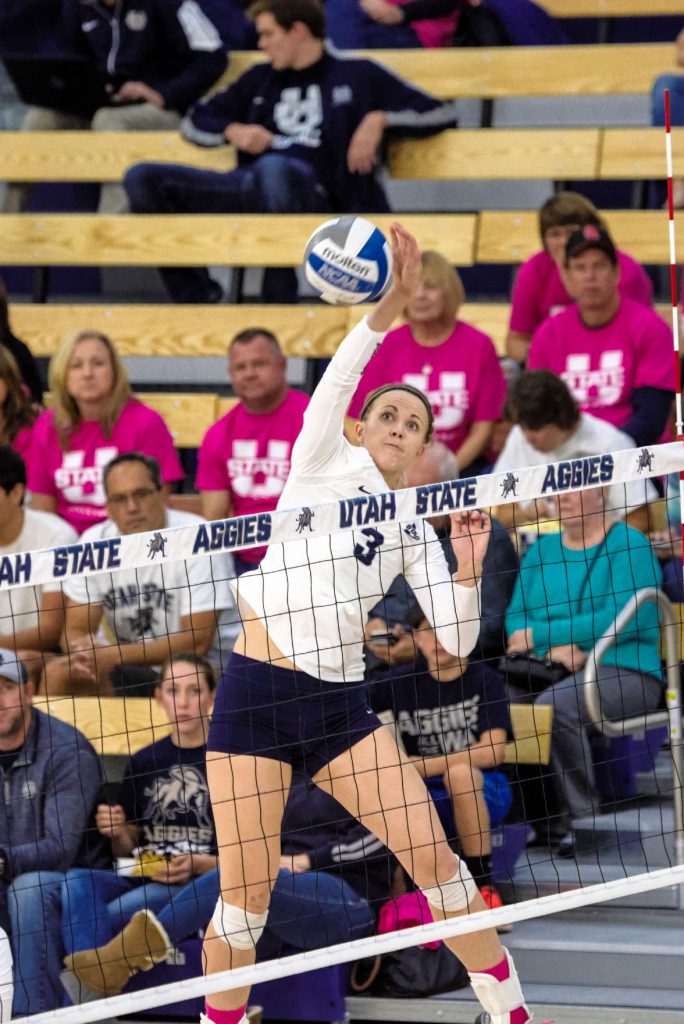 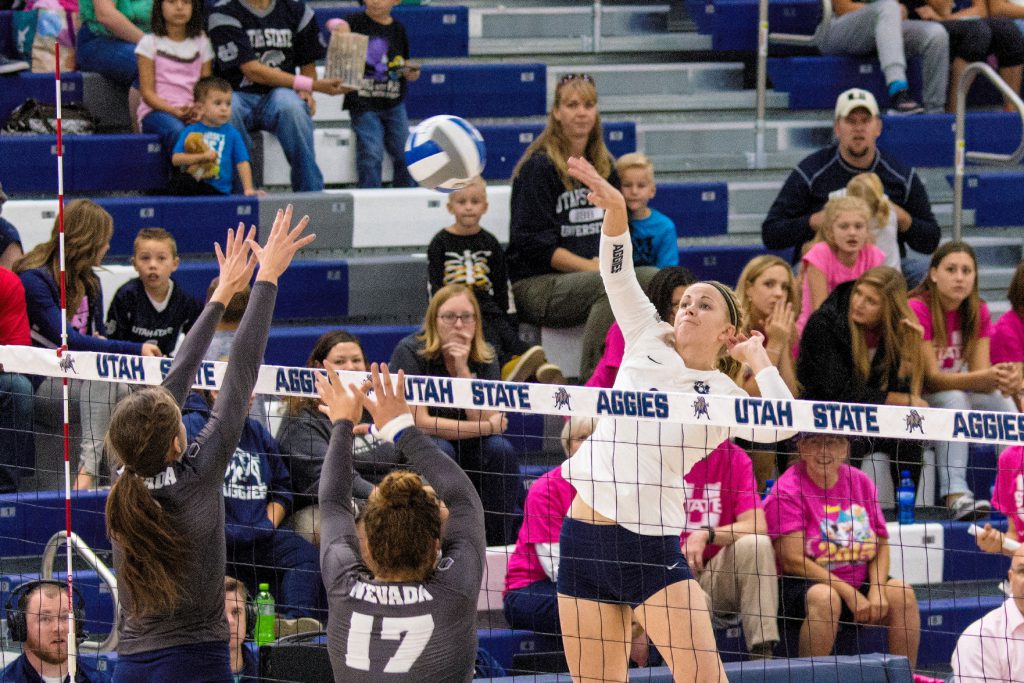 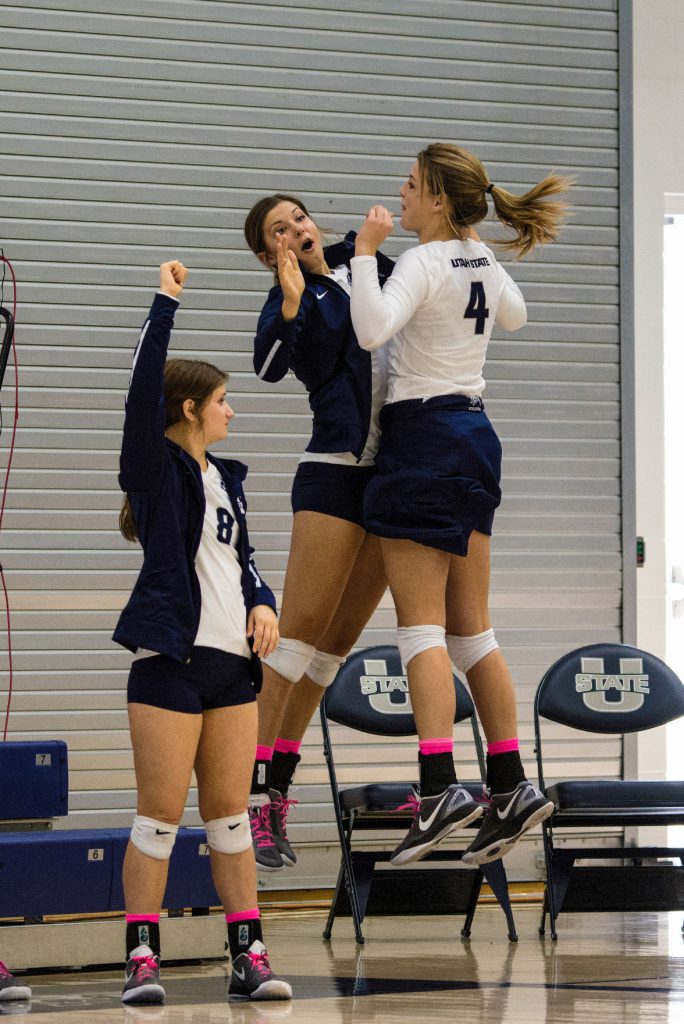 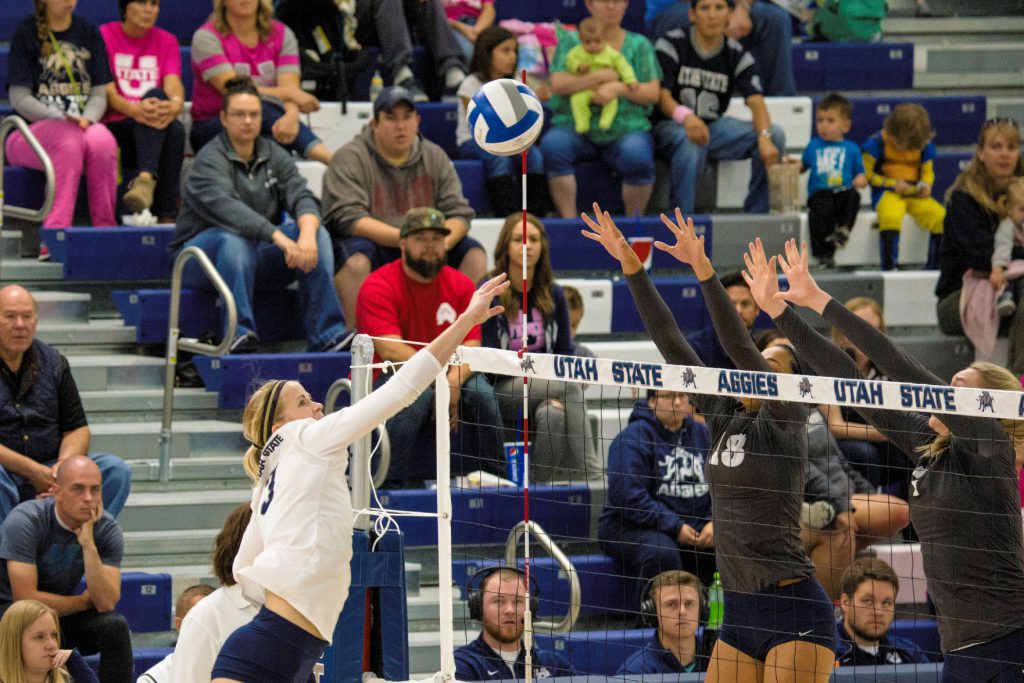 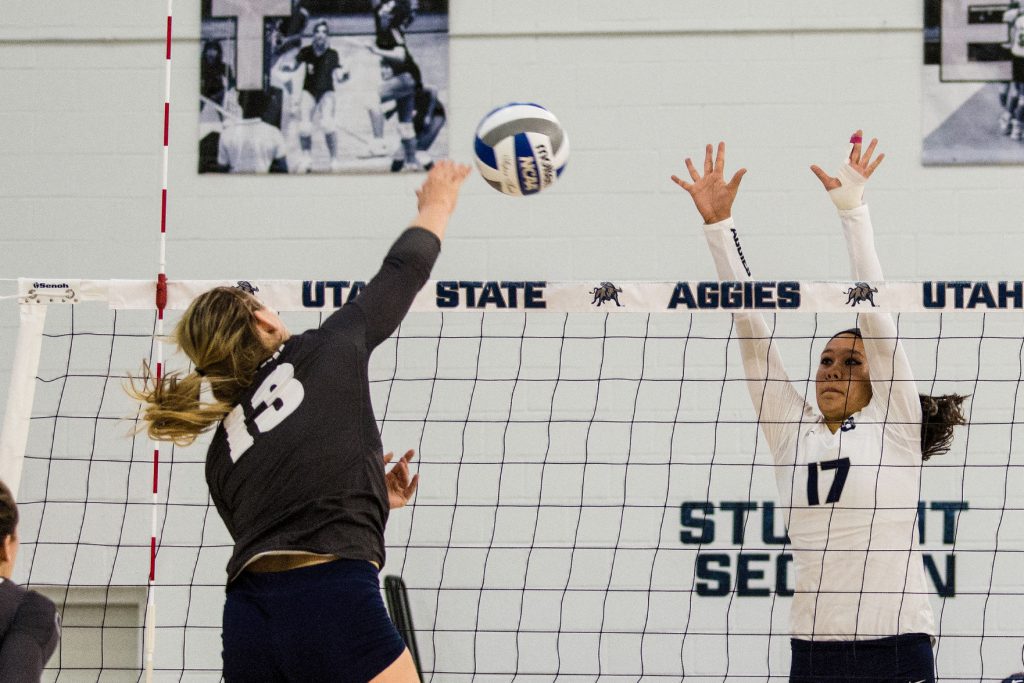 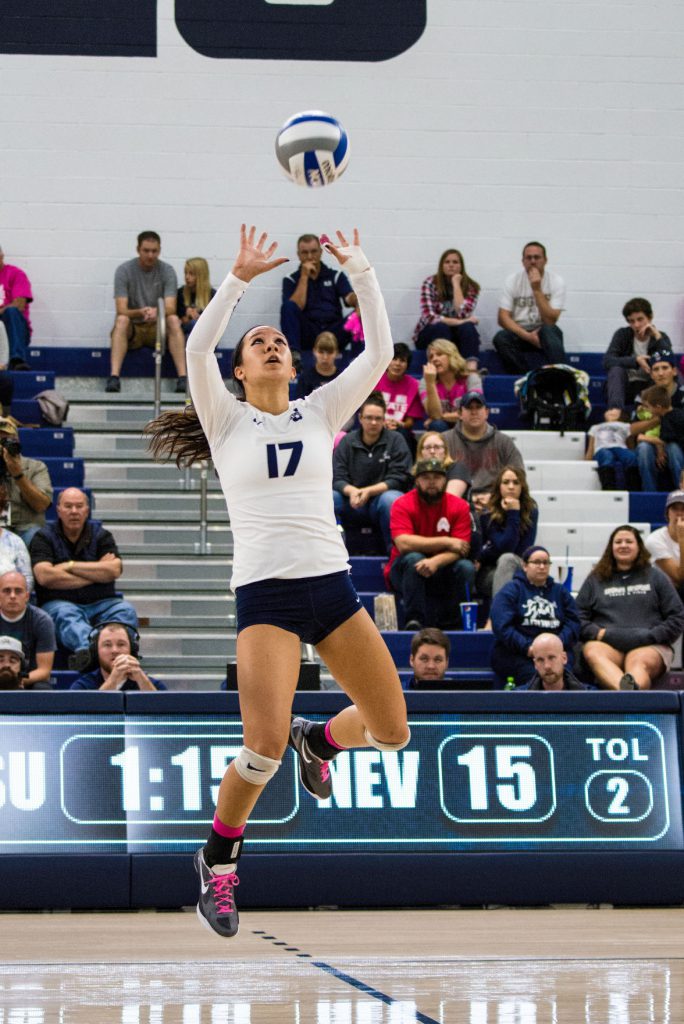 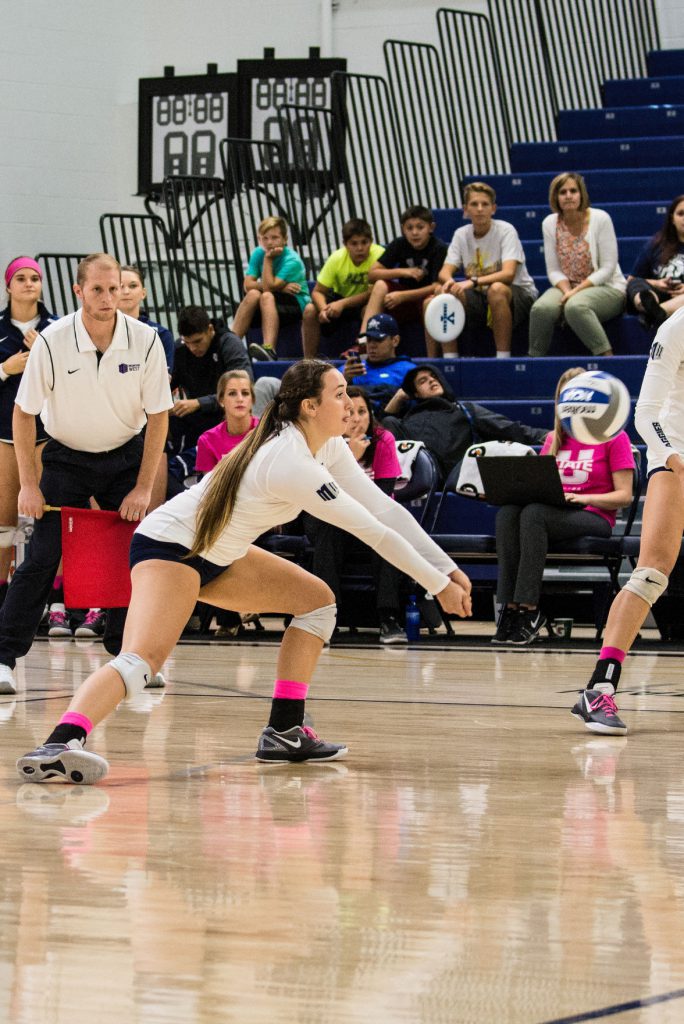 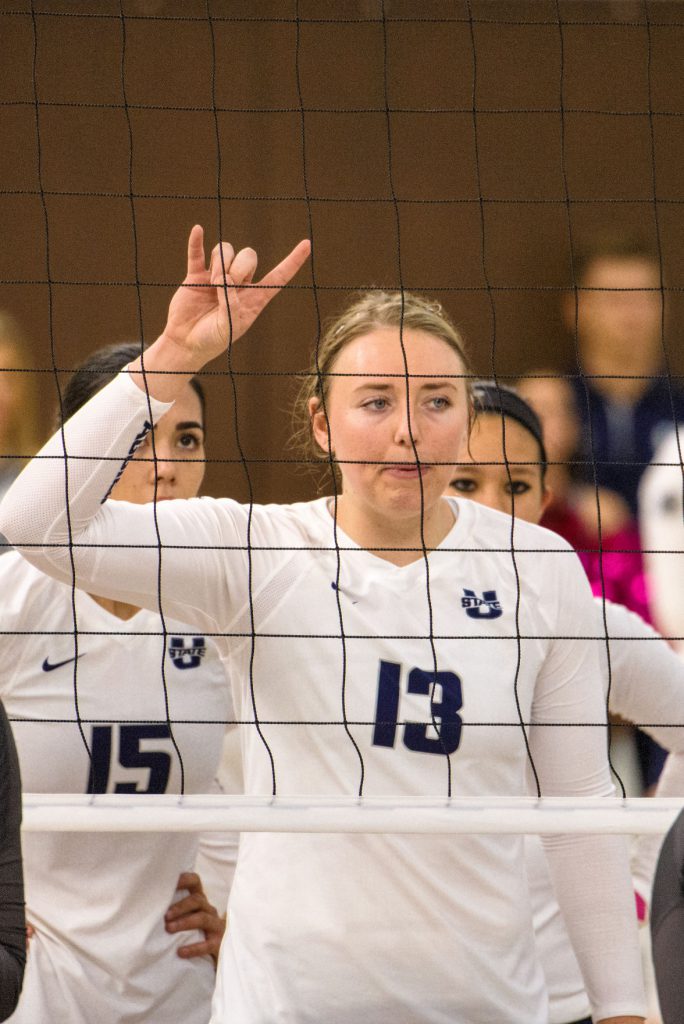 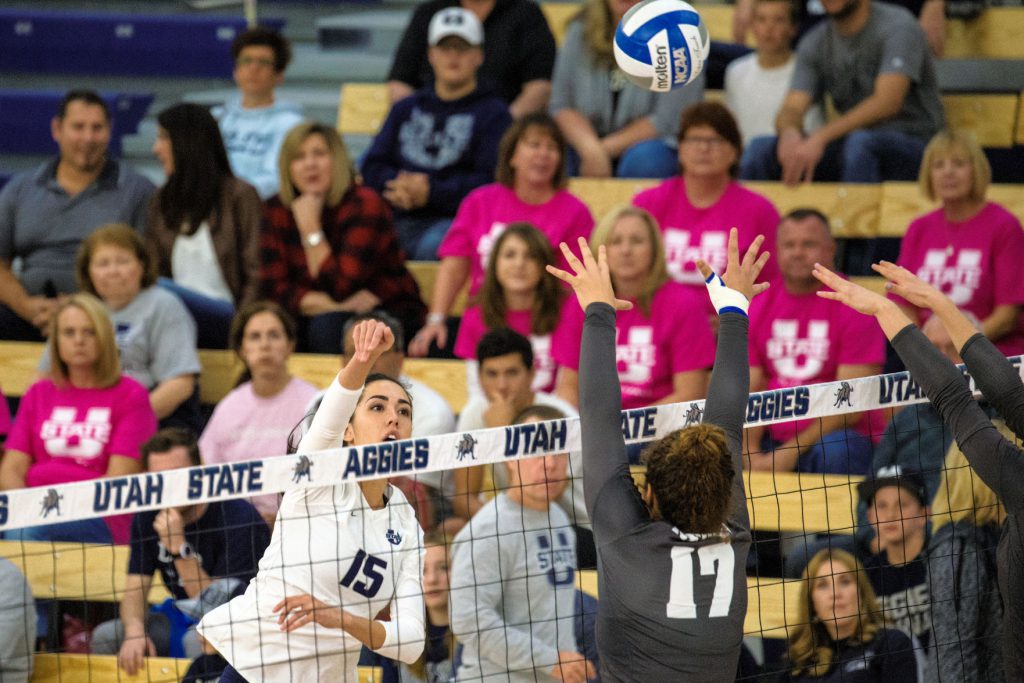 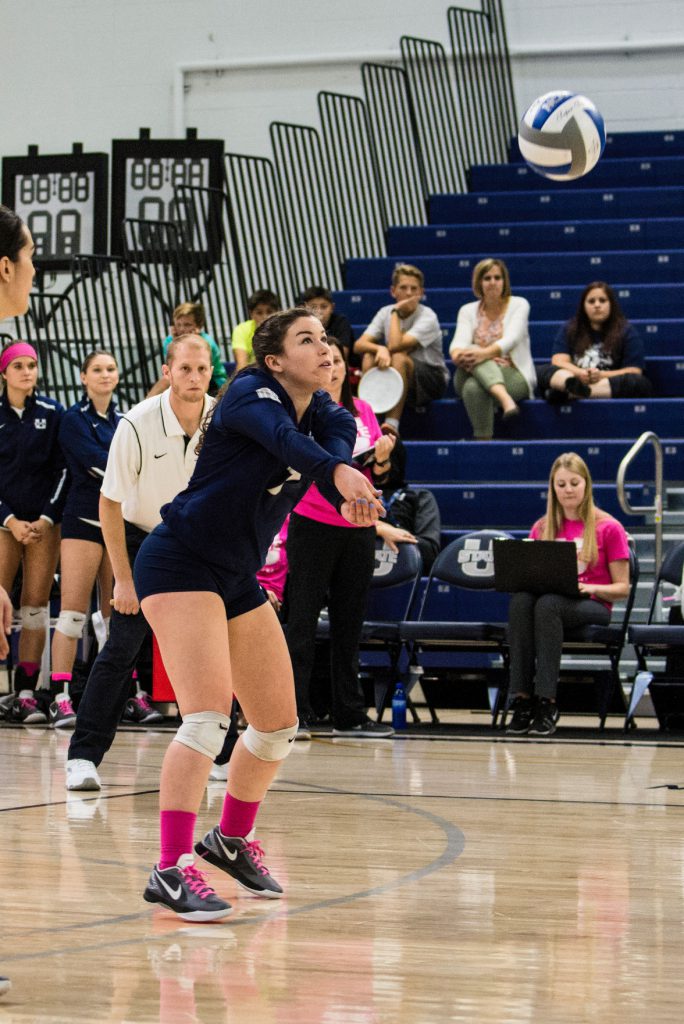 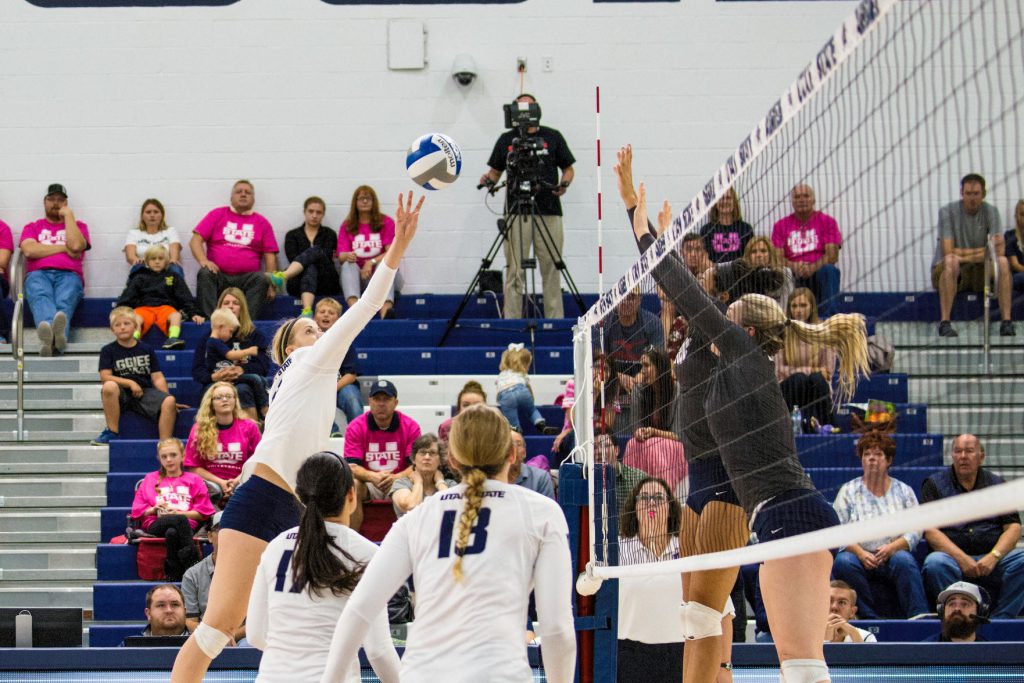 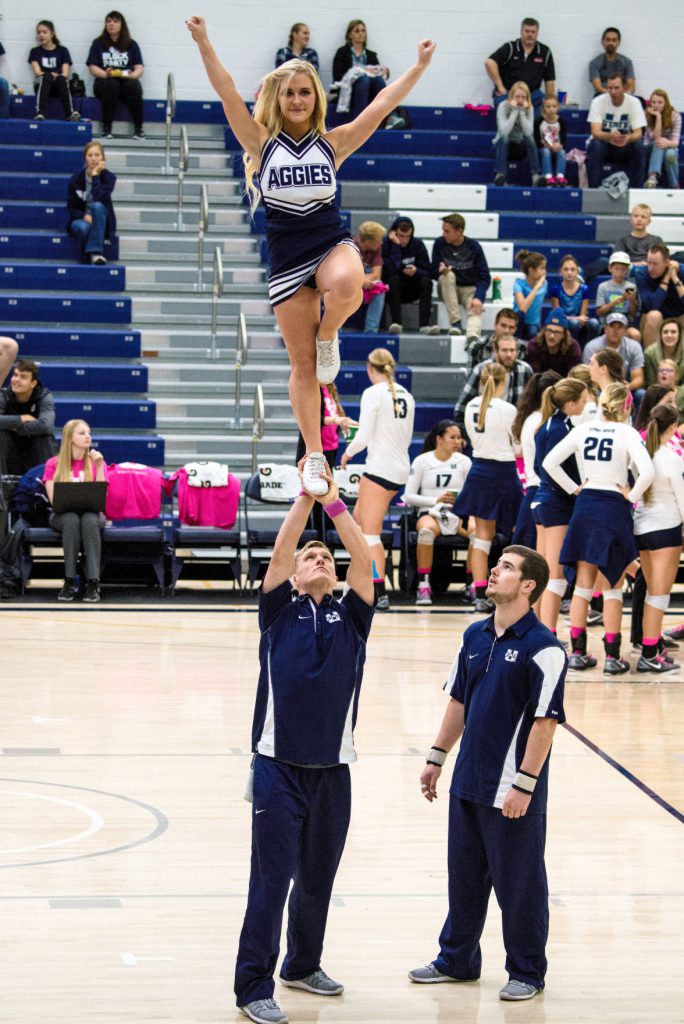 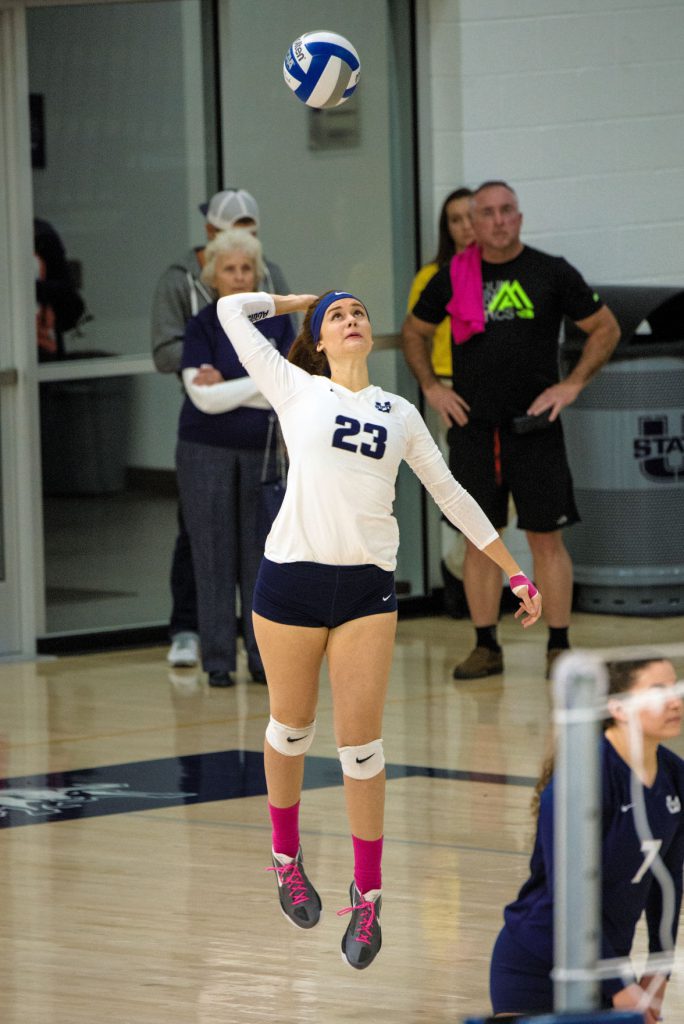 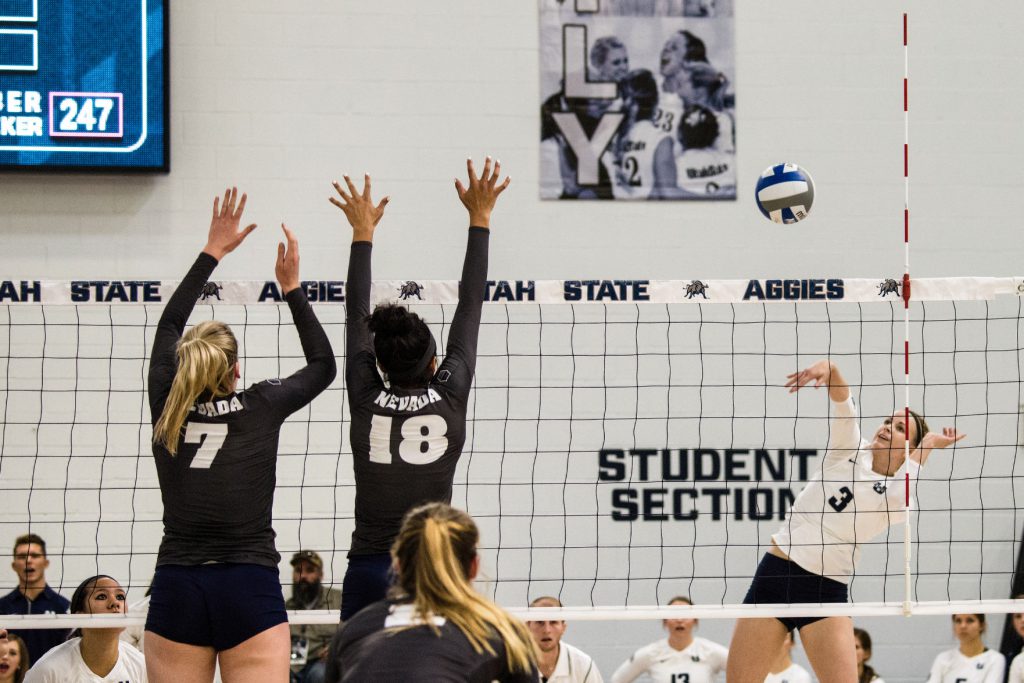