Wyoming's Tanner Gentry runs down the field on his way to score a touchdown as Utah State's Dallin Leavitt attempts to stop him during the first half of an NCAA college football game in Laramie, Wyo., Saturday, Nov. 5, 2016. (AP Photo/Shannon Broderick)

Wyoming built a 35-7 halftime lead, but Utah State scored three straight touchdowns to close within 35-28. Damion Hobbs’ second TD run, a 10-yarder to give Utah State its final points, was set up by Daniel Gray’s interception late in the third quarter.

Allen, who rushed for 66 yards, answered with a 37-yard touchdown pass to Jacob Hollister to make it 42-28 and the Cowboys then pulled away.

Tanner Gentry had scoring catches of 25 and 46 yards for Wyoming while Ron’Quavion Tarver made eight receptions for 104 yards for Utah State.

Wyoming’s Brian Hill, who entered the contest ranked third nationally with 144.5 rushing yards per game, added to his school-leading career total. He now has 3,725 yards in two-plus seasons.

Wyoming: The Cowboys could have been expected to suffer a letdown after the previous week’s 30-28 upset of then-No. 13 Boise State, but bolted to a 21-0 lead and held the Aggies to minus-8 yards in the first quarter. However, Utah State averted an early rout by scoring three straight touchdowns in the third quarter before Wyoming regained control in the fourth.

Utah State: The Aggies host New Mexico on Saturday in hopes of avenging a 14-13 loss in Albuquerque last year.

Wyoming: The Cowboys visit UNLV on Saturday, a team Wyoming has beaten in eight of the last 10 meetings, including the last three. 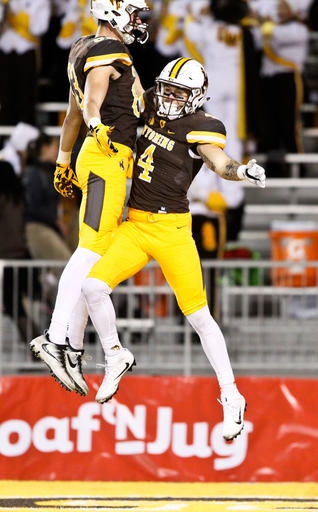 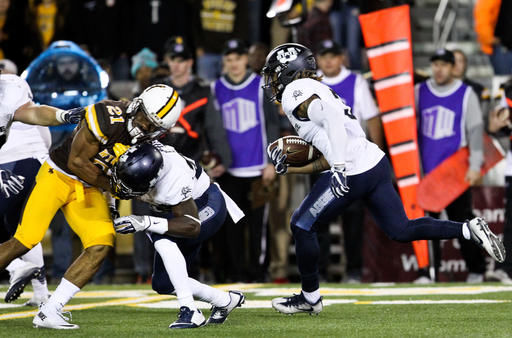