This image provided by NASA/JPL-Caltech shows an artist's conception of what the surface of the exoplanet TRAPPIST-1f may look like, based on available data about its diameter, mass and distances from the host star. The planets circle tightly around a dim dwarf star called Trappist-1, barely the size of Jupiter. Three are in the so-called habitable zone, where liquid water and, possibly life, might exist. The others are right on the doorstep. (NASA/JPL-Caltech via AP)

CAPE CANAVERAL, Fla. (AP) — For the first time, astronomers have discovered seven Earth-size planets orbiting a single nearby star — and these new worlds could hold life.

This cluster of planets is less than 40 light-years away in the constellation Aquarius, according to NASA and the Belgian-led research team who announced the discovery Wednesday.

The planets circle tightly around a dim dwarf star called Trappist-1, barely the size of Jupiter. Three are in the so-called habitable zone, the area around a star where water and, possibly life, might exist. The others are right on the doorstep.

Scientists said they need to study the atmospheres before determining whether these rocky, terrestrial planets could support some sort of life. But it already shows just how many Earth-size planets could be out there — especially in a star’s sweet spot, ripe for extraterrestrial life. The more planets like this, the greater the potential of finding one that’s truly habitable. Until now, only two or three Earth-size planets had been spotted around a star.

“We’ve made a crucial step toward finding if there is life out there,” said the University of Cambridge’s Amaury Triaud, one of the researchers.

The potential for more Earth-size planets in our Milky Way galaxy is mind-boggling. The history of planet-searching shows “when there’s one, there’s more,” said Massachusetts Institute of Technology astrophysicist Sara Seager.

“With this amazing system, we know that there must be many more potentially life-bearing worlds out there just waiting to be found,” she said.

NASA’s Thomas Zurbuchen, associate administrator for the science mission, said the discovery “gives us a hint that finding a second Earth is not just a matter of if, but when,” and addresses the age-old question of “Are we alone out there?”

“We’re making a step forward with this, a leap forward in fact, toward answering that question,” Zurbuchen said at a news conference.

Last spring, the University of Liege’s Michael Gillon and his team reported finding three planets around Trappist-1. Now the count is up to seven, and Gillon said there could be more. Their latest findings appear in the journal Nature.

This crowded yet compact solar system — 235 trillion miles away — is reminiscent of Jupiter and its Galilean moons, according to the researchers.

Picture this: If Trappist-1 were our sun, all seven planets would be inside Mercury’s orbit. Mercury is the innermost planet of our own solar system.

The ultracool star at the heart of this system would shine 200 times dimmer than our sun, a perpetual twilight as we know it. And the star would glow red — maybe salmon-colored, the researchers speculate.

“The spectacle would be beautiful because every now and then, you would see another planet, maybe about as big as twice the moon in the sky, depending on which planet you’re on and which planet you look at,” Triaud said Tuesday in a teleconference with reporters.

Years are exceedingly short in this star system — the planets take just 1 ½ to 20 days to orbit Trappist-1.

The Leiden Observatory’s Ignas Snellen, who was not involved in the study, is excited by the prospect of learning more about what he calls “the seven sisters of planet Earth.” In a companion article in Nature, he said Gillon’s team could have been lucky in nabbing so many terrestrial planets in one stellar swoop.

Altogether, astronomers have confirmed close to 3,600 planets outside our solar system since the 1990s, but barely four dozen are in the potential habitable zone of their stars, and of those, just 18 are approximately the size of Earth.

Gillon and his team used both ground and space telescopes to identify and track the seven Trappist-1 planets, which they label simply by lowercase letters, “b” through “h.” As is typical in these cases, the letter “A” — in upper case — is reserved for the star. Planets cast shadows on their star as they pass in front of it; that’s how the scientists spotted them.

Tiny, cold stars like Trappist-1 were long shunned by exoplanet-hunters (exoplanets are those outside our solar system). But the Belgian astronomers decided to seek them out, building a telescope in Chile to observe 60 of the closest ultracool dwarf stars. Their Trappist telescope lent its name to this star.

While faint, the Trappist-1 star is close by cosmic standards, allowing astronomers to study the atmospheres of its seven temperate planets. All seven look to be solid like Earth — mostly rocky and possibly icy, too.

They all appear to be tidally locked, which means the same side continually faces the star, just like the same side of our moon always faces us. Life could still exist at these places, the researchers explained.

“Here, if life managed to thrive and releases gases similar to that that we have on Earth, then we will know,” Triaud said.

Chemical analyses should indicate life with perhaps 99 percent confidence, Gillon noted. But he added: “We will never be completely sure” without going there. 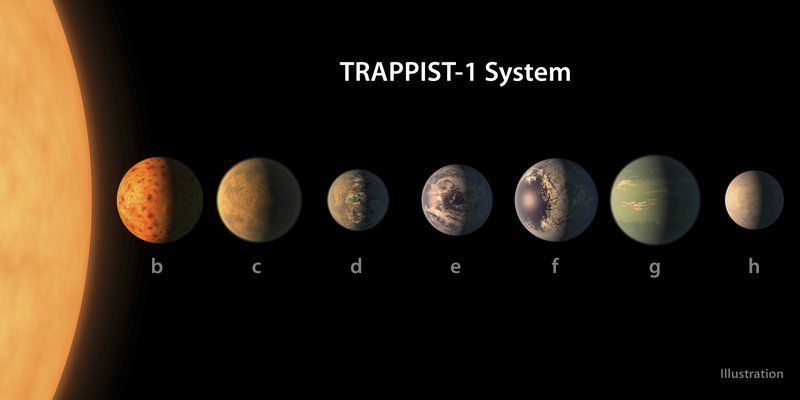 This illustration provided by NASA/JPL-Caltech shows an artist's conception of what the TRAPPIST-1 planetary system may look like, based on available data about their diameters, masses and distances from the host star. The planets circle tightly around a dim dwarf star called Trappist-1, barely the size of Jupiter. Three are in the so-called habitable zone, where liquid water and, possibly life, might exist. The others are right on the doorstep. (NASA/JPL-Caltech via AP) 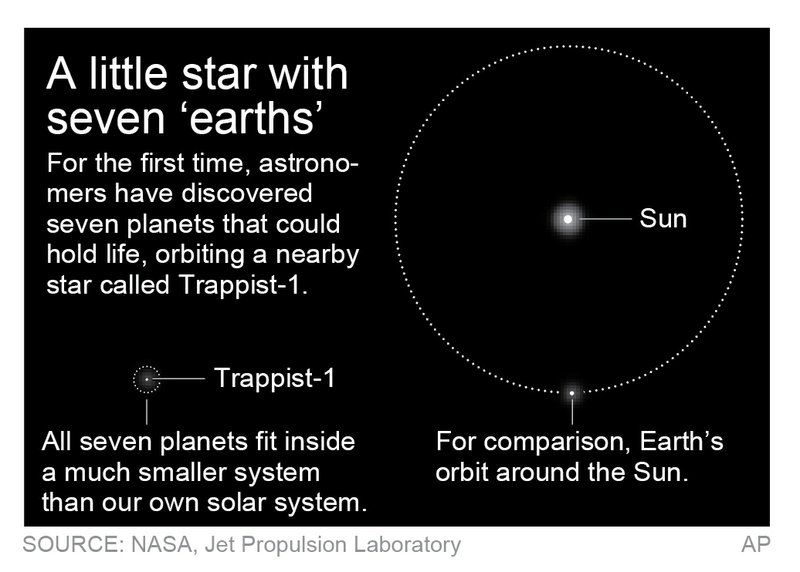