Portland Trail Blazers guard Damian Lillard acknowledges the crowd during the second half of the team's NBA basketball game against the Utah Jazz in Portland, Ore., Saturday, April 8, 2017. Lillard scored a franchise-record 59 points as the Blazers won 101-86. (AP Photo/Steve Dykes)

Lillard surpassed Damon Stoudamire’s previous record of 54 points with a step-back 3-pointer. The crowd on its feet, he raised his arms in celebration then pounded his chest.

The win kept the Blazers ahead of the Denver Nuggets for the eighth and final playoff spot in the Western Conference with just two games left.

It was Lillard’s 27th game with 30 or more points this season, a franchise high. Stoudamire set the previous franchise record for points on Jan. 14, 2005, at New Orleans.

Gordon Hayward had 21 points for the Jazz, battling with the Los Angeles Clippers for the fourth spot in the West and home court advantage. Before the loss to the Blazers, Utah had won five of its last six games.

The Jazz trailed by as many as 20 points early in the fourth quarter but cut it to 90-78 on Rudy Gobert’s jumper with 4:15 to go. Lillard answered with his eighth 3-pointer of the game. The crowd chanted “MVP! MVP!” at times for the rest of the game.

The two teams also met earlier this week. Gordon Hayward scored 30 points and Gobert added 20 points and 11 rebounds to lead the Jazz to a 106-87 victory.

Rodney Hood and Derrick Favors both sat out of that game because of knee soreness. Jazz coach Quin Snyder said both would play bench roles on Saturday, as they had the night before in Utah’s 120-113 victory at home against the Timberwolves.

The Blazers were without reserve guard Allen Crabbe because of left foot soreness. He had 25 points, including a career-high eight three pointers, in Portland’s 105-98 victory over the Minnesota Timberwolves on Thursday night.

Crabbe is averaging 10.7 points, 2.9 rebounds and 1.2 assists this season. The foot had been bothering him for a couple of weeks and an MRI revealed inflammation.

Portland big man Jusuf Nurkic, who sparked the team after coming over in a trade from Denver at the deadline, missed his fifth game because of a right leg fracture, but could return if the Blazers make the playoffs.

The Blazers led by as many as 19 point in the first quarter as the Jazz went cold, shooting 35 percent. Lillard had 26 points, matching his own franchise record for most points in a quarter.

The game was delayed in the second quarter when a woman collapsed on the court during a timeout. It was not clear if the woman was a fan or worked at the arena.

She was given oxygen and taken by stretcher from the court. Her condition was not immediately clear.

Gordon Hayward’s pull-up jumper got the Jazz within 46-37 late in the first half, and the Blazers led by just 48-42 at the break.

But the Jazz sustained a blow early in the second half when Raul Neto, who started the half in Dante Exum’s place, rolled his left ankle and left the game.

Neto was making his return after missing five games with a groin injury.

Trail Blazers: It was Lillard’s 75th career game of 30-plus to match Geoff Petrie for 2nd-most in team history. Clyde Drexler in No. 1 with 130. Lillard also became the fifth Blazer to score 2,000-plus points in a season.

Jazz: Utah visits the Warriors on Monday before closing the out the regular season at home on Wednesday against the Spurs.

Trail Blazers: The Blazers wrap up the regular season at home with a San Antonio on Monday and the Pelicans on Wednesday. 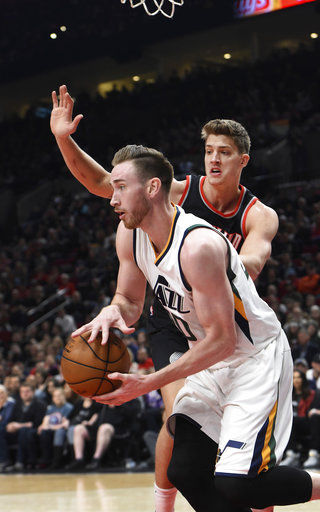 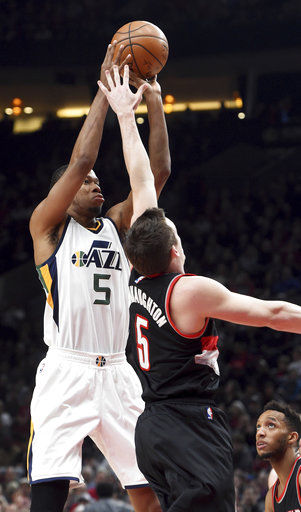 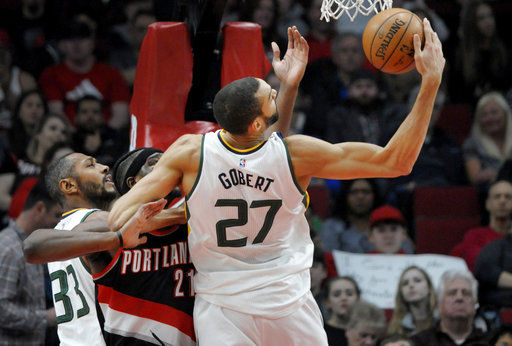