Derek Miller, president and CEO of <a href=”https://www.wtca.org/world-trade-center-utah”>World Trade Center Utah</a>, was a featured presenter during the <a href=”http://www.cachebusinesssummit.org/”>Cache Business Summit</a> in Logan on April 20, speaking during a breakout session on the subject of “President Trump and the Global Economy: Does Utah Win or Lose?” Later Thursday afternoon, Miller was a guest on KVNU News’ “For the People” show, speaking with host Jason Williams on the same topic.

Considering the new Trump administration’s position on trade, Williams’ first question to Miller opened a dialogue about the strength of Utah’s economy.

“As you’ve watched this play out, what’s it like in your position?”

“Our economy is firing on all cylinders. We’re the fastest growing economy in the U.S.,” he said. “We’re the best place for business in the U.S., [with] one of the lowest unemployment rates. Trade is a big part of that.”

Last year, said Miller, the state of Utah exported over $12 billion in goods and services, making the state the sixth fastest-growing export economy in the country. Miller said the designation is remarkable.

“When you think about it, we’re 3 million people somewhere in the middle of the Rocky Mountains with no seaport in sight,” he said, “and yet our awesome Utah businesses are figuring out a way to be competitive in the global marketplace, and not just compete, but compete and win.”

When Williams asked Miller with whom Utah businesses compete, Miller’s answer was “everyone.” Despite this challenge, he said Utah companies have found a way to be successful in the free market.

“You have to carve out a niche,” he said, “figure out how to make the next best widget better and faster and stronger and cheaper, exactly what capitalism requires, and Utah companies have figured out how to be very competitive.

As the discussion shifted to focus on the Trump administration, Williams noted that the U.S. economy could see many future changes, asking Miller to explain how much the direction the Trump administration takes with regard to trade might impact Utah’s economy. Miller was quick to note that one of the few things Trump and Clinton had in common during the election cycle was they both ran against trade, arguing that trade was “hurting the U.S. and was a negative thing.”

Since the election, however, Miller said President Trump has taken a softer tone, shifting his emphasis from anti-trade rhetoric more toward fair trade, something Miller fully supports.

“Trade needs to be rule-based,” he said. “Companies need stability, predictability. They need to understand what the rules of the game are.”

At the same time, Miller disagrees with the president when Trump says the U.S. should not be trading with the world.

Miller said he is grateful to see the president move away from discussions about tariffs. He’s also glad to see Trump have open discussions with President Xi Jinping with regard to the $350 billion trade imbalance the U.S. currently has with China. With the leaders’ discussion last week of a 100-day plan to reduce trade barriers between the two nations, Miller said the proposal will allow more Utah companies to export their goods and services to China.

“The timing couldn’t be better,” he said, “because China’s economy is transitioning from a development economy to a consumer economy. Those consumers are going to need goods, and we want them to be buying Utah goods.”

While Miller said he believed the president used a focus on tariffs as an effective way to “get attention” during his campaign, he said the Trump administration is now talking more about fair trade than about trade wars and more about reducing trade barriers versus raising tariffs.

“That’s good for Utah because we have a lot at stake,” he said. “We have thousands of businesses in the state of Utah and 85 percent of them are small. We don’t want anything coming out of Washington that would upset the apple cart as far as Utah’s economy would go. President Trump has said he’s for an American First Policy, and I’m for that too, as long as it doesn’t put Utah last.”

Williams ended the conversation with a teaser, hinting about speculation that Miller may make a future run for United States Senate.

“Always an interesting question, isn’t it?” Miller volleyed back. “You’ll be the first to know if I make that decision.” 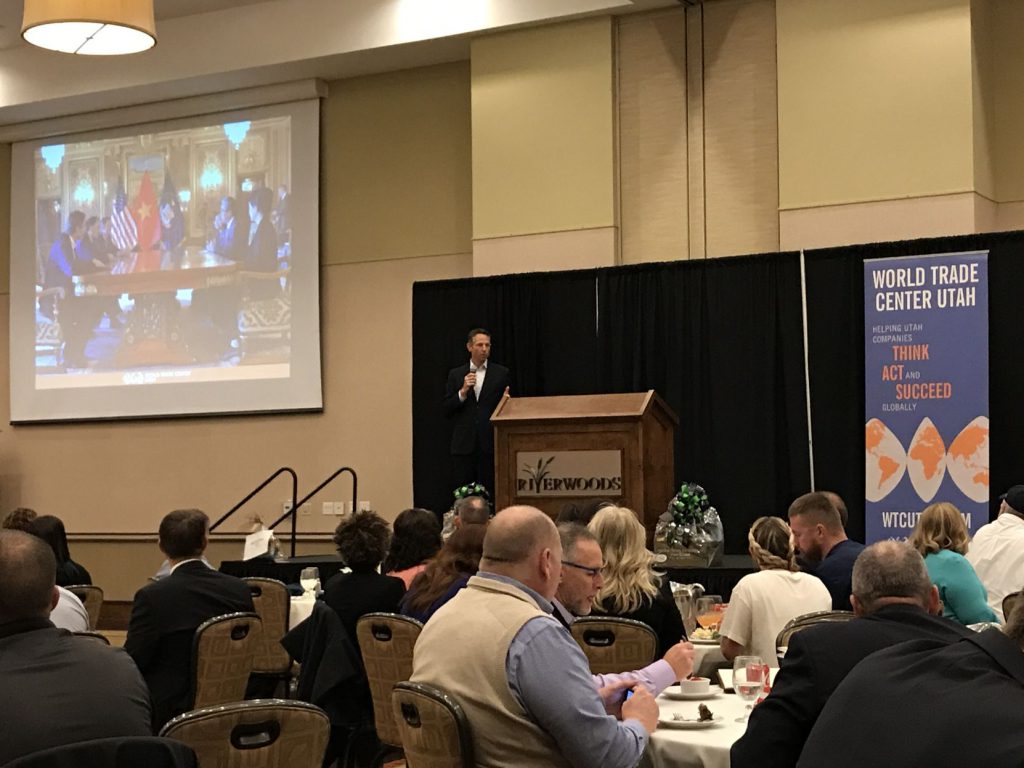