LOGAN – It is a busy time at Utah State University. Spring semester is winding down while students finish projects and study for exams.

Jalen Moore is one of those students caught trying to balance life with a busy school schedule. In addition to preparing for graduation this spring, he is also trying to impress NBA scouts.

The 6-foot-9 senior Aggie wing has hired an agent and declared for the NBA draft. On <a href=”http://610kvnu.com/podcaster/the-full-court-press” target=”_blank”>Friday’s Full Court Press program</a>, he talked about balancing school with his NBA workouts, his hopes of playing professional basketball and his memories of his time with the USU basketball team.

His schedule can be hectic. He does many of his workouts in Highland, more than 100 miles south of campus. Less than 10 days ago he was participating in the Portsmouth Invitational, a senior-only basketball showcase in Virginia.

“All 30 NBA teams were there,” he said. “They would watch all the games. You had a lot of free time in the morning and teams would interview you. I got to get interviewed by nine different teams, so I got different feedback from teams like that, what they liked about me, what I need to work on.”

Every player invited to the Portsmouth Invitational, like Moore, is an aspiring professional basketball player. He said feels he did well at the event, but said it was different not being the go-to guy like he was used to with USU.

“It’s tough going from being a guy that is like a superstar player to trying to find your role at the next level,” he said.

Moore’s next steps are to keep conditioning while he waits for phone calls from his agent. Those calls often mean an individual workout opportunity with a team. During an individual workout, Moore will travel and meet with the NBA team’s staff, then get two hours to showcase what he can do.

“The main thing is playing hard and trying to impress those guys,” he said. “You’ve only got a couple of hours to do it while you’re there.”

All of this isn’t completely new for Moore, he did a lot of it last year as well. After his junior season he declared for the 2016 NBA draft to “test the waters.” That led him to individual workouts with the Memphis Grizzlies, the Brooklyn Nets, the Minnesota Timberwolves and the Utah Jazz. He said he knows a little bit more of what to expect.

“I got feedback from (the scouts),” he said, “which was come back, expand your range, make it more consistent when you shoot 3s. Get stronger in the weight room, stuff like that. So when I came back to school after that summer, that is pretty much what I had worked on, just what they had told me.”

Moore said he worked all of the tips from NBA scouts into his senior season. He has also tried to apply advice given to him by his father, Jimmy Moore, a former NBA player who also played basketball at USU.

“He’s always like, ‘Make sure you keep your confidence, you don’t ever want to lose your confidence,’” Jalen said of his father. “’When you’re playing on the court make sure you always play hard, give it your best effort, do what you are capable of doing to the best of your ability, you know. Don’t do anything you ever wouldn’t normally do.’”

Moore was one of only three seniors on this year’s USU team, and the only one that was around each of the last four years, despite starting as a freshman with several others. He said transfers are becoming more common in college basketball, but he never considered leaving. Even though he had a lot of teammates transfer, he said he doesn’t hold grudges against any of them. He believes that being thrown into a leadership role at a younger age benefited him.

“It is what it is, people transfer all the time now, so it’s nothing too crazy,” he said. “When players transfer they do what is best for them. That is how I look at it. The thing about (former USU forward) David (Collette), we’re still friends, I’m not going to hold a grudge against him.”

He said he is happy to be receiving a degree from the school he always wanted to go to, and that some of his best memories include playing with his brother and breaking one of his dad’s USU scoring marks.

“That was a cool experience for me,” he said. “Passing my dad on the all-time scoring list was cool for my family. I think he wanted that to happen.”

Moore said he thinks the USU program is in good hands, and that he will continue to follow the team as closely as he can. 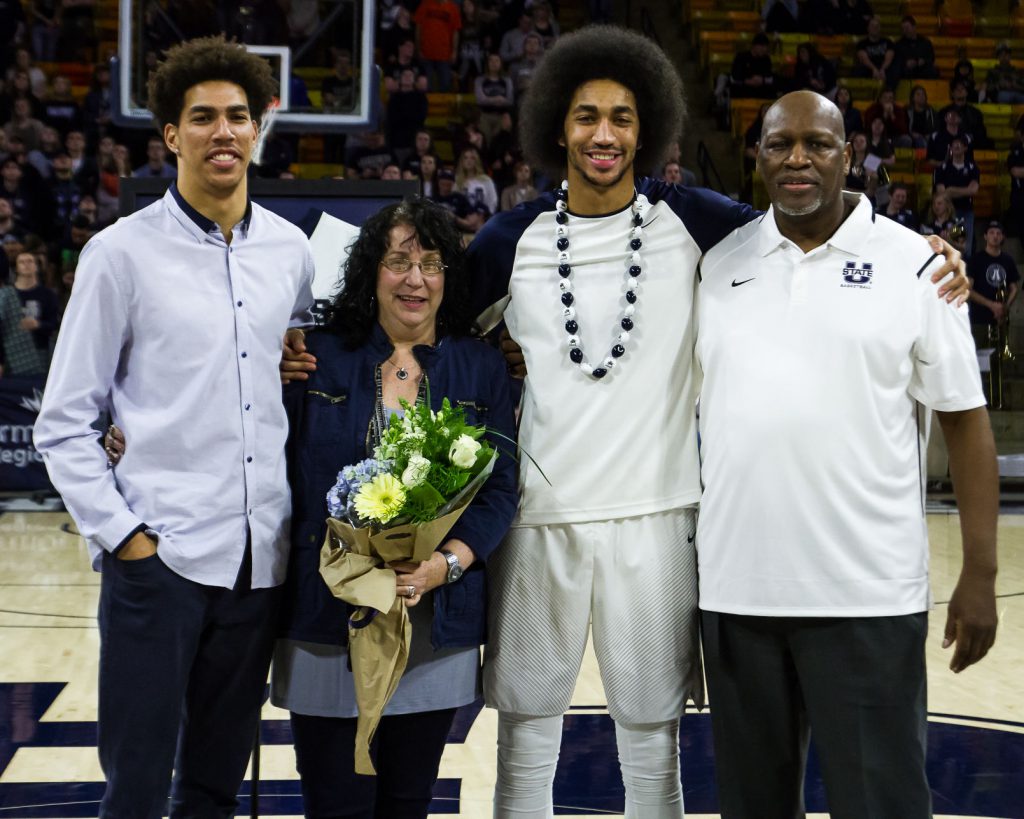