OAKLAND, Calif. (AP) — Stephen Curry scored 22 points in three quarters of work and the top-seeded Golden State Warriors warmed up in a hurry after a weeklong layoff between playoff games, beating the Utah Jazz 106-94 on Tuesday night in the opener of the Western Conference semifinals.

Kevin Durant added 15 points on an uncharacteristically cold shooting night at 6 for 14 and also five rebounds and five assists. He missed the middle two games against Portland because of a strained left calf then returned for 20 minutes in Game 4. Zaza Pachulia scored 10 points in 14 minutes.

Rudy Gobert had 13 points, eight rebounds, two blocks and a Flagrant 1 foul on Green in the fourth for the Jazz, who just finished off the Clippers in a seven-game series Sunday while the Warriors waited after eliminating Portland in a sweep April 24.

Game 2 in the best-of-seven series is Thursday night back at Oracle Arena, where it was a night of nostalgia as Golden State honored its 2007 “We Believe” team that ended a 13-year playoff drought and stunned Dallas in the first round.

Green insisted it might take the Warriors a quarter or so to find their rhythm as they finally got to play again. They weren’t sharp from 3-point range while going 7 for 29, with Klay Thompson making three of those on the way to 15 points.

Interim coach Mike Brown led the Warriors as they are missing reigning NBA Coach of the Year Steve Kerr, who wasn’t at the arena as he deals with complications from a pair of back surgeries nearly two years ago. He also missed the last two games of the Portland series.

How fitting much of the “We Believe” team was in the house one day shy of the 10-year anniversary of eighth-seeded Golden State’s first-round upset of the No. 1 seed Mavericks.

“We all had something to prove. We believed in each other and we wanted each other to prove people wrong,” Stephen Jackson said, then added of the current Warriors, “They’re way past believin’.”

After that, it was Jazz-Warriors in the Western Conference semifinals and Utah won in five games. Current Warriors forward Matt Barnes was part of that team, and he checked in with 4 minutes remaining to a rousing ovation after being sidelined since April 8 with a sprained right foot and bone bruise.

“It kind of means a little bit more to me because I was the only one to wear that same uniform, the old-school colors, the old-school logos,” Curry said. “When I first got here that’s what everybody talked about, ‘Can you all do what the We Believe team did?'”

Jazz: F Derrick Favors, who was questionable with lower back soreness, came in late in the first. … Utah missed its initial six shots and fell behind 9-0 before Gobert’s three-point play at the 7:48 mark of the first. … The Jazz held a 44-37 rebounding advantage.

Warriors: Golden State never trailed and all five Warriors starters scored in double digits for the second straight playoff game. … Curry’s third-quarter steal broke Rick Barry’s record (105) for most in the postseason by any Warriors player. … Curry also hit his 262nd career postseason 3-pointer, moving past Robert Horry for ninth place on the NBA’s all-time list. … Shaun Livingston, who sprained his right index finger in Game 1 against Trail Blazers, made a pretty pass to Andre Iguodala for a first-quarter dunk and grabbed at his tender hand afterward. But he played 20 minutes. 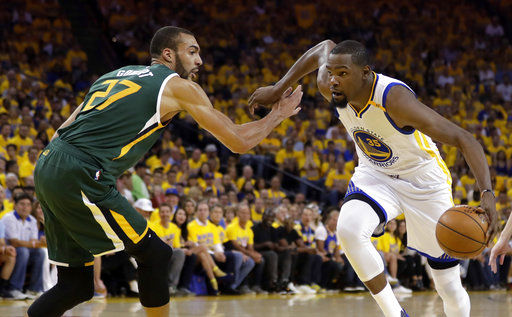 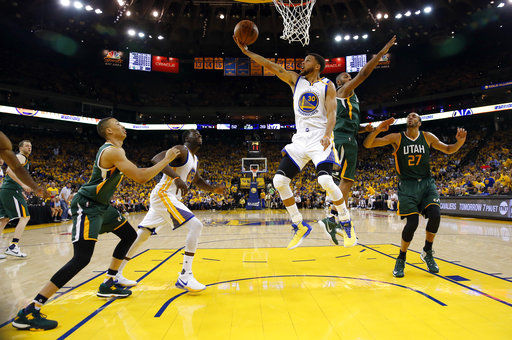 Golden State Warriors' Stephen Curry (30) scores against the Utah Jazz during the first half in Game 1 of an NBA basketball second-round playoff series, Tuesday, May 2, 2017, in Oakland, Calif. (AP Photo/Marcio Jose Sanchez)