The defending Western Conference champions have won both their series in four games and now await the winner of the Rockets-Spurs series that is tied at 2-2.

The Warriors kept pace with defending champion Cleveland in what has appeared like an inevitable third straight NBA Finals matchup. Both teams are 8-0 thus far.

Interim head coach Mike Brown said before the game he hoped his team would get out to a fast start and the Warriors did exactly that. Golden State led 39-17 at the end of the first quarter after an onslaught from Klay Thompson and Curry. They combined to shoot 6 for 8 in the opening period.

Gordon Hayward led the Jazz with 25 points and Shelvin Mack chipped in 18.

Curry entered the game averaging 26.7 points in the playoffs, but Thompson had struggled against the Jazz. That ended Monday.

Thompson rebounded from a six-point effort in Game 3 with back-to-back jumpers out the gate. Curry then drained consecutive 3s and the rout was on.

The Jazz started 3 for 16 from the field as Golden State hit from all areas and finished shooting 57.1 percent in the first quarter.

Curry picked up right where he left off after an 11-point fourth quarter in Game 3 with a 14-point first quarter. He, Thompson and Green combined for 29 points in that first 12 minutes.

The Jazz tried to put off their vacation. They used a 14-0 run early in the second quarter, sparked by the suddenly active Dante Exum and Derrick Favors, to cut the lead to 10 points. Utah closed the half with a 12-2 run to trail 60-52 at halftime, but every time the Jazz made a significant run the rest of the way, the Warriors answered and pushed the lead back to double digits.

The Jazz never led Monday and in three of the four games against the Warriors.

Utah isn’t much for moral victories, but the franchise finishes the season after ending a four-year playoff drought. Hayward developed into an All-Star and Rudy Gobert became a Defensive Player of the Year candidate. The addition of veterans George Hill, Joe Johnson and Boris Diaw to the young corps of Hayward, Gobert, Favors, Hood and Joe Ingles turned into the team’s first second-round appearance since 2010.

Warriors: Eight consecutive wins to start a postseason is a franchise record. … If Golden State wins the next round, it will be the first time in franchise history it has gone to three consecutive NBA Finals.

Jazz: Utah scored more than 17 first-quarter points just once in the series. … Utah’s 35 second-quarter points matched a 2017 postseason high for one quarter. … Hood left the game with a right knee sprain in the fourth quarter and did not return. … Gobert had his third consecutive double-double with 12 points, 13 rebounds.

George Hill missed his third consecutive game with a left big toe sprain after being a game-time decision. Mack started in his place. The injury has lingered throughout the season and kept the ninth-year veteran from 16 regular-season games. The Jazz were 18-15 during the regular season when Hill missed games.

Warriors coach Steve Kerr remains out after having a spinal cord leak procedure at Duke University on Friday. There is no timetable for his return. Kerr had back surgery about two years ago and has been dealing with complications. Brown took over as acting coach for Game 3 of the first-round series against the Portland Trail Blazers. 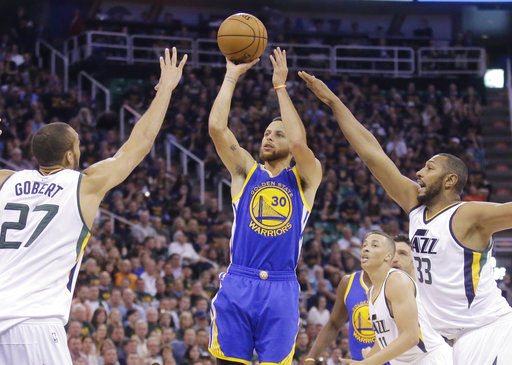 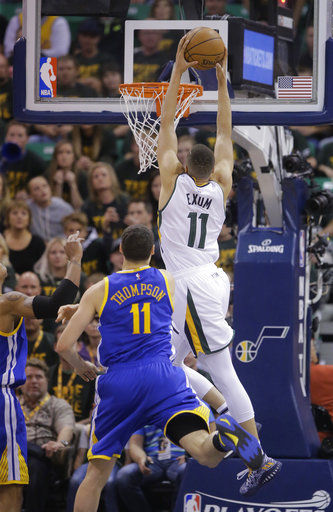 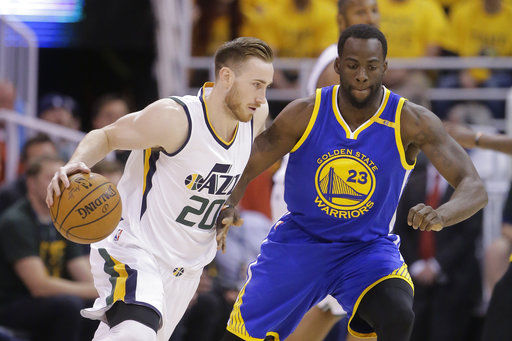