Judge Angels F. Fonnesbeck listens to testimony during a hearing to determine if a teen charged with attempted murder in the shooting of Deserae Turner will be bound over to the adult court on Tuesday in Logan.

LOGAN — A judge will rule Wednesday morning whether the teenage boy accused of shooting Deserae Turner will be tried as an adult. Judge Angela Fonnesbeck said she needed time to review testimony and evidence presented during the two-day transfer hearing that concluded Tuesday afternoon.

Earlier in the day, the defendant’s father testified how his son struggled in school, and at times was depressed because some of his close friends moved away. He also discussed finding a suicide note, the teen wrote when his parents took his phone away. He said the defendant called it a childish thing, when he and the defendant’s mother asked him about it. The father talked about picking up his son on the night Turner was shot. He said the boy seemed quit and didn’t act like he wanted to talk.

During cross examination, state attorney Spencer Walsh asked, what it felt like when deputies told him, the teenager had confessed to shooting Turner?

The father replied, “It was a kick in the gut. It was hell.” He then described walking into the interrogation room and seeing his son crying with his head in his hands.

Later the defendant’s mother described how her son was soft, gentle and played the peace maker role in their family. She described seeing him and the co-defendant come home from school on the afternoon of the shooting. She said they went downstairs into the teen’s bedroom and she didn’t see him until later that night.

Prosecutors later called a classmate of the defendant’s. He said you never wanted to get in the teen’s way because he always had a knife on him, and would sometimes brandish it. He described how the defendant bragged about trapping an animal and hurting it, and also discussed how easy it would be to carry out a school shooting.

Deserae Turner’s mother, April later took the stand. She spoke about how her daughter has lost the use of the left side of her body, particularly her arm and hand, since being shot in the head. She said the girl has had to learn how to do everyday tasks again and lost interest in playing the saxophone.

The defendant was seen crying and wiping his eyes with a tissue during her testimony.

Prosecutors final witness was Smithfield City Police detective Brandon Muir. He described to the court videos of assassinations that were found in the defendant’s cellphone history. There was also searches done about different serial killers.

During closing arguments, defense attorney David Perry told the court the defendant is sorry for what he has done. Becoming emotional himself, he continued that everyone was sorry for the pain caused to Turner, but he asked are we going to help the situation by sending the defendant to prison for the next 20-years?

Cache County Attorney James Swink said the shooting was premeditated and cowardly. He told the court the boy posed a huge risk to society and needs to be incarcerated for a substantial amount of time. He concluded that charging the teenager as an adult would give the community time to heal, and give officials time to figure out why the defendant committed the crime.

Judge Fonnesbeck ordered the defendant to appear again at 10 a.m. Wednesday, when she will rule whether he will be tried as an adult or remain in the juvenile court system. The 16-year-old is charged with attempted aggravated murder, attempted burglary four charges of obstructing justice.

On Monday, Judge Fonnesbeck ruled that the co-defendant in the case would be tried as an adult. He is expected to be arraigned in 1st District Court on Thursday afternoon. 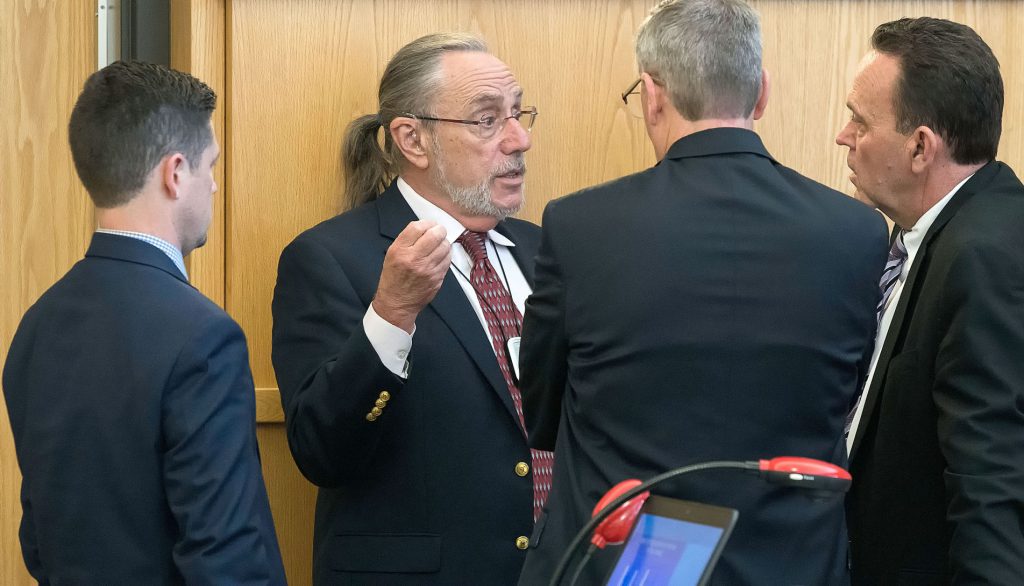 Dr. Stephen Golding talks with lawyers Spencer Walsh, left, James Swink, and David Perry, right, during a hearing to determine if a teen charged with attempted murder in the shooting of Deserae Turner will be bound over to the adult court on Tuesday in Logan.