Interior Secretary Ryan Zinke, second from right, is joined by Utah Gov. Gary Herbert, right, during a press conference Monday, May 8, 2017, at the Butler Wash trailhead within Bears Ears National Monument near Blanding, Utah. Zinke says he wants to make sure Native American cultural standing is preserved in a new national monument but cautioned that not all tribal members share the same opinion about it. (AP Photo/Michelle Price)

BLANDING, Utah (AP) — U.S. Interior Secretary Ryan Zinke said sacred tribal lands he toured Monday in America’s newest and most hotly contested monument should be preserved but he questioned whether the monument designation was the right way to do it.

Zinke’s aerial and ground tour of the Bears Ears National Monument was part of a review ordered by President Donald Trump to determine if 27 monuments were properly established.

Zinke spent the day getting familiar with the 1.3-million acre (5,300 square kilometers) swath of southern Utah with red rock plateaus, cliffs and canyons on land considered sacred to tribes.

His tour guide was Utah Gov. Gary Herbert, one of several prominent Republican leaders in the state who oppose Bears Ears National Monument.

Zinke, a Montana Republican, said he wants to make sure Native American culture is preserved but cautioned that not all tribal members share the same opinion about the monument designated by former President Barack Obama near the end of his term.

He spoke before taking a short, winding hike in the afternoon sun with Herbert and other state and local officials to a lookout post above ancient ruins.

“Of course, the legacy and what I’ve seen should be preserved,” Zinke said, “The issue is whether the monument is the right vehicle.”

Herbert, U.S. Sen. Orrin Hatch and the rest of the all-GOP congressional delegation consider the monument creation by former President Barack Obama an unnecessary layer of federal control that will hurt local economies by closing the area to new energy development. They also say it isn’t the best way to protect the land.

In Blanding, with a population of 3,400 people, two large banners read, “#RescindBearsEars,” reflecting the popular sentiment among residents.

Bears Ears supporters made their voices heard too. They believe the monument adds vital protections to tribal lands where members perform ceremonies, collect herbs and wood for medicinal and spiritual purposes, and do healing rituals.

Tara Benally, a member of Navajo Nation, was standing just outside the Blanding airport wearing a shirt commemorating the December declaration of Bears Ears National Monument.

“We want it left as is. We have history going through there,” said Benally, who lives south of the nearby town of Bluff. “That was basically my mom’s playground as she was growing up.”

A group of Bears Ears supporters greeted Zinke when he arrived to the trailhead. One woman asked why he only met with tribal leaders for an hour.

Zinke, who was shaking another supporter’s hand, turned around to face the woman and said: “Be nice.” The woman responded that she always is.

The monument review is rooted in the belief of Trump and other critics that a law signed by President Theodore Roosevelt allowing presidents to declare monuments has been improperly used to protect wide expanses of lands instead of places with particular historical or archaeological value.

Conservation groups contend that the monument review puts in limbo protections on areas across the country that are home to ancient cliff dwellings, towering Sequoias, deep canyons and ocean habitats where seals, whales and sea turtles roam.

After his arrival Sunday in Salt Lake City, Zinke was met by about 500 protesters who chanted, “Save our monuments, stand with Bears Ears.”

He held a closed-door meeting with a coalition of tribal leaders who pushed for the monument then spoke of his admiration for Roosevelt.

Davis Filfred of the Navajo Nation said Monday that the one-hour meeting Sunday wasn’t enough time for the Bears Ears Inter-Tribal Coalition to make their points to Zinke. Filfred, who was in the meeting, said it seems Zinke is listening more to opponents of the monument than people who want it preserved.

Zinke insisted there is no predetermined outcome of his review, saying he may not recommend the monuments be made smaller or rescinded, and he might even recommend an addition.

The two monuments he’s reviewing in Utah are quite large. Created in 1996, Grand Staircase-Escalante is 1.9 million acres (7,700 square kilometers), about the size of Delaware. Bears Ears is smaller at 1.3 million acres.

Zinke has been tasked with making a recommendation on the Bears Ears monument by June 10, about 2½ months before a final report about all the monuments.

Environmental groups have vowed to file lawsuits if Trump attempts to rescind monuments — a move that would be unprecedented.

On the way back from his hike to the ruins, Zinke stopped at the trailhead and spoke with several people on horseback and admired their horses. On Tuesday, Zinke plans to tour more of the Bears Ears area on horseback.

He said his upcoming decision is not just about how the local tribes, county officials or the governor feel about the monument, but it’s also about how the entire country feels about it because it’s America’s public land.

“President Trump, I’m going to tell you, is a great boss. The reason why I think he felt so strongly about this is he feels like sometimes Washington makes these rules and we don’t have a voice,” Zinke said. “He put this in motion to make sure that local communities count. States count. America counts.” 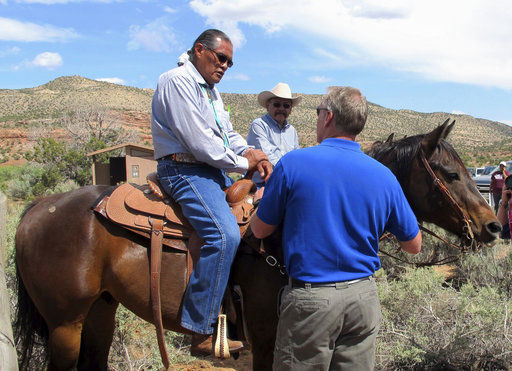 Interior Secretary Ryan Zinke, right, talks with two men on horses Monday, May 8, 2017, at the Butler Wash trailhead within Bears Ears National Monument near Blanding, Utah. Zinke says he wants to make sure Native American cultural standing is preserved in a new national monument but cautioned that not all tribal members share the same opinion about it. (AP Photo/Michelle Price) 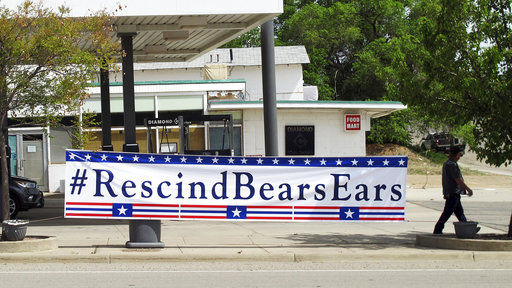 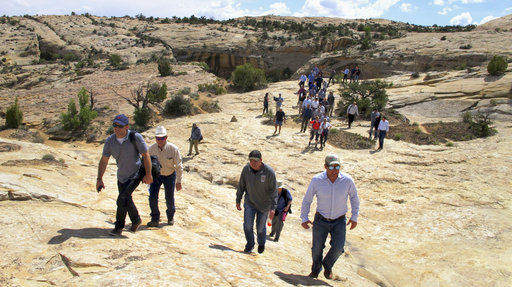 Utah state legislators and their staff lead the way for Interior Secretary Ryan Zinke, Utah Gov. Gary Herbert and others in the distance Monday, May 8, 2017, through Bears Ears National Monument near Blanding, Utah. Zinke says he wants to make sure Native American cultural standing is preserved in a new national monument but cautioned that not all tribal members share the same opinion about it. (AP Photo/Michelle Price) 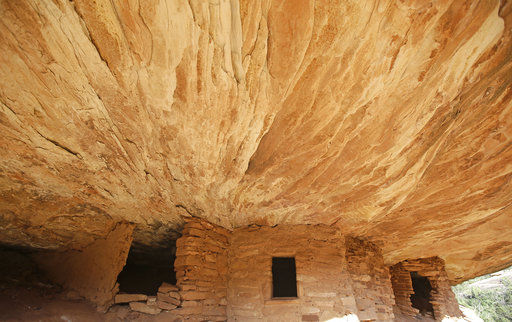 FILE - This June 22, 2016, file photo, shows the "House on Fire" ruins in Mule Canyon, near Blanding, Utah. The Interior Department has released a list of 27 national monuments it is reviewing under a presidential order, including Bears Ears and Grand Staircase-Escalante in Utah and Katahdin Woods and Waters in Maine. A list released Friday includes 22 monuments on federal land in 11 states and five marine monuments in the Atlantic and Pacific Oceans. The review includes a huge reserve in Hawaii established in 2006 and expanded by President Barack Obama. (AP Photo/Rick Bowmer, File )