Dr. Jed Hancock, Space Dynamics Laboratory director of Civil Space, welcomes students to a live downlink from the International Space Station on May 19, 2017 in North Logan.

NORTH LOGAN — “Station, this is Houston. Are you ready for the event?” The event, held Friday, May 19, 2017, was a live downlink from the <a href=”https://www.nasa.gov/mission_pages/station/main/index.html”>International Space Station (ISS)</a>, and the crowd was more than ready to meet the astronauts. Gathered from schools from throughout the state, more than 200 Utah students filled the Robert F. Bennett Research Laboratory at the <a href=”http://www.spacedynamics.org/”>Space Dynamics Laboratory (SDL)</a> in North Logan, with thousands more watching the broadcast from their classrooms.

The 20-minute call to the ISS was initiated by former NASA astronaut <a href=”https://www.jsc.nasa.gov/Bios/htmlbios/precourt.html”>Charlie Precourt</a>, vice president and general manager of Propulsion Systems for Orbital ATK’s Flight Systems Group. A veteran of four space flights with more than 932 hours in space, Precourt was in his element.

“Well, are you all ready for some fun?” Precourt asked the audience. “The last time I did one of these, I was on the other side of it in space, so I’m going to be a little bit jealous, but I’m really, really thrilled to be able to be here to join you for this.”

George Joeckel is one of 25 students from InTech Collegiate High School who heard the live feed from space.

“I thought it was so inspiring,” Joeckel said.  “Just how awesome space is, and it was just amazing.”

Like Joeckel, all the students invited to participate in Friday’s conversation with Whitson and Fischer are involved in science, technology, engineering and math (STEM) education in affiliation with USU’s <a href=”http://utahstars.usu.edu/about”>Gaining Early Awareness and Readiness for Undergraduate Programs (GEAR UP)</a> program.

“This is a signal opportunity [for students] to be engaged with NASA in a way that’s going to change their lives,” said Eric Packenham, director and principal investigator of the GEAR UP 1 federal grant. “They are going to be the future researchers that help us explore Mars and other planets and inhabitants and those kind of things, and we’re so proud of them. We’re thankful for Senator Hatch, for Space Dynamics Lab, for NASA to give us this opportunity.”

Opportunity was a buzzword throughout the ISS downlink, with Hatch, Whitson and Fischer emphasizing the importance of STEM education.

“It doesn’t matter where you come from,” Hatch said, in a prerecorded message to the students. “Connect what you’re doing in school with the future potential of your career.”

“You are the generation that’s going to take us into the heavens for good,” said Fischer.

Orbiting approximately 250 miles above the earth at more than 17,000 mph, Whitson and Fischer made students laugh as they answered questions about their favorite foods in space, the “weird stuff” they’ve seen and how their free time is spent. The astronauts also made the students think, discussing more than 300 experiments currently being conducted within the ISS, the effect of micro-gravity on the body and how emergencies are addressed on the space station.  When Benjamin Huenemann, a sophomore at <a href=”http://www.intechchs.org/”>InTech Collegiate High School</a> asked the NASA pair whether musical instruments are played aboard the space station, <a href=”http://thomaspesquet.esa.int/”>French astronaut Thomas Pesquet</a> just happened to float by…playing a saxophone.

The question that perhaps best captured the purpose of the event came from Jason Shepherd, a junior at Wendover High School.

“If you could give a 17-year-old one piece of advice, what would that be?” he asked.

“I dare you to dream,” he said. “That has two important parts. First off, the dream part. Only you can find the thing that lights a fire in your soul. You have to define that for yourself. And then the second part of ‘I dare you to dream’ is that no one is going to give that to you. Not everyone gets a trophy in life. If you don’t work really hard at your passion, it will never happen.  I can guarantee it. You need to find your passion, and you need to follow it with all you’ve got.”

“This was one of the best things I’ve seen,” said Eric Warren, SDL’s director of public relations.  “To watch the kids get engaged live with an astronaut—that’s amazing.”

“Forgive the pun, but it’s astronomically amazing for them to be here,” he said. “Honestly, our students are exceptional and they put forth a lot of effort to make a difference. For them to have this opportunity to make some contacts in the aeronautical world and speak to people on the International Space Station… I’m so proud of them for having the courage to take the steps necessary to be involved.”

Chaperoning 45 students at the event, Mount Logan School Principal Daryl Guymon said he wished all 1,250 of his students could have attended.

“This is what we’re preparing our kids for,” he said. “There’s a lot of jobs out there right now that are available in STEM. What a great opportunity today to let these kids see what it is hands-on and learn how their education all connects together.”

“It’s really incredible what happens in space,” Jed Hancock, SDL’s division director of Civil Space, told the students as their experience with Whitson and Fischer concluded, “and your future is truly out of this world.” 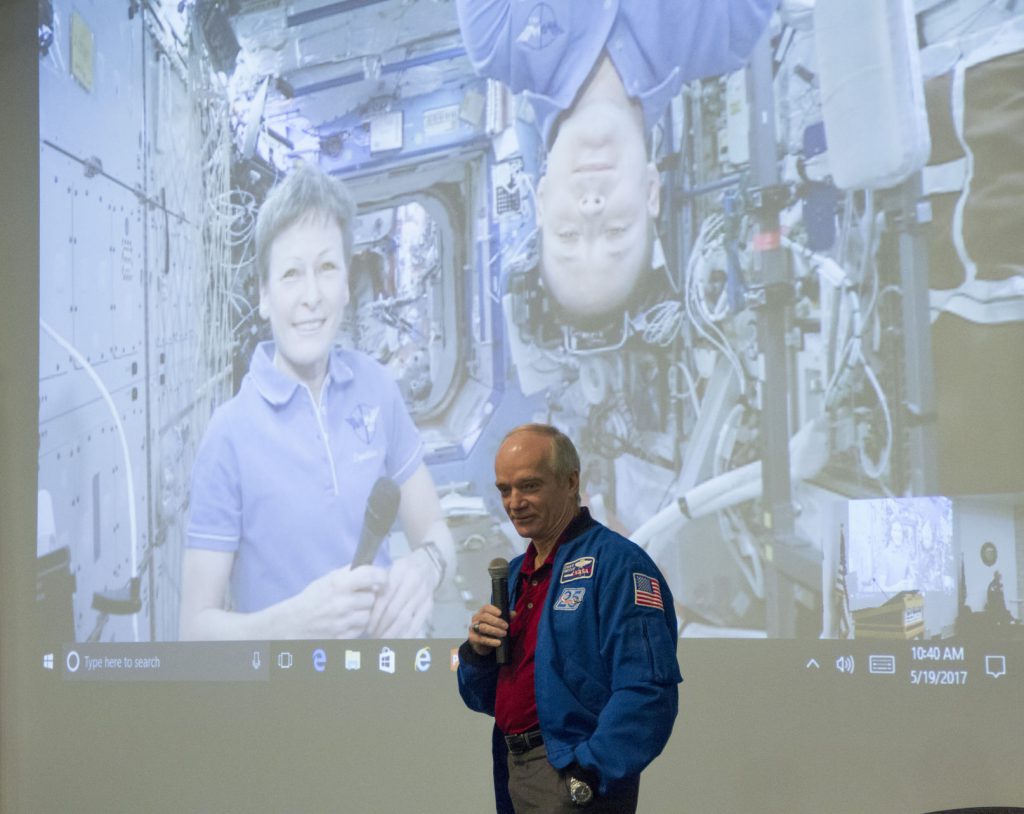 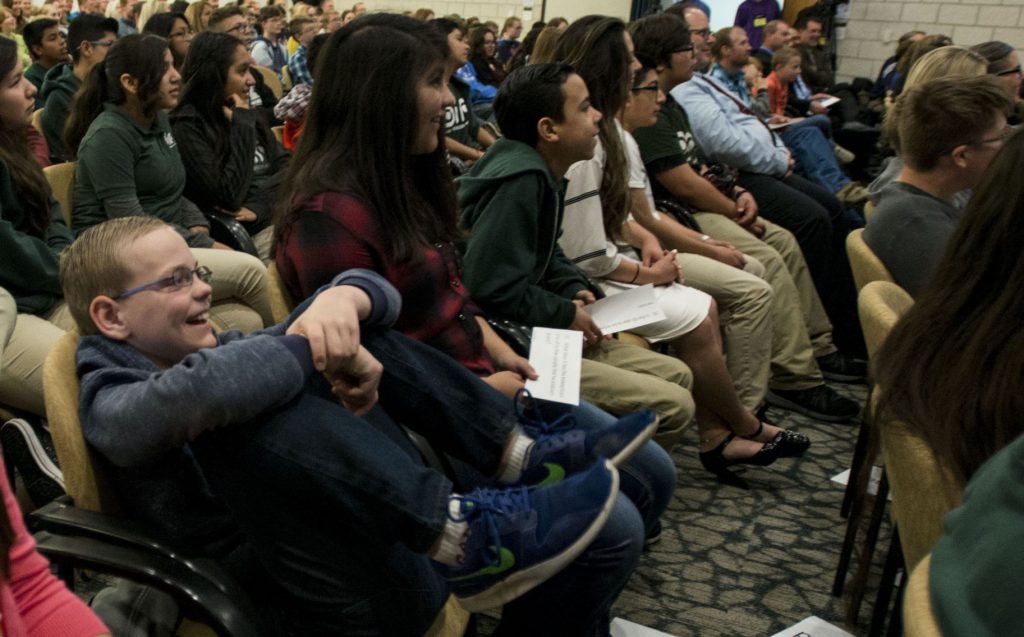 More than 200 Utah students gathered at the Space Dynamics Laboratory in North Logan on May 19, 2017 to participate in a live feed from space. The students are involved in science, technology, engineering and math (STEM) education. 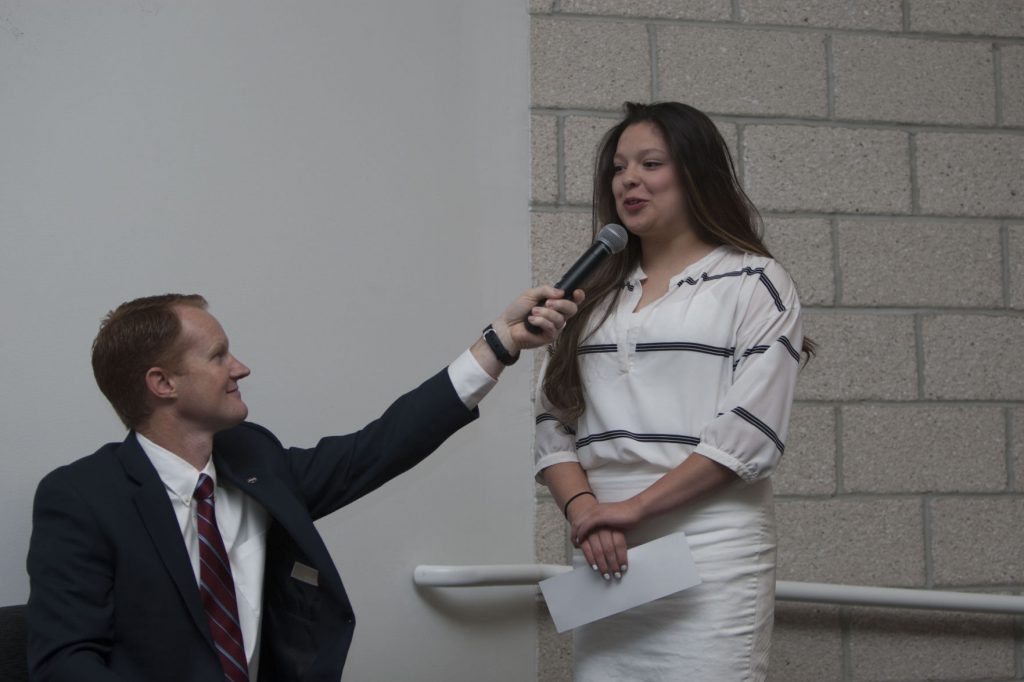 Intech Collegiate High School senior Zayhetzi Nunez asks astronauts Peggy Whitson and Jack Fischer, "What weird stuff have you seen in space?" during a live feed from the International Space Station on May 19, 2017. 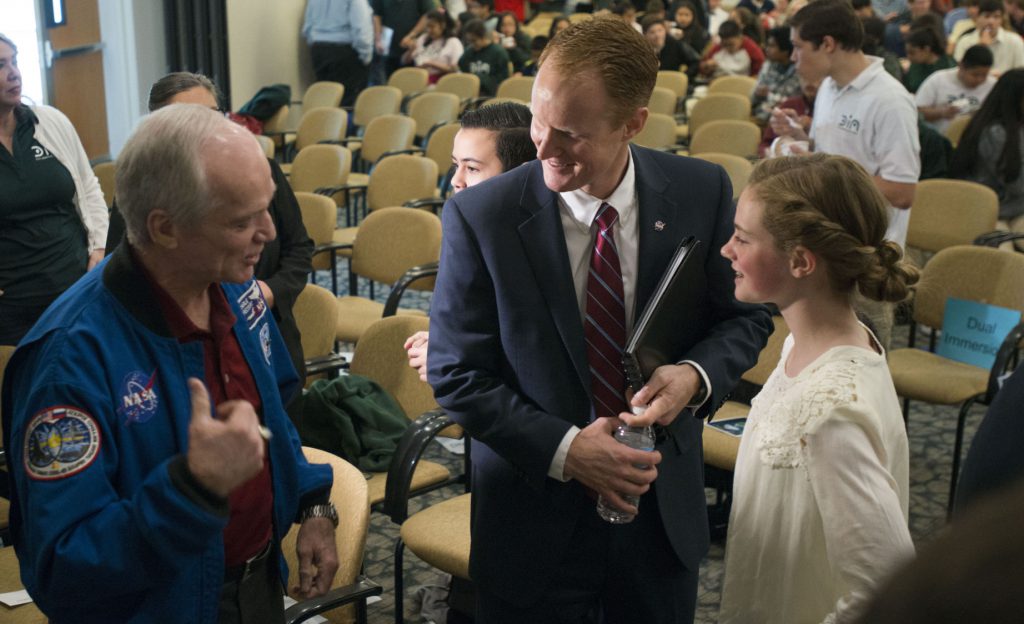 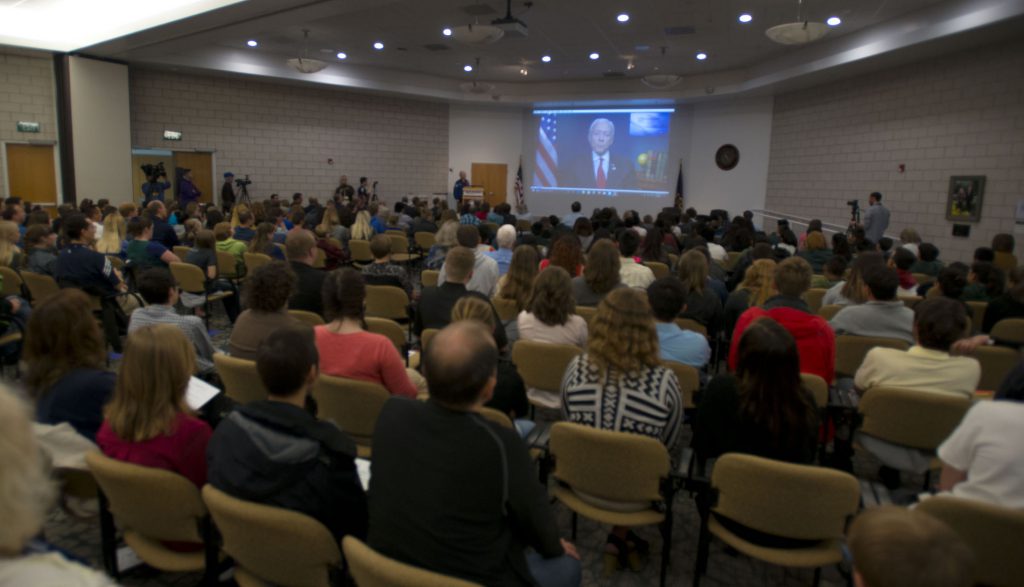 U.S. Senator Orrin Hatch presents a prerecorded message to students attending a live downlink from the International Space Station on May 19, 2017.