Brandon Despain has a really cool job title. An employee, off and on, for Caffe Ibis for the past 12 years, Despain has spent the last three years as Ibis’s “Director of Coffee”. That sounds as much fun as being the “General Manager of Party”, or the “Vice President of the Keg.”

Recently I interviewed Despain about a “fair trade” agreement Ibis has recently entered. It was a fascinating conversation that, hopefully, will conclude with a prosperous ending for all those involved in the story.

Caffe Ibis was founded in 1976 by Sally Sears and her late husband, Randy Wirth. With its current main location at the intersection of Church Street and Federal Avenue in downtown Logan, Utah, Ibis has earned a reputation for top-quality coffee, community involvement and for being pioneers in the promotion of organic coffee and in the concept of Fair Trade.

“Ibis was the first to get on the organic and Fair Trade train,” Despain boasted.

What is Fair Trade? As a proper noun, Fair Trade can be described as a social economic movement where importers of goods give back some of their profits to the farmers and workers who produce the desired commodities. These reallocated funds are used to improve the working conditions, the environment and the overall quality of life for those workers.

Essentially, it’s capitalism with a conscience.

Why would such a theory be necessary…especially in the world of coffee? Allow me to give a brief explanation. I will try to provide more clarity than Dan Aykroyd gave revealing his scheme that he and Eddie Murphy utilized to crush the Dukes in the film “Trading Places”.

Like most commodities, coffee is traded on the New York Stock Exchange. Wall Street sets the price of coffee. If it is a particularly bad year in trade, many farmers in the rural areas of the world where the coffee is cultivated make considerably less money. In bad years, the farmers pretty much have to sustain themselves by eating dirt. Wall Street does not care about mitigating factors such as working conditions, corrupted government officials, bad weather or disease. They set a price for the world entire and it is the primary guiding principle for how much money is made on coffee.

“I don’t want to base my sales on Wall Street. Bad for us and bad for the farmers,” Despain told me. “The market can be manipulated.”

This was the precipice Caffe Ibis stood upon when they decided to ensure they made Fair Trade deals which would be their brand. Despain received quite an education regarding the many facets of Fair Trade when he started making cooperative agreements.

“I was convinced Fair Trade was all about price. It’s not. It’s more about empowerment,” Despain admitted. “Everyone has to have a vote and a voice.”

But how would Caffe Ibis, or any company, know they were in a good cooperative (co-ops) Fair Trade agreement? That is where an organization named Fair Trade USA comes into our conversation.

Fair Trade USA strives to ensure American businesses and the international farmers they enter co-ops with all profit. From the farmer’s end, Fair Trade USA guarantees that they received equitable compensation for their product. FTUSA promotes safe working conditions, a livable wage and the right for workers to organize. FTUSA should come to Utah and help retail workers get a better deal.

FTUSA’s certifications are transparent and considered canonical. They are both a watchdog for the importers, exporters and workers and an arbiter of disputes. This is not an easy job to hold. Corruption is rife in many coffee-producing countries. The chain of money from buyers to farmers can be funneled on to corruptible avenues. Governments can come under the influence of despots not so willing to allow for trade agreements to continue as are.

It takes much work to ensure everyone in the agreement gets what they are promised.

And it is here that my interest was piqued. Brandon Despain told me many months back that Caffe Ibis was about to enter an agreement with a group of women farmers. When I recently sat down with him to discuss this arrangement, I found this story to be much more enthralling than I originally thought it could be.

The region of Takengon, Indonesia is governed under Sharia Law. Blunty stated, Sharia law is a system of Islamic theocracy. Although Sharia law differs depending on the country or region imposing it, for the most part, women are treated as second-class citizens in all its applications.

For the women of this region to be able to run their own coffee business, and profit from it, they had to set up a puppet company under their husband’s names. “The husbands needed some convincing,” Despain told me.

Once the husbands agreed, the women formed their own coffee-growing company and now they do business with Caffe Ibis, nearly half a world away.

And how does Fair Trade help these women? Under the co-op agreement, the money Caffe Ibis kicks back must go to improvements of some sort for the workers and farmers.

These Indonesian women have taken their extra profits to start a daycare for their children. They are planning to build a school. I think we can all agree it is a good thing if children are being properly cared for and educated instead of being tethered to their mothers out in the fields.

They are also looking to build a form of greenhouse that can dehumidify their crops. This will create a better product which can be sold at a better price which will help better their quality of life even more. This is what Fair Trade does.

Caffe Ibis and Brandon Despain get it. It is possible to make money and be proactive in making the world a better place for farmers and workers. Good deeds have been the legacy of Caffe Ibis since its founding. It is why Ibis is one of the crown jewels of Cache Valley.

And all any “conscious consumer” need do to be a part of this is to go to Ibis, or any business that partakes in Fair Trade, and buy something. Your patronage helps makes Fair Trade agreements profitable, which helps improves the lives of people in parts of the planet that desperately need a higher quality of living.

When I asked Brandon what the purpose of his work was, he replied, “It’s about being decent human beings.”

All of us can feel that way. All it takes is for us to buy a bag of coffee. Isn’t that wonderful? 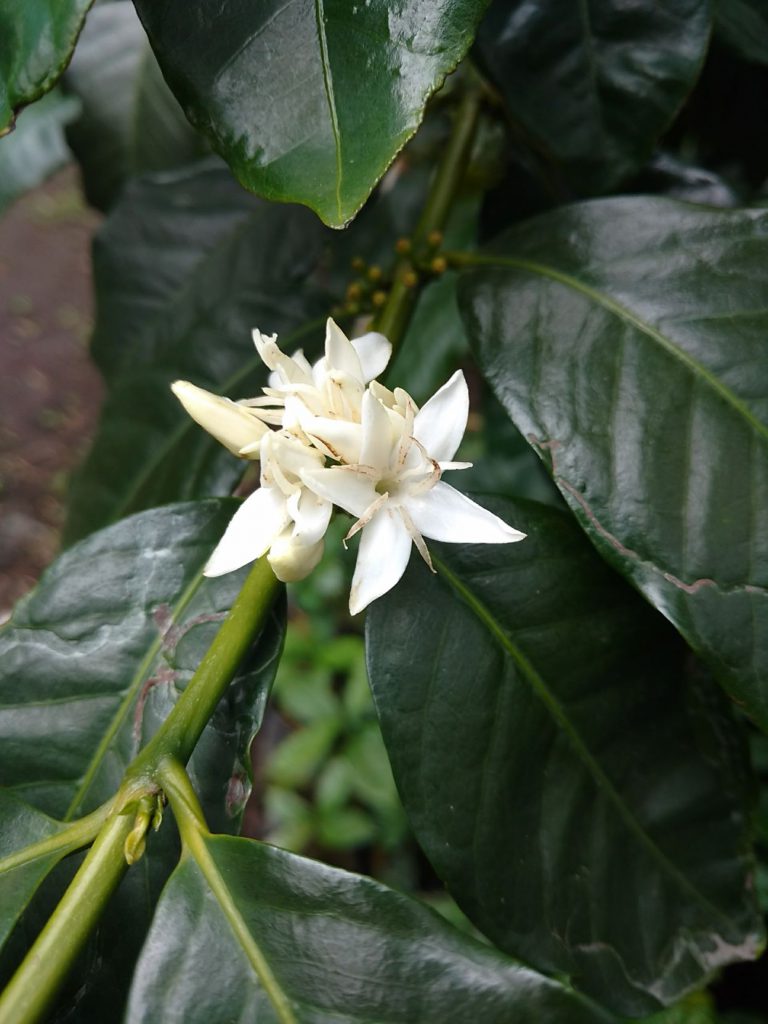 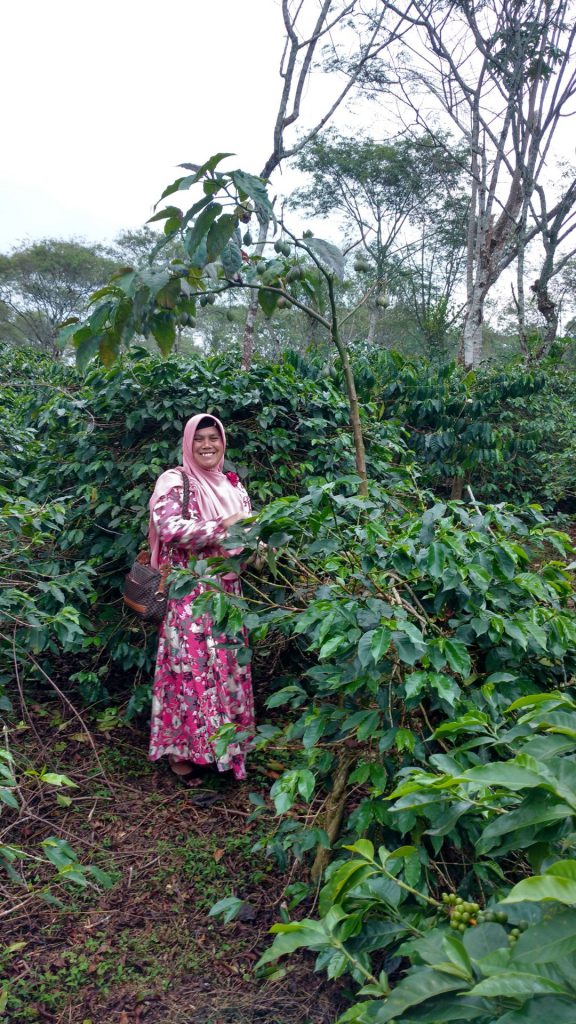 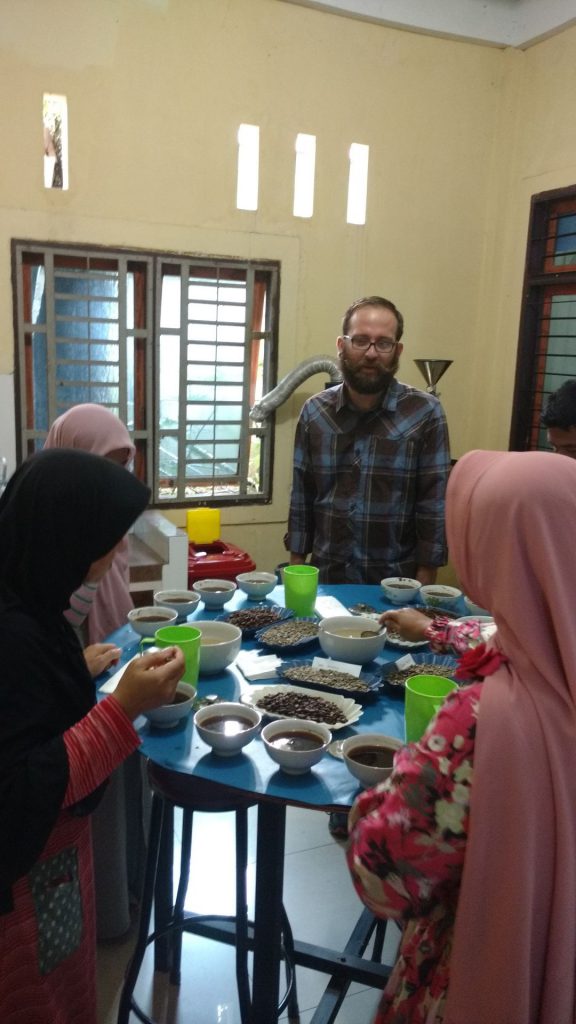 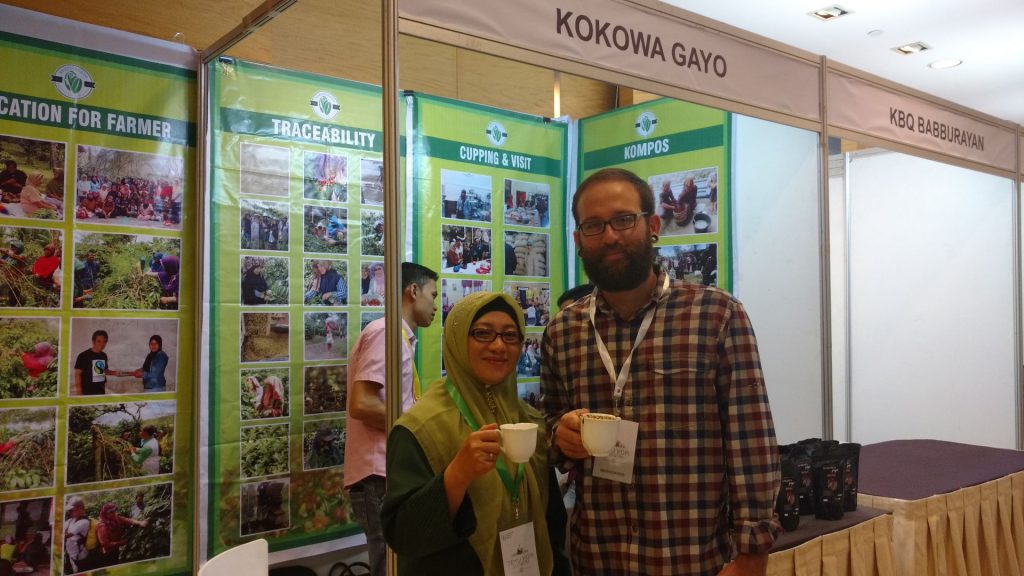 Brandon Despain meets with the women in the region of Takengon, Indonesia to set up a Fair Trade agreement between them and Caffe Ibis.