Top: The artwork of 2017 Art in Transit contest winner Carter Ostermiller, a Ridgeline High School student, wrapped on a CVTD bus. Bottom: The artwork of 2016 runner-up Ivy Rich, a Mountain Crest High School graduate, on a CVTD paratransit bus. The buses will be unveiled and parked for public viewing June 15-17, 2017 during the Summerfest Arts Faire.

CACHE COUNTY — In partnership with the <a href=”https://www.cvtdbus.org/”>Cache Valley Transit District</a> (CVTD) and the <a href=”http://www.brhd.org/”>Bear River Health Department</a> (BRHD), the <a href=”https://www.ccsdut.org/”>Cache County School District</a> (CCSD) will unveil three projects during the <a href=”http://www.logansummerfest.com/”>Summerfest Arts Faire</a> this weekend in celebration of the 6<sup>th</sup> annual <a href=”http://www.cachecountyarts.com/art-in-transit.html”>Art in Transit: From Schools to Community Project</a>. The projects, showcased on two CVTD buses, will be on display for public viewing from 11 a.m. to 5 p.m. on June 15-16, and from 10 a.m. to 5 p.m. on June 17. One bus will be parked at the southeast corner of the Logan Tabernacle parking lot (50 N. Main), with the other bus being parked at the corner of Center Street and 100 East.

Aurora Hughes Villa, district arts coordinator with the CCSD, said the goal of the Art in Transit project is to display art created by children in public places, showcasing their work both inside and outside of CVTD buses.  Featured during Summerfest will be a large CVTD bus wrapped with the work of Ridgeline High School student Carter Ostermiller and a smaller paratransit bus wrapped with a design by Ivy Rich, who graduated from Mountain Crest High School last year.

Villa said the theme of the Art in Transit contest is “Share the Air.” She said students are tasked with creating imagery that connects with the theme, and her office received more than 100 entries this year.  She said the judging committee—comprised of CVTD members, the director of Summerfest and a local artist—was so excited about Ostermiller’s artwork that they decided to reproduce his original design to sell at Summerfest. Proceeds will benefit the Art in Transit Project.

“It’s kind of this fun, kind of scientific, artistic approach to the whole theme of ‘Share the Air,’” Villa said.  “His design’s a little different from the past years, and it’s a little more conceptual. It’s just a real eye catcher, so I’m excited about kind of hearing what the response is.”

After they view the outer wrap of the larger bus, Villa invites visitors to Summerfest to “hop on and look inside.” The inside of the bus is decorated with artwork by the top 10 student artists who entered this year’s contest, along with pictures painted by third graders at Lincoln Elementary School.

“It’s just beautiful,” said Villa. “They’re self-portraits of the students that they created with watercolors and landscapes and different buildings and houses. The project is called ‘My Community in Me,’ and I’m excited for the Summerfest participants to come and see that as well.”

“Come and see this triple unveiling at Summerfest,” she said. “I’m just really excited to have that variety for people to see.” 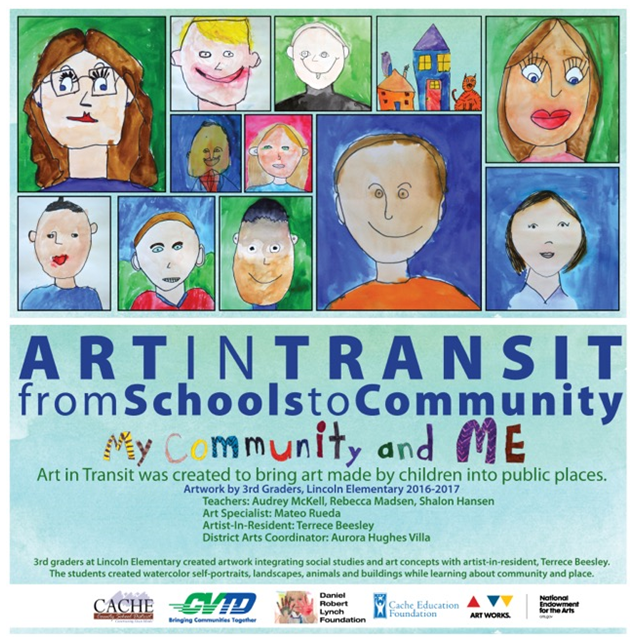 Artwork by 3rd graders at Lincoln Elementary School will be on display for public viewing June 15-17, 2017 during the Summerfest Arts Faire. The self-portraits have been reproduced on placards placed inside a CVTD bus.