LOGAN – When the dust from the 2017 NFL Draft had settled, eight different Aggies had new NFL teams. It’s been less than two months since draft day, but after competitions, tryouts and minicamps, only half of those eight are now on one of the NFL’s 90-man rosters.

Mays, Ali’ifua, Houston and Gray may be safe for now, but there is still a lot to prove before the season starts in September. The 90-man rosters will be trimmed to just 53.

Below are quotes of what each team’s local media is saying about the NFL hopefuls.

Devante Mays was Utah State’s only player picked up in this year’s NFL draft. After an injury-filled senior season the Packers took a chance on him in the seventh round. He is now in the middle of a running back battle with Ty Montgomery, 2017 UTEP draftee Aaron Jones and BYU’s Jamaal Williams.

<h5>Gary Davenport, Bleacher Report:</h5><p style=”text-align: left;”><em>“Mays was limited to just 259 yards on the ground in six games last year at Utah State, but the year before he posted nearly 1,000 yards and averaged almost six yards a pop.</em>

<p style=”text-align: left;”><em>Mays is hardly the favorite in a wide-open backfield competition, but he’s a kid to watch in camp.”</em>

<em>“Mays will get his opportunity to show the Packers what he can do because the position is so young. In fact, Montgomery is the oldest running back on the roster and he’s 24 years old.</em>

<em>Having Mays part of the running back mix is going to make Packers training camp really interesting. All four running backs bring something different to the table and the coaching staff with have a tough choice on their hands when cuts are made at the end of preseason.”</em>

<em>“Mays likely enters the NFL as one of the game’s strongest running backs. A powerlifter growing up, Mays is now 230 pounds of rock solid muscle.</em>

<em>His tree trunk-like legs have been built over years in the weight room. They helped him perform a 40.5″ vertical leap and 10-9 broad jump, both impressive numbers for a 230-pound athlete.”</em>

<em>“To me, Mays has the highest upside of the three backs. Mays is built like a truck and possesses a 40.5-inch vertical leap. He’s more athletic than Williams and much more powerful than Jones. If Mays had made more than 37 carries this season (injury-riddled season), he might have gone ahead of both of his new teammates.”</em>

After compiling 99 tackles – 18 of them for a loss – during his time at USU, Ricky Ali’ifua joined the Chiefs as an undrafted free agent. According to the Kansas City Star, he was one of the first to sign a contract after the team’s rookie minicamp.

<em>“Ali’ifua was one of nearly 70 players to try out for the Chiefs at the team’s rookie minicamp, and he was impressive enough to earn a contract out of it, one of a handful of players to ink a roster spot out of the dozens of options.”</em>

Houston ranks second in career receptions, receving yards and touchdowns among USU tight ends. He signed with the Kansas City Chiefs as an undrafted free agent, but was soon waived. He joined the Panthers in late May, but seems to have a lot of competition in his position group in Charlotte.

After participating in the Cardinals rookie camp as a tryout, Gray was called back and signed with the team on the first day of minicamp along with wide receiver Chris Hubert and defensive tackle Alex Bazzie.

<em>“None of these guys will be more than camp bodies. Hubert has a lot of ground to cover, and with a deep receiver room, his chances to make the practice squad again this season is slim. Gray enters a weak secondary, but there is not much to form an opinion on him, because of his lack of statistics.”</em> 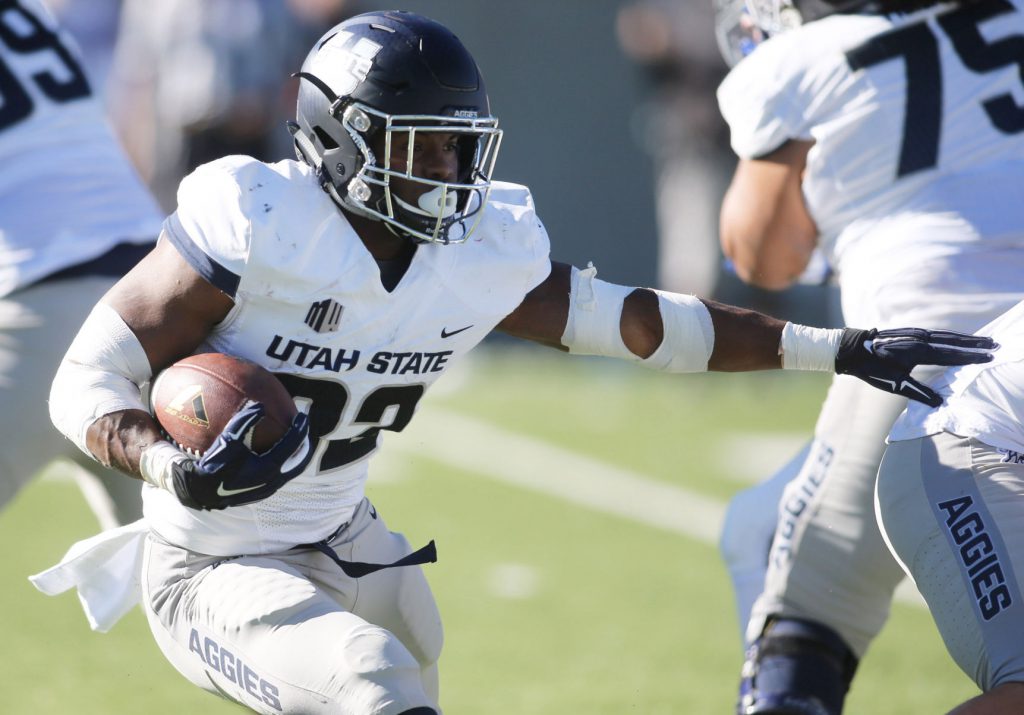 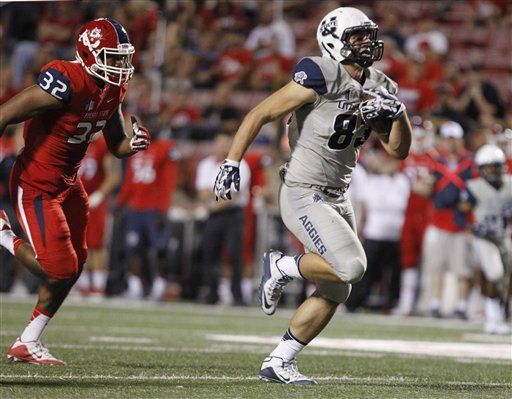 Utah State's Wyatt Houston runs down field to set up a touchdown past Fresno State's Devante Mays during the first half of an NCAA college football game in Fresno, Calif., Saturday, Oct. 10, 2015. (AP Photo/Gary Kazanjian)