LOGAN— It’s been several years since the <a href=”http://www.cachevalleycruisein.net/index.php?cID=1″>Cache Valley Cruise-In</a> last hosted a concert in conjunction with its annual car show. More than a dozen bands have performed in years past, and the tradition returns on Friday, June 30, with the legendary rock band <a href=”https://www.nightranger.com/#/”>Night Ranger</a>.  The concert begins at 8 p.m. at the <a href=”https://www.cachecounty.org/fairgrounds/”>Cache County Fairgrounds</a>.

With 2017 marking the 35<sup>th</sup> anniversaries of both the band and the Cruise-In, concert organizer Brandon Douglas said it made “perfect sense” to celebrate together.

“When it came to picking a band, I wanted to pick someone who put on a good, clean show, one you can bring your children to and not worry about what they’re going to see or hear,” he said. “I wanted to bring one that has some good music, and Night Ranger just kind of fit that mold.”

Douglas said it’s been a few years since Night Ranger played in Utah, and he said the band is excited to return.

“They said they love it out here because they have good fans,” Douglas said. “I’m really hoping to make some more memories for those who know Night Ranger’s music, and I’m hoping to make a couple thousand new fans of Night Ranger as well.”

Jack Blades, Night Ranger’s lead singer, said the band is “totally pumped” for its return to Utah. During a recent <a href=”http://www.klzxfm.com/wp-content/uploads/2017/06/Jack-Blades-Interview-Fianl-sterio.mp3″>interview</a> with CacheValleyDaily.com’s affiliate classic rock station, <a href=”http://www.klzxfm.com/”>KLZX 95.9</a>, Blades said shows in Utah are always great and “the audience is always wild.”

“Everybody sings along,” Blades said. “We never know what we’re going to play, we always play different songs, we throw in different things into the set…The Utahns always roll with the punches on that respect, and we always have a blast.”

Night Ranger’s 35<sup>th</sup> Anniversary Tour includes performances around the world and celebrates the release of the band’s new album, <a href=”https://itunes.apple.com/us/album/dont-let-up/id1192414278″>“Don’t Let Up”</a>.

One of Blade’s longtime fans, Douglas makes it no secret that Night Ranger is his favorite band. The San Francisco-based rockers have sold more than 17 million albums and performed over 3,000 live shows since they started playing together in 1982, and their radio audience exceeds 1 billion listeners.  With legendary hits like “Sister Christian”, “Don’t Tell Me You Love Me” and “(You Can Still) Rock in America”, Night Ranger has influenced pop culture in media, television, video games and even on Broadway.

Douglas said he likes so much of Night Ranger’s music that it’s hard to pick a favorite song, but “When You Close Your Eyes” tops his list. As he’s been coordinating the Cruise-In concert, his excitement has grown, and he promises ticketholders “best concert they’ll go to all summer.”

“I’ve been a kid at Christmas for the last four months waiting for them to come, and today’s Christmas Eve,” he said. “Tomorrow will be Christmas.”

While concert floor seats have sold out, $25 tickets are still available and can be purchased <a href=”http://www.cachevalleycruisein.net/index.php/concert-information/”>online</a> or at any Lee’s Marketplace.

“If you’re a procrastinator and you just don’t get to it,” Douglas said, “and all of a sudden you realize, ‘Oh, it’s Friday night at 6 o’clock…I want to go to that,’ just come down and we’ll have tickets for sale down here onsite outside our gates.”

Douglas said parking for the concert is available in the large lot just south of the rodeo arena.

“They can come into those gates there, park in that grassy parking lot, come to the gate just north of it, buy their ticket…and within 100 feet,” Douglas said, “they’re inside the rodeo arena where the concert’s at. They can pick out their seat and be ready to head bang.” 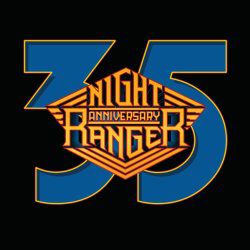 Night Ranger returns to Utah June 30, 2017 for the Cache Valley Cruise-In concert. The concert begins at 8 p.m. at the Cache County Fairgrounds.