Robert Turbin coaches a young quarterback at his camp in the Stan Laub Indoor Training Center at Utah State University on Saturday, July 1, 2017.

The ball is snapped and players on offense and defense start moving all over within the red zone of the Stan Laub Indoor Training Center. Suddenly, a wide receiver breaks free on a crossing route and the young quarterback delivers the ball on target. The wide receiver makes a quick move to lose his defender, cuts down the sideline, and tip toes into the end zone before any defenders can remove a flag from his waist. Indianapolis Colts running back Robert Turbin celebrates on the sidelines and gives one high five after another.

The play was one of many that took place at Utah State University on Saturday as part of Robert Turbin’s annual football camp. It was the third camp he has conducted on the USU campus since he turned pro.

The former Aggie running back saw some potential in his campers, perhaps even some future Aggies.

“I just love to see the competitive nature out of the kids,” Turbin said after the camp concluded Saturday afternoon. “They get to compete against each other, it’s good to see them care and want to get better as athletes. That’s the most encouraging part about it.”

He said the theme of the camp was to dream big. And it was a constant message throughout the camp.

“The message is real simple: any goal that you have in mind, anything you want to do in life, believe in yourself. Know that you can accomplish anything,” he said. “There is no goal too high to attain. Anything is possible, anything is achievable. That’s what I want to encourage in the kids when they’re here.”

Returning to Logan is special for Turbin. He had a successful career playing in Romney Stadium, but a few things have changed since he last wore an Aggie uniform.

Setting a foundation for future success is what Turbin enjoys doing. It’s what he tried to do at his camp in Logan. After every play during the scrimmages, Turbin pulled the quarterback aside and provided personal coaching and encouragement to whomever was running the offense.

After his NFL days come to an end, Turbin sees perhaps a post-NFL career in coaching, but only at the high school level. He feels that’s where he can make the most impact on young lives.

He said college coaches have some similar opportunities, but there are a host of challenges that come with being a college or even professional coach, namely travel and lack of stability with the profession.

Before he sets his sights on being a high school coach just yet, Turbin is still hungry to continue his current NFL career. Turbin is preparing for his second season with the Indianapolis Colts (his sixth overall) and said he’s feeling better than he’s ever felt.

“I’m blessed to still be in it. I continue to work hard and with that the results will come.”

Turbin was recently praised by Pro Football Focus for his <a href=”http://www.colts.com/news/article-1/Robert-Turbin%E2%80%99s-Pass-Blocking-Set-Him-Apart-In-2016/ff679664-f741-4b8e-bdc9-bee7ab97122a” target=”_blank”>effectiveness in pass blocking situations</a>. He also had his most successful season in finding the end zone. Turbin scored 7 rushing touchdowns and one receiving touchdown for the Colts, who recently <a href=”http://www.colts.com/videos/videos/Mini-Camp—Wired-For-Sound-Robert-Turbin——–/4825556e-d0a5-43d6-95a2-3da2513b161d” target=”_blank”>wired him for sound</a> during their mini camp in June. The team concluded their Organized Training Activities just a few weeks ago but will be reporting for fall camp at the end of July.

At the conclusion of his camp Saturday afternoon, Turbin personally handed out various MVP awards to camp participants. That can be seen in the video below. 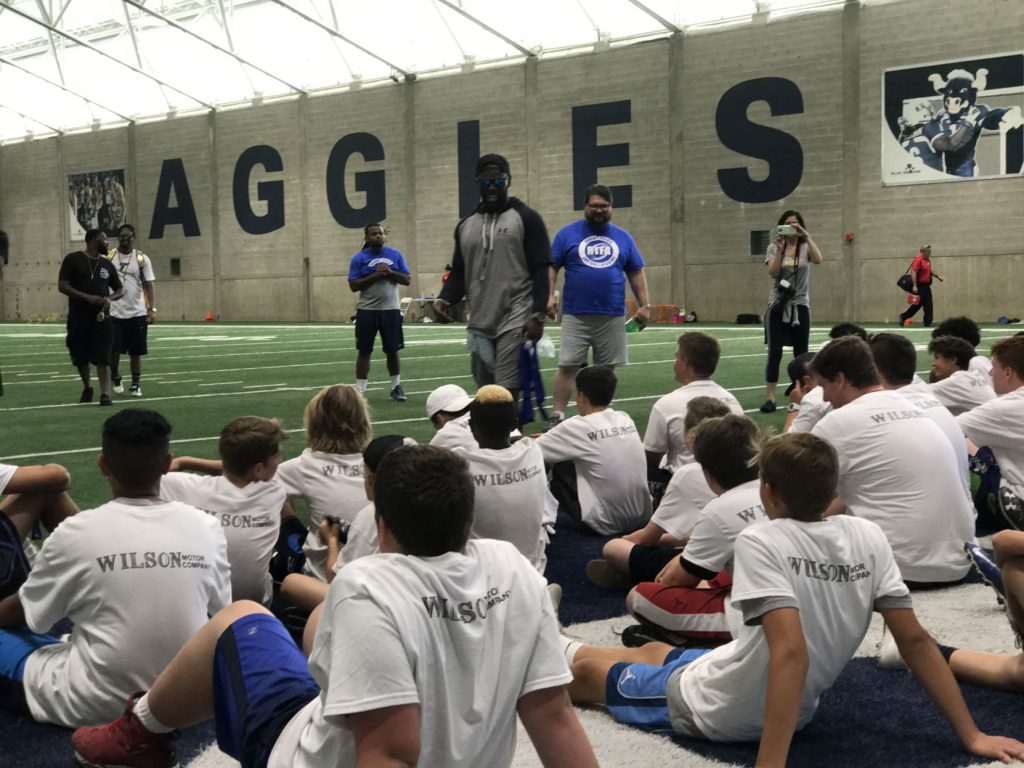 Robert Turbin addresses campers at the conclusion of his football camp at USU on Saturday, July 1, 2017.