HYRUM — Rex Harris was raised in Hyrum and attends the city’s Star Spangled Celebration every year.

“It’s the best little town,” he said. “They have the best parade in the valley, they have free watermelon after the parade and they have a great fireworks show.”

Watching the parade with his young sons, Daniel Bridenstine said Hyrum is an ideal place to celebrate the Fourth of July.

“Patriotism is everywhere here,” he said. “Everybody’s got the flag. Flag shirts are all over the place. We love America, all the freedoms we enjoy here, and this valley’s the perfect place for it. We’ve lived all over the country and ended up right back here.”

Bridenstine said Cache Valley’s patriotic spirit is important because many people in other places are forgetting about it.

“You know, honestly, in the schools, a lot of people aren’t saying the Pledge of Allegiance,” he said. “It’s almost taboo to be a patriot these days, so I think things like this are exactly what America needs. It’s awesome. I love it.”

While Angel Larsen has lived in Hyrum for nine years, 2017 marks her first year attending the Star Spangled Celebration.

“My kids are so excited,” she said. “We had the pancake breakfast supporting the high school, and they loved it. We’ve been here already like 2 ½ hours, and usually they complain after an hour. I love that the community does this because I live like three minutes away, and I love that I don’t have to drive to Logan or Lewiston to do something.”

The pancake breakfast Larsen mentioned is an annual fundraiser for the Mountain Crest High School Marching Band. Wayne Jorgensen, who has coordinated the breakfast for the past four years, said the money raised goes into the band’s general fund to help repair instruments and subsidize the cost of participating in competitions, especially the state championships in St. George that take place in November.

“It’s fun to be able to take care of the community, be a part of the community,” Jorgensen said. “When the Lions Club was disbanded, the marching band actually had an opportunity to serve Hyrum City and we we took the breakfast over. It’s just great to see those that come back for the holiday and how they appreciate being able to come together and gather before the parade and enjoy things.”

Still counting the morning’s numbers—more than 500 plates of pancakes, eggs and ham were sold—Jorgensen said the band raised more than $2,500 in 2016.

“Hopefully we’ll have that much or a little bit more,” he said, “because we had some charitable people that helped donate some of the product this year, which will benefit the band.”

Also raising money for a good cause was 17-year-old Jared Larsen. Pulling a wagon down Main Street, the young entrepreneur had a cart full of homemade “noodle swords” to sell.

“They’re called light sabers,” he said. “I make them in my basement—PVC cement, foam noodles, PVC. It’s to raise money for my (LDS) mission and for college. Originally my cousin made them. We had a pretty good battle at his house, so I decided I wanted to make them on my own. I sold them four years ago to earn a Lego set, and I’m doing it again now.”

Like Harris, Larsen was raised in Hyrum and has attended the Star Spangled Celebration throughout his childhood. He’ll be a senior at Mountain Crest High School this fall.

“I like the small-town feel,” he said. “People are really friendly. Everyone will say, ‘Hi,’ and it’s a nice environment to sell.”

From food and smoothies to home décor and clothing, vendors hosting booths throughout Hyrum’s City Square had many goods to offer guests of the Star Spangled Celebration. There were also bounce houses and games for children. Bob Wiser, with Bob Wiser Fine Art, sold original watercolor paintings and marketed the art lessons he teaches. Wiser said he likes to give people a chance to develop their artistic abilities and fit art into their lives.

“Some people let that go because they think there’s no money in art and they don’t do it, but it’s fulfilling,” he said.  “It can be a social activity, too.”

“We go to Hyrum Dam and we boat there,” he said. “The Fourth of July weekend is my family’s reunion, and we all go there. We’ll go to the fireworks tonight, too. We love the fireworks.”

After viewing the parade, Harris said he was headed to the Hyrum Dam, ready to “go jump in a lake” to beat the sweltering heat—but not before he enjoyed some of the watermelon and visited the vendors.

“It’s a family tradition,” he said. “It’s close to home. It’s right in my front yard. Even a lot of people from the whole valley come here.”

While the booths closed down at 5 p.m., the Star Spangled Celebration isn’t over. The Hyrum Hornets play at East Park at 7:30 p.m., and Hyrum City’s evening entertainment will begin at 8 p.m. at the city soccer fields. The 2017 Star Spangled Celebration will end in Elite Hall at midnight, at the conclusion of a youth dance that begins at 10:30 p.m., right after the fireworks. 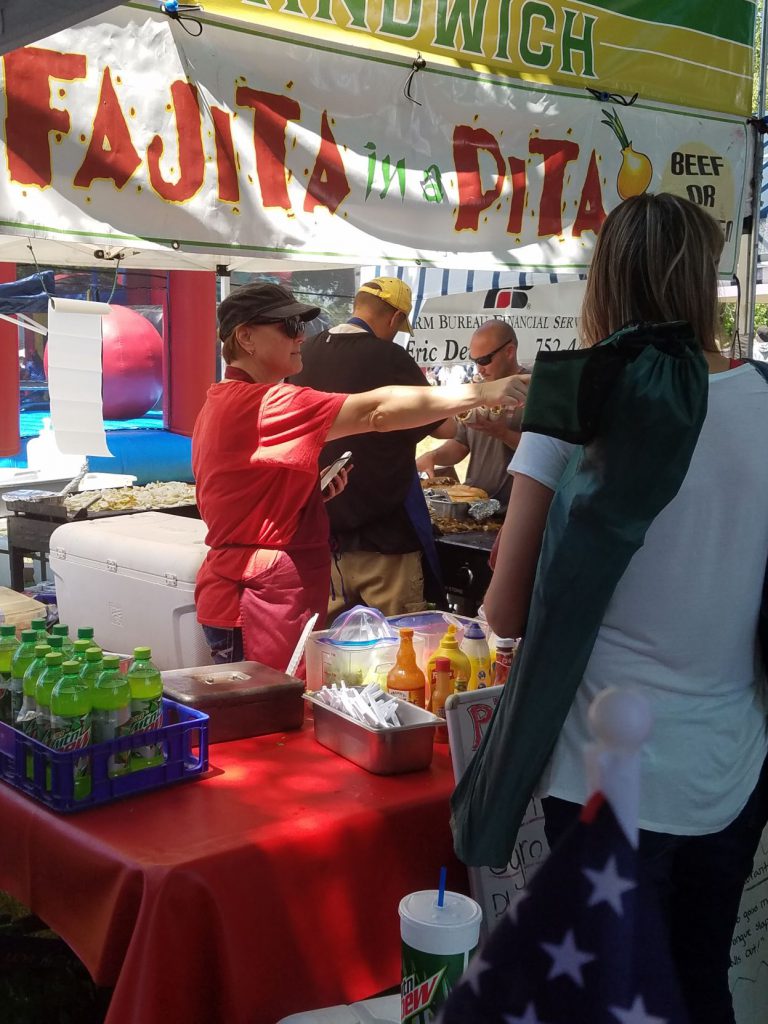 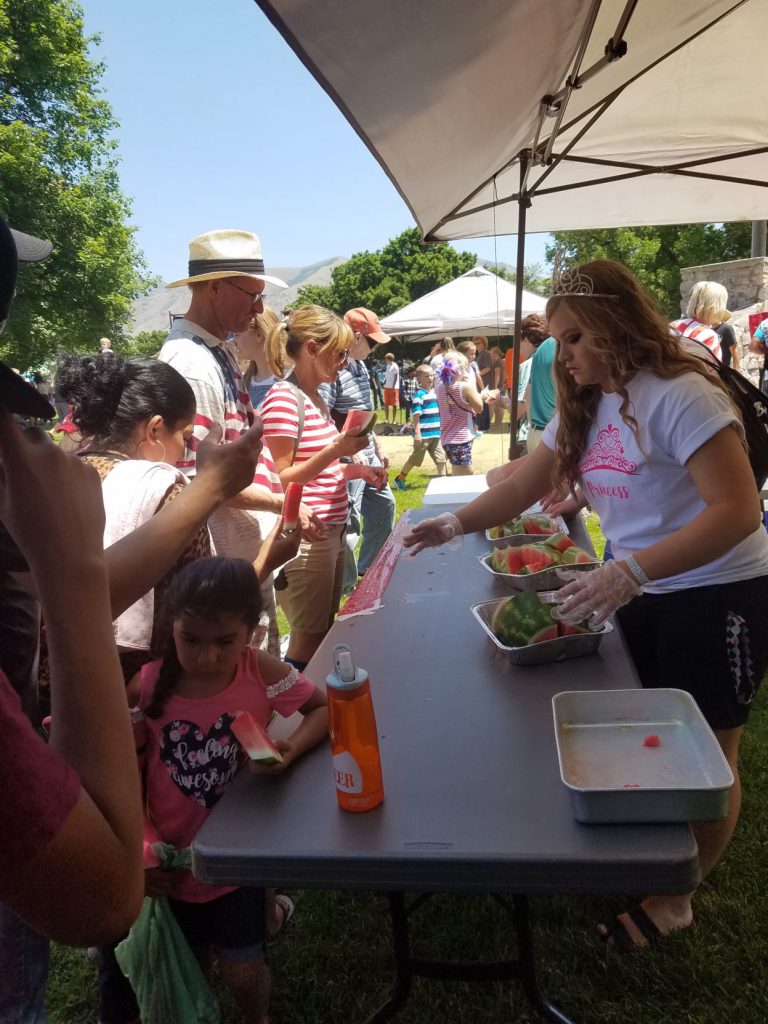 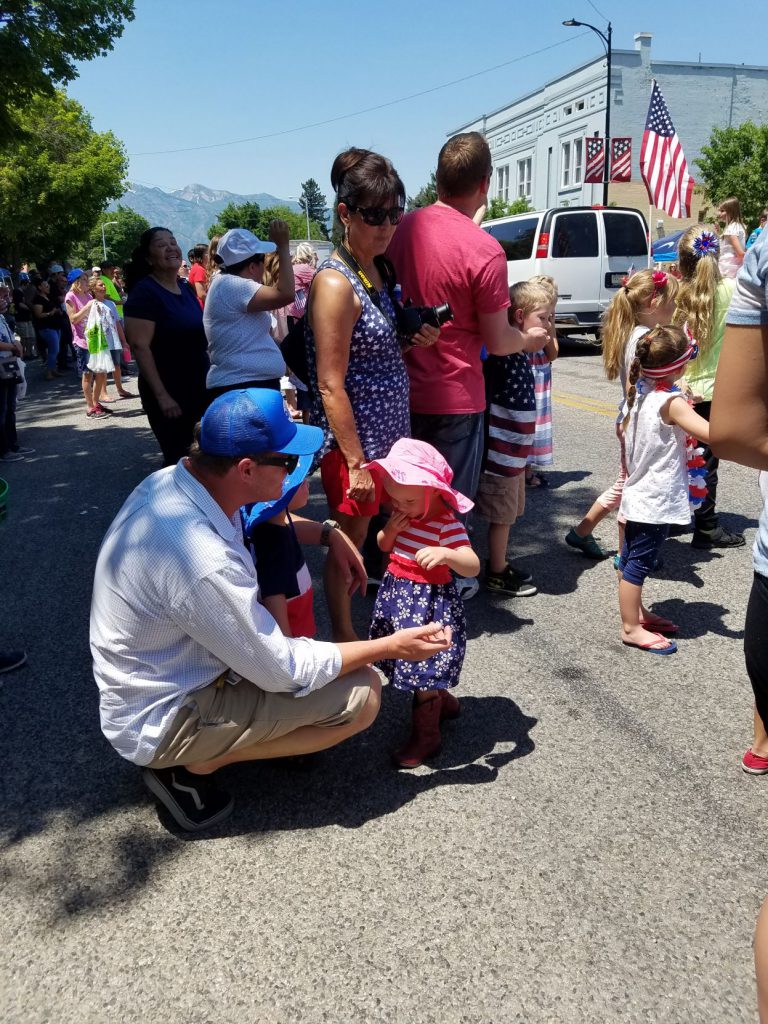 Brett Hart watches Hyrum City's 2017 Fourth of July parade with his two-year-old twins, Maydin and McGuire. Hart and his wife, Rhonna, currently live in Farmington and are planning a move to Hyrum. 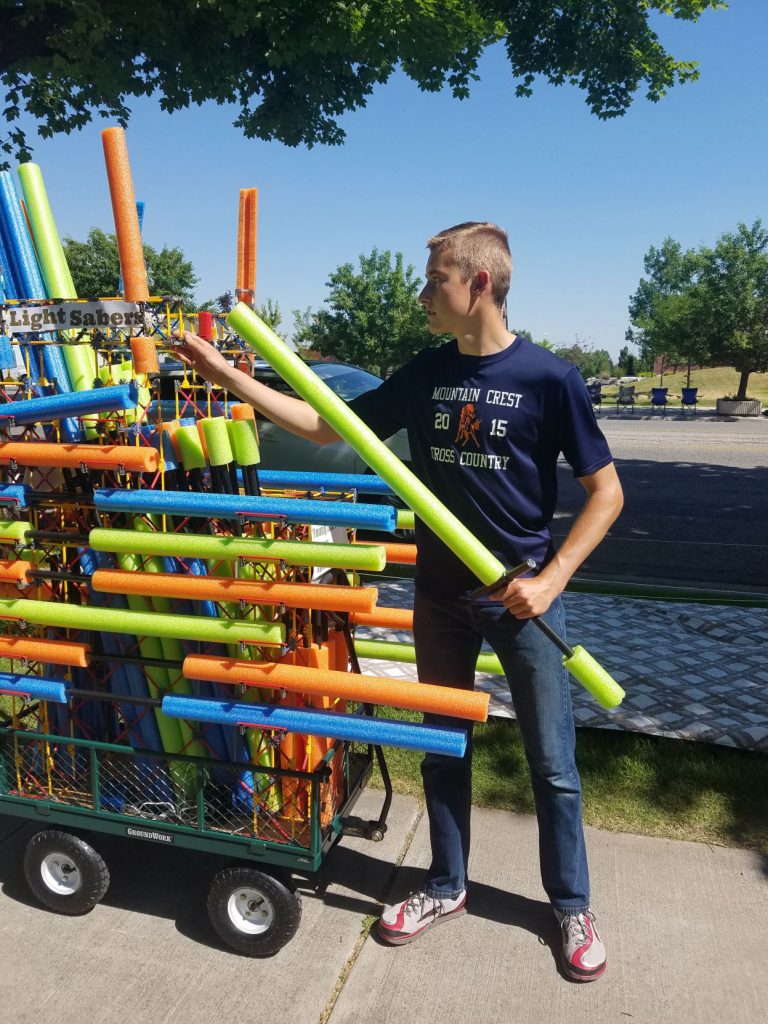 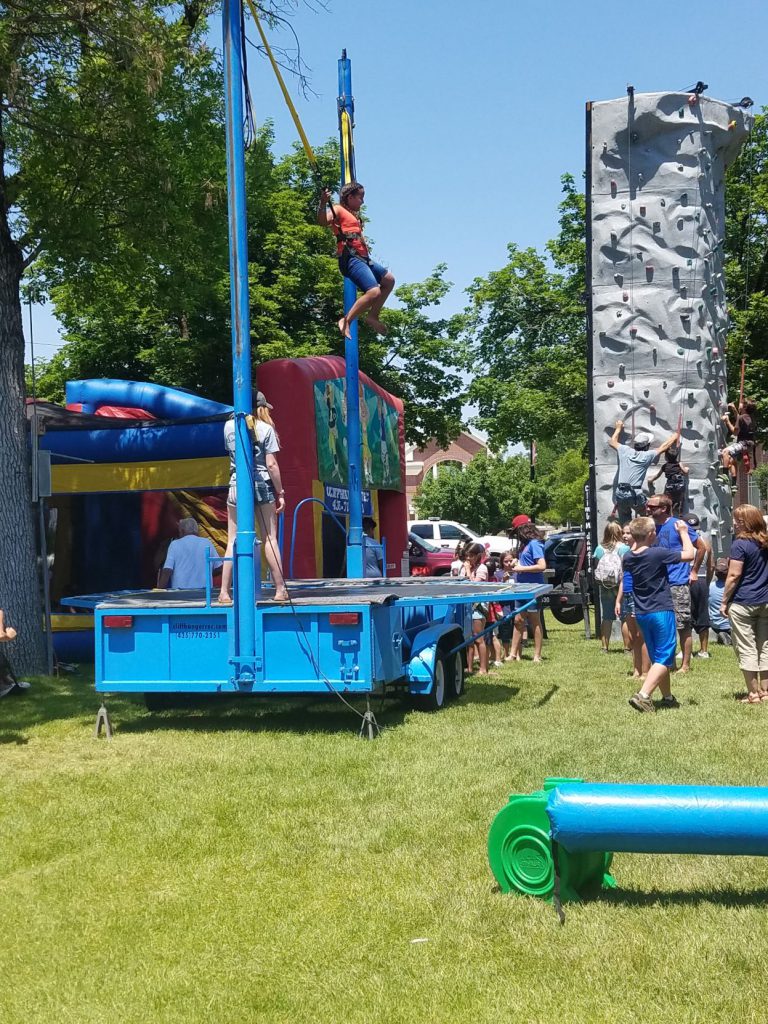 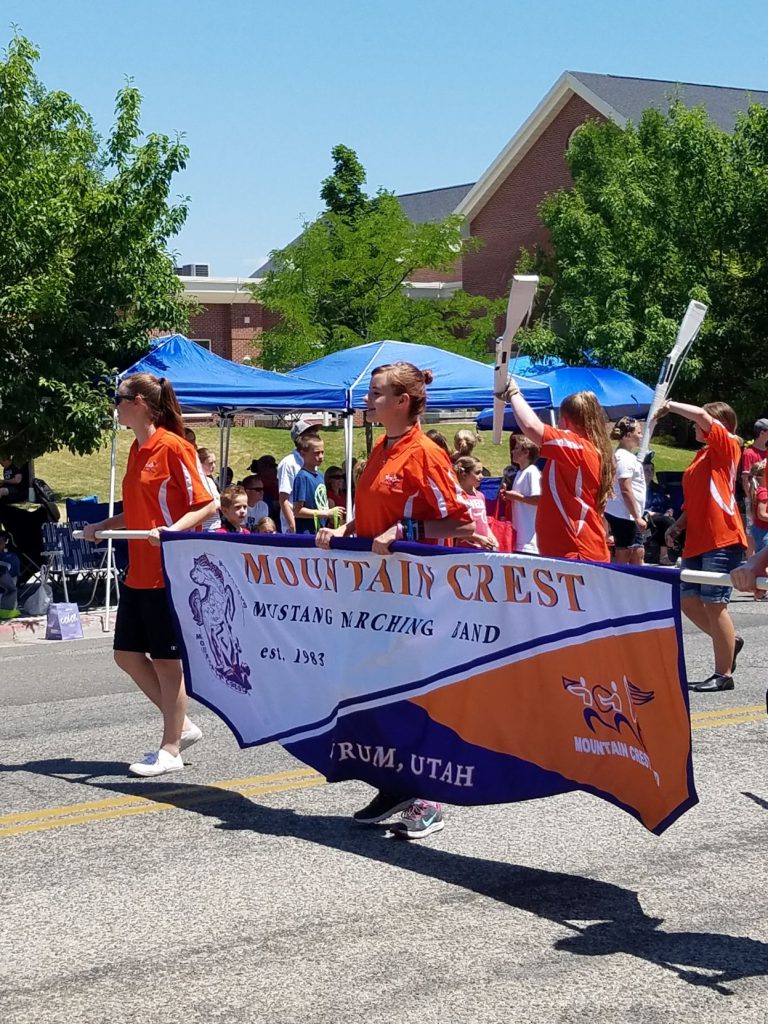 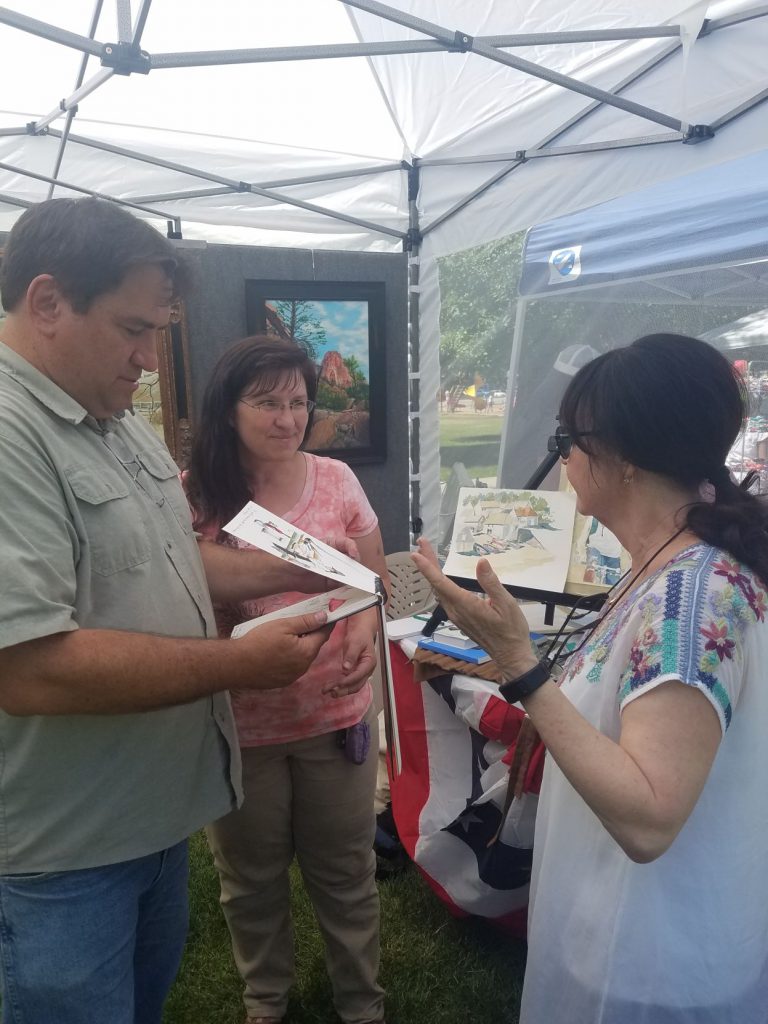 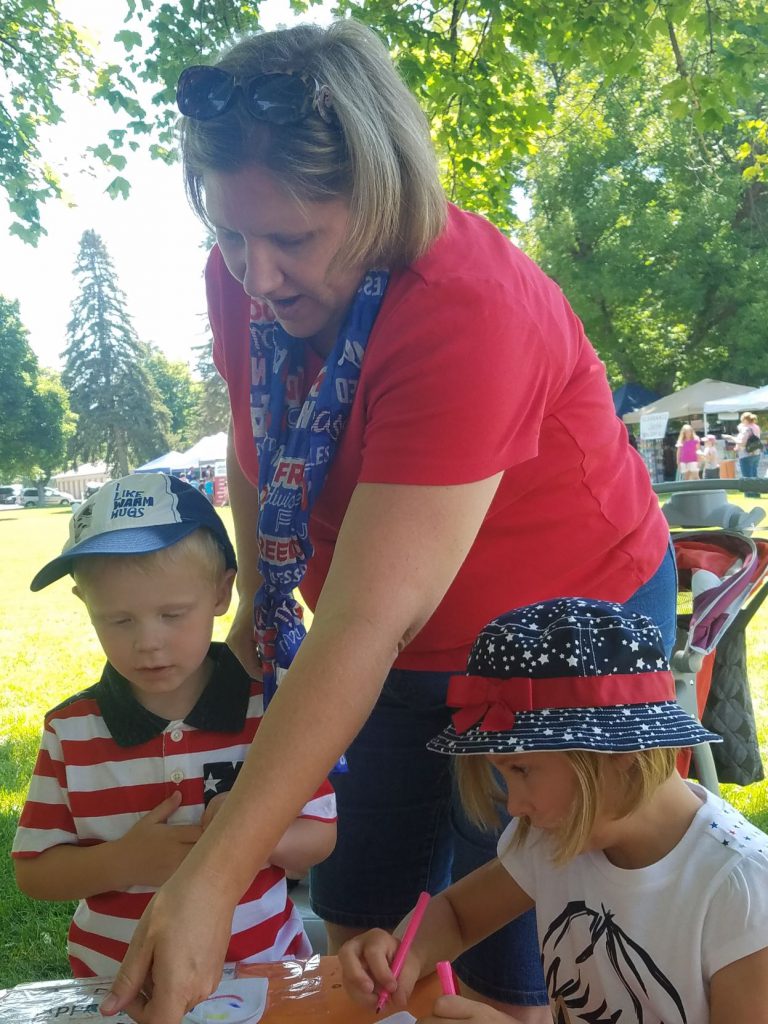 Angel Larsen and two of her children, Evey and Tate, at Hyrum City's Star Spangled Celebration 2017.