<p style=”text-align: left;”><em>”Next Miss Binney taught the class the words of a puzzling song about “the dawnzer lee light,” which Ramona did not understand because she did not know what a dawnzer was.  “Oh, say, can you see by the dawnzer lee light,” sang Miss Binney, and Ramona decided that a dawnzer was another word for a lamp.” <a href=”https://www.harpercollins.com/9780380709540/ramona-the-pest”>Ramona the Pest</a> (1968) by Beverly Cleary</em>

LOGAN — Following an annual Independence Day tradition for the 29<sup>th</sup> year, <a href=”http://www.npr.org/”>NPR</a> hosts, reporters, newscasters and commentators read the <a href=”http://www.ushistory.org/declaration/document/”>Declaration of Independence</a> on Morning Edition. For the first time, NPR simultaneously presented the historic document in a series of 112 tweets, intended to inspire patriotism but instead inciting what may perhaps be called Twitter’s first riot. A dialogue of more than 5,000 responding tweets ensued, many by people who didn’t recognize the words being shared as what CNN called “one of our nation’s most influential pieces of writing.”

“So, NPR is calling for revolution,” tweeted D.G Davies (@JustEsrafel). “Interesting way to condone the violence while trying to sound ‘patriotic’. Your implications are clear.”

Neither were Wilson Elementary School’s first graders on July 3, when they led the <a href=”http://www.loganutah.org/government/departments/parks_and_recreation/freedom_fire_independence_day_celebration_and_fireworks_show.php”>Freedom Fire 2017</a> crowd at the USU Maverik Stadium in the <a href=”http://www.ushistory.org/documents/pledge.htm” target=”_blank”>Pledge of Allegiance</a> and then recited a modified version of the pledge explaining ‘What the Pledge of Allegiance means to me.’

Social media, however, has been exploding since with implications otherwise. Alleging that educators at Wilson Elementary perhaps had ulterior motives in changing the Pledge of Allegiance, comments on Facebook spurred a contentious dialogue, with supporters and protestors of the students’ presentation clashing intensely.

“This is extremely disturbing to me,” Lane Patterson posted.  “Why are we changing something that has represented our great nation since it’s [sic] induction? Are you offended? Then you have the right to not recite it. As a combat veteran with multiple deployments under my belt I find this extremely disrespectful to those who gave their lives defending our freedoms…such a shame, so glad I wasn’t there for it.”

Offering an opposing view, Karrianne Harris wrote, “I love that my three Wilson students have learned the meaning of the words of the pledge! They were taught the actual words and can recite it perfectly as it was written, and the additional wording was a perfect age appropriate way to help them learn the meaning.”

“I’m ok with the dialogue,” said Superintendent Frank Schofield, after the <a href=”http://www.loganschools.org/”>Logan City School District</a> published a <a href=”https://www.facebook.com/permalink.php?story_fbid=1923488804601228&amp;id=1603501973266581″ target=”_blank”>response</a> to the flurry on Facebook. “I definitely understand if someone sincerely thought that our students or our staff were modifying the Pledge of Alliance…I could definitely understand concerns. What people saw and what they heard the students recite in addition to the pledge is one of the teaching tools that we use. It’s helping students understand the language of the Pledge of Allegiance using vocabulary that’s more familiar to the students, that’s perhaps in some cases easier to explain. Our teachers do that consciously because of how they understand how young minds learn and how they interact with new information.”

“Unacceptable reasoning,” wrote Don Sleeper in response to the district’s message. “All you would needed to have done is have them watch or read a transcription of this…”

Sleeper was referencing a YouTube video explaining the Pledge of Allegiance’s meaning without altering its verbiage.

“Red Skelton’s version is inspiring,” Logan City School District replied. “Our teachers have the same intent as they present teach our students about the pledge. The vocabulary in the Red Skelton version is somewhat beyond the grasp of most 6-7 year old children, especially those whose first language is not English. We are proud of the lessons in civics and patriotism our students are learning, and the work our teachers do in preparing them for life in our country.”

<a href=”http://history.usu.edu/faculty/faculty-directory/john-barton”>John Barton</a>, principal lecturer in the Department of History at Utah State University, said as he analyzed both the NPR outcry and the Freedom Fire fiasco, his initial response to both controversies was the same.

“My immediate reaction is not any different than something I oft times try to lead my students into a discussion about,” he said. “Part of the problem really, truly is that we have a great deal of ignorance. And ignorance is not being rude, although that’s happening too, but rather unknowledgeable. Few in this generation have read the Declaration of Independence in its complete form…but when we get to the Declaration of Independence, that’s powerful. We should hear that. And we should not be so quick to display our own ignorance or even in a journalistic setting reward those that don’t know what they’re talking about. I don’t know whether we need to ridicule them or scorn them, but we should teach them.”

<p style=”text-align: left;”>“Let me bounce to the children,” Barton continued. “I would have preferred a teacher to teach them the Pledge of Allegiance the way it was written and teach them what each word, what each phrase means. Even first graders can learn that. It’s not beyond their capability. But should children be publicly scorned and ridiculed over an incident such as this? Is this today’s critical thinking?”

Schofield said he believes what may have spurred the debate after Freedom Fire is the result of a technical error during the presentation that occurred when the modified text of the Pledge of Allegiance was displayed too early on a big screen.

“I think that’s where some of the confusion came from,” he said.  “It just got put up on the screen at the wrong time…so someone would have had to have been listening very carefully to hear what the students were saying and to understand what was going on. And granted, sometimes in a stadium that large, sometimes it can be difficult, especially when it’s a six-year-old speaking into a microphone. That can be tough.”

Schofield said the Wilson Elementary first graders initially shared their Freedom Fire presentation during a patriotic program at their school in May without incident. He said there was no negative response from the community at that time, and his office hasn’t actually received any phone calls or direct emails about what happened Monday evening. It’s all been online.

“It’s easy for people to engage with social media,” Schofield said. “You’re not having to have a conversation with someone. You’re able to sit down and your computer and post a comment. I just think the ease of access—you can do it from anywhere you want at any time—makes that an attractive venue for people to express their thoughts. I think where we go from here is we continue to try to ensure that our parents and our parent community understands what we do at school and the reasons why.”

Barton agrees that building understanding is key, but says it can be difficult in today’s political environment.

“Back in the 1950s, Orson Wells read from his new novel ‘The War of the Worlds’ and people went into a hysteria fearing that we were under attack from outer space,” he said. “This reminds me of that in some degree. I find our society today extraordinarily prickly, easily offended, quick to point the finger instead of taking the high road and trying to see what people meant by what they said and what they did.”

“I think the takeaway is…first with just those sweet little kids,” he continued. “For crying out loud, don’t try to prove yourself so eloquent, so critical in your analysis that you overlook what was trying to be achieved. This nation is amazing. Is it faultless? No. Are people all living up to the standards set? No. In fact, every one of us to some degree falter in that, but we’ll get a lot further by pulling together than we will by tearing each other apart. Abraham Lincoln said that if this nation is ever to be destroyed, it won’t come from without. It will come from within, and I believe that is prophetic.” 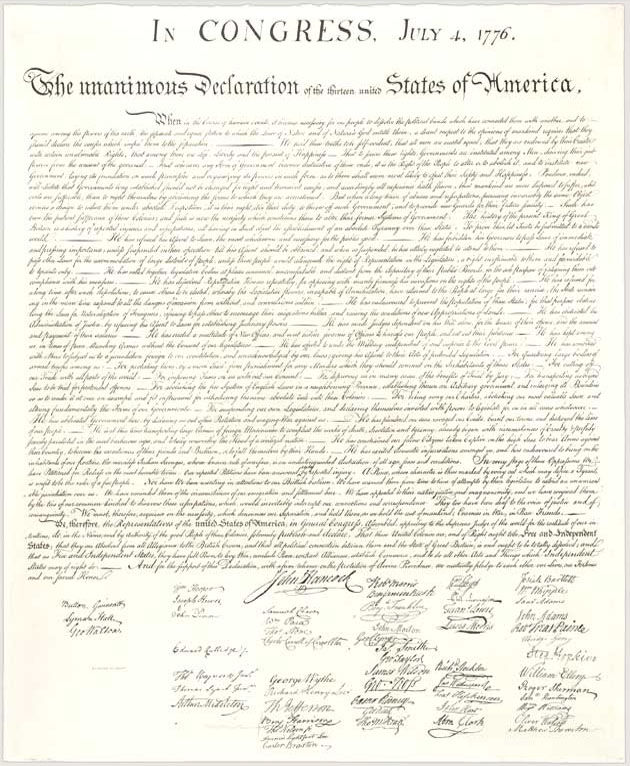 The most frequently reproduced version of the Declaration is that of a print made from a copperplate engraving. William J. Stone made the engraving in 1823 because the parchment Declaration was already fading.