LOGAN – When Andrew Peasley isn’t with the La Grande High School football team in Oregon, the 6-foot-3, 180 pound quarterback likes to be in the mountains with his friends, riding four-wheelers and fishing at a nearby lake.

With that in mind, it’s no surprise the <a href=”http://www.lagrandeobserver.com/home/4821640-151/peasley-named-poy-for-second-straight-season?referrer=bullet1″ target=”_blank”>two-time Greater Oregon League Player of the Year</a> felt Logan would be a good fit, and that it took him less than a week to commit to Utah State after his initial visit.

“I toured the campus and the town and the community felt a lot like La Grande,” he said. “That was a huge thing for me, it felt like home.”

The like-home Cache Valley feel helped lead to a commitment, but so did the athletic facilities and the educational opportunities. Peasley said the biggest thing was how he felt with the coaches. He said he liked head coach Matt Wells’ style and determination, said that Stacy Collins got him “pumped up” and that he is confident he can fit into David Yost’s new offense.

“I’ve ran kind of a spread offense, fast-paced my whole life, kind of since the fourth grade,” Peasley said. “I think I’ve taken just one snap under center since high school.”

That is the kind of player Peasley is. Take a look at his <a href=”http://www.hudl.com/v/23j68q” target=”_blank”>highlights</a> and you’ll see an elusive quarterback that can get out of the pocket and make plays when trouble arises – sometimes by scrambling ahead and avoiding tacklers and other times by finding the open man downfield.

“Mostly I like to read the field real quick and if there is nothing then I use my feet to escape,” he said. “That is probably my biggest advantage.”

According to <a href=”http://www.scout.com/college/utah-state/story/1785746-utah-state-lands-their-2018-qb” target=”_blank”>Scout.com</a>, Peasley threw for 4,318 yards and 45 touchdowns in his two seasons as a starting quarterback. Added to that was 931 rushing yards for another 23 touchdowns.

He still has one year of high school football left before he leaves for Logan. He wants to use that time to improve aspects of his game – one of those being his performance in the pocket.

“Getting my drops down, being on time, being a lot more accurate,” he said. “I know I have the strength to throw the ball but it’s just the timing and accuracy I really need to work on. It’s been improving a lot, actually, over the past three months.”

He isn’t sure what he will study at Utah State quite yet. Right now he is leaning toward physical therapy, but he won’t be joining the team until 2019, and knows there is still time to decide. Until then, he said he is just “pumped to be an Aggie.” 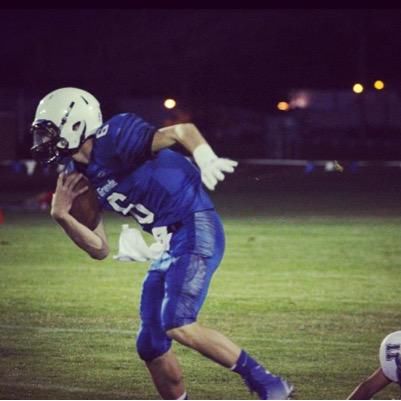