A car is submerged on a freeway flooded by Tropical Storm Harvey on Sunday, Aug. 27, 2017, near downtown Houston, Texas. The remnants of Hurricane Harvey sent devastating floods pouring into Houston on Sunday as rising water chased thousands of people to rooftops or higher ground. (AP Photo/Charlie Riedel)

HOUSTON (AP) — Officials released more water from Houston-area reservoirs overwhelmed by Harvey early Monday in a move aimed at protecting the city’s downtown from devastating floods but that could still endanger thousands of homes, even as the nation’s fourth-largest city anticipated more rain.

Harvey, which made landfall late Friday as a Category 4 hurricane and has lingered dropping heavy rain as a tropical storm, sent devastating floods pouring into Houston on Sunday. The rising water chased thousands of people to rooftops or higher ground and overwhelmed rescuers who could not keep up with the constant calls for help.

Federal Emergency Management Agency Director Brock Long said during a news conference Monday that 50 counties in Texas are affected by the flooding and that a tremendous amount of rainfall is in the cards for southwest Louisiana. The rain and floods have been blamed in at least two deaths.

Residents living near the Addicks and Barker reservoirs — that were designed to prevent flooding in downtown Houston — were warned Sunday that a controlled release from both reservoirs would cause additional street flooding that could spill into homes. Rising water levels and continuing rain was putting pressure on the dams that could fail without the release. Harris and Fort Bend county officials advised residents to pack their cars Sunday night and leave in the morning.

Private boat owners from Houston and surrounding areas are using their vessels to assist first responders who are trying to rescue scores of people stranded by the floods from Tropical Storm Harvey. (Aug. 28)

“When the sun comes up, get out,” said Jeff Lindner, a meteorologist for the Harris County Flood Control District. “And you don’t have to go far, you just need to get out of this area.”

The Army Corps of Engineers started the reservoir releases before 2 a.m. Monday — ahead of schedule — because water levels were increasing at a rate of more than 6 inches (15 centimeters) per hour, Corps spokesman Jay Townsend said.

On Sunday, incessant rain covered much of Houston in turbid, gray-green water and turned streets into rivers navigable only by boat. In a rescue effort that recalled the aftermath of Hurricane Katrina, helicopters landed near flooded freeways, airboats buzzed across submerged neighborhoods and high-water vehicles plowed through water-logged intersections. Some people managed with kayaks or canoes or swam.

Volunteers joined emergency teams in pulling people from their homes or from the water. Authorities urged people to get on top of their houses to avoid becoming trapped in attics and to wave sheets or towels to draw attention to their location.

“I’m not sure where the water is going because it’s just so much that we can’t really absorb more in the ground at this point. … We have way too much water and not enough places for it to drain,” Acevedo told MSNBC’s “Morning Joe.”

And on the possibility of the rain subsiding, he said: “We’re just keeping our fingers crossed”

As the water rose, the National Weather Service issued another ominous forecast: Before the storm is gone, some parts of Houston and its suburbs could get as much as 50 inches (1.3 meters) of rain. That would be the highest amount ever recorded in Texas.

FEMA’s Long predicted that the aftermath of the storm would require FEMA’s involvement for years.

“This disaster’s going to be a landmark event,” Long said.

The National Weather Service meanwhile warned that the catastrophic flooding would worsen due to heavy rainfall in the coming days and that it would be slow to recede once Harvey finally moves on. Director Louis Uccellini said during a news conference Monday that up to 20 inches (51 centimeters) of rain could fall in the coming days, on top of the more than 30 inches (76 centimeters) some places have already seen.

Louisiana Gov. John Bel Edwards requested a federal emergency disaster declaration in a letter to the White House, underlining that parts of the state likely to be affected by Harvey are still recovering from devastating flooding in 2016.

It was not clear how many people have been plucked from the floodwaters in Texas. Up to 1,200 people had to be rescued in Galveston County alone, said Mark Henry, the county judge. Rescuers were giving priority to life-and-death situations, leaving many affected families to fend for themselves. And several hospitals in the Houston area were evacuated due to the rising waters.

Houston’s George R. Brown Convention Center was quickly opened as a shelter. It was also used as a shelter for Katrina refugees in 2005.

Gillis Leho arrived there soaking wet. She said she awoke Sunday to find her downstairs flooded. She moved some belongings upstairs then grabbed her grandchildren.

“We had to bust a window to get out,” Leho said.

Some people used inflatable beach toys, rubber rafts and even air mattresses to get through the water to safety. Others waded while carrying trash bags stuffed with their belongings and small animals in picnic coolers.

Houston Mayor Sylvester Turner said authorities had received more than 2,000 calls for help and urged drivers to stay off the roads.

“I don’t need to tell anyone this is a very, very serious and unprecedented storm,” Turner said.

The deteriorating situation was bound to provoke questions about the conflicting advice given by the governor and Houston leaders before the hurricane. Gov. Greg Abbott urged people to flee from Harvey’s path, but the Houston mayor issued no evacuation orders and told everyone to stay home.

The governor refused to point fingers on Sunday.

“Now is not the time to second-guess the decisions that were made,” Abbott, a Republican, said at a news conference in Austin. “What’s important is that everybody work together to ensure that we are going to, first, save lives and, second, help people across the state rebuild.”

The mayor, a Democrat, defended his decision, citing the risk of sending the city’s 2.3 million inhabitants onto the highways at the same time.

“If you think the situation right now is bad, and you give an order to evacuate, you are creating a nightmare,” Turner said.

The White House said President Donald Trump would visit Texas on Tuesday. He met Sunday by teleconference with top administration officials to discuss federal support for response and recovery efforts.

The rescues unfolded a day after Harvey settled over the Texas coastline. The system weakened Saturday to a tropical storm. By early Monday, Harvey had shifted a little closer to the coast, hovering about 20 miles (30 kilometers) east of Victoria, with sustained winds of about 40 mph (65 kph). The National Hurricane Center said it continued to edge in a southeasterly direction at 3 mph (4.8 kph).

Harvey was the fiercest hurricane to hit the U.S. in 13 years and the strongest to strike Texas since 1961′s Hurricane Carla, the most powerful Texas hurricane on record. 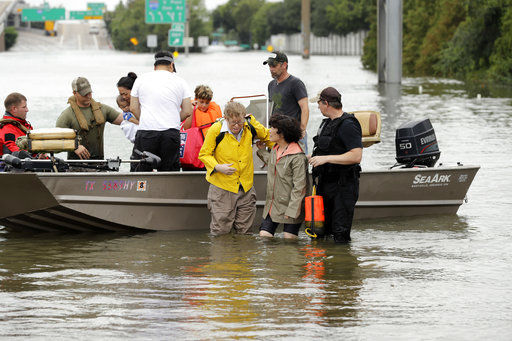 Residents are helped from a boat after being rescued from their flooded homes from Tropical Storm Harvey, Sunday, Aug. 27, 2017, in Houston. (AP Photo/David J. Phillip) 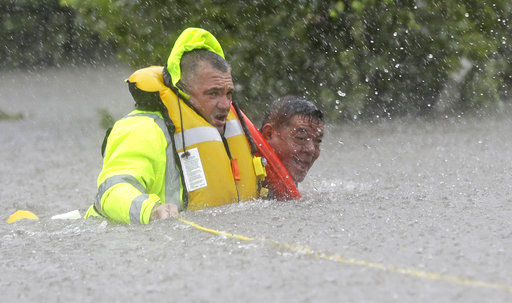 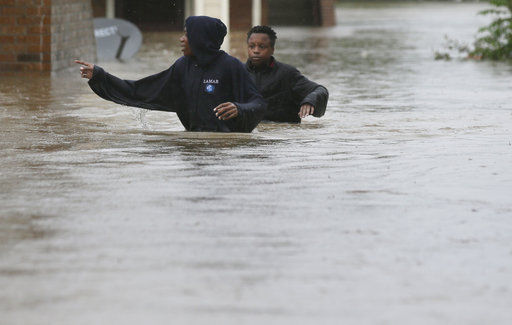