Senior outside Lauren Anderson led the Aggies with 22 kills, the second time this season she has recorded more than 20 kills in a match. Anderson also added 11 digs for her second double-double of the year. Redshirt freshman Jaysa Funk joined her with a double-double, picking up 46 assists and 15 digs in her first collegiate start. Funk was also among the leaders at the net, tallying five blocks (1 solo, 4 assists) as the Aggies totaled a season-high 14.0.

“Jaysa did exactly what we train our setters to do. She ran our offense and we hit .225,” head coach Grayson DuBose said after the match. “For her first start, I thought she did a great job.”

“Lauren Anderson does what Lauren Anderson does,” he said of his outside hitter. “When you are in the gym with her every day, nothing really surprises you. She did a fantastic job and we know what we are going to get from Lauren. She is going to take a big swing at the ball and is going to be a very disciplined hitter.”

Junior libero Tasia Taylor recorded a match-high 21 digs, her second 20-plus dig performance of the year, and junior middle Lauren O’Brien led the USU block with nine, matching a career high. Overall, Utah State hit .225 (53-17-160) during the match to Pacific’s .137 (65-40-183). Senior outside Rachel Gale-Hammond also recorded double-digit kills, finishing the match with 11. O’Brien was the most efficient hitter for the Aggies, hitting .429 with eight kills on 14 attempts with only two errors.

“It was a grind tonight and we were gritty,” DuBose said. “We showed some grit in game five, and game one after being down big and coming back. The fourth set was not very great, but I thought everything else was a nice performance for us today.”

Both teams came out of the gates strong, recording kills on all but one rally over the first 12 points. Pacific recorded seven kills on its first eight points, building an 8-4 lead, and finished the set hitting .314 (18-7-35). The Tigers led by as many as seven points during the opening set, but Utah State came back to within one, 23-22 late on a block by Funk and O’Brien. The Aggies committed an error on the next serve, giving Pacific set point at 24-22. O’Brien answered with a kill to cut the lead back to one, 24-23, but a final kill gave the Tigers the set, 25-23.

Utah State bounced back in the second and third sets, finding its offensive groove and hit over .300 in both frames. USU scored back-to-back points to break a 10-10 tie midway through the second and then scored four straight at the end of the set to win, 25-19. Anderson was responsible for half of the set-clinching points, logging a kill to begin the run and a service ace to punctuate the Aggie victory. Overall, Utah State hit .306 (13-2-36) during the second set.

In the third set, a service ace by Gale-Hammond and kills by Anderson and senior middle Carly Lenzen gave the Aggies an early 4-1 lead. Pacific battled back to tie the frame at 10-10, but Utah State used a three-point push to create some separation, 13-10, and then wrapped up the set 25-20 behind an Anderson kill. Utah State hit .312 (13-3-32) in the third, its highest hitting percentage on the night.

USU appeared to be rolling towards a four-set victory after taking a 12-4 lead in the fourth, capitalizing on nine Pacific errors over the opening rallies. However, the Tigers turned things around and put together a 13-2 run, taking a 17-14 lead and road the momentum to a 25-22 victory to force a fifth set.

The surge carried over into the decisive set as Pacific took an early 3-1 lead. Utah State countered with a 8-2 run, including blocks from O’Brien and senior right side Kayla DeCoursey, and Gale-Hammond and Lenzen, to take a 9-5 advantage. The Aggies then scored four straight over the final rallies to take the match 15-10. The final point came on a block by Anderson and O’Brien, turning away an attempt by Pacific’s leader during the match, Ashlyn Fleming, who hit .312 with 15 kills on 32 attempts and five errors.

Sophomore outside Emily Baptista had the most kills for the Tigers with 18 and sophomore outside Skylar Wines also recorded double figures with 12. Senior libero Katrin Gotterba led five Tigers with double-digit digs, recording a team-best 17, and was followed by senior outside Maycie LaBass (14), Baptista with 13, junior Andie Shelton (13), and freshman setter Hanne De Schrijver with 12. De Schrijver also finished with a double-double, directing the Pacific attack with 56 assists.

Utah State will return to the court tomorrow with two matches slated for Saturday. USU starts the day against Montana State at Noon, and then hosts UC Santa Barbara in the tournament finale at 7 p.m.

Tickets for the season can be purchased online at utahstateaggies.com, at the Dee Glen Smith Spectrum ticket office or by calling 1-888-USTATE-1 or (435) 797-0305. 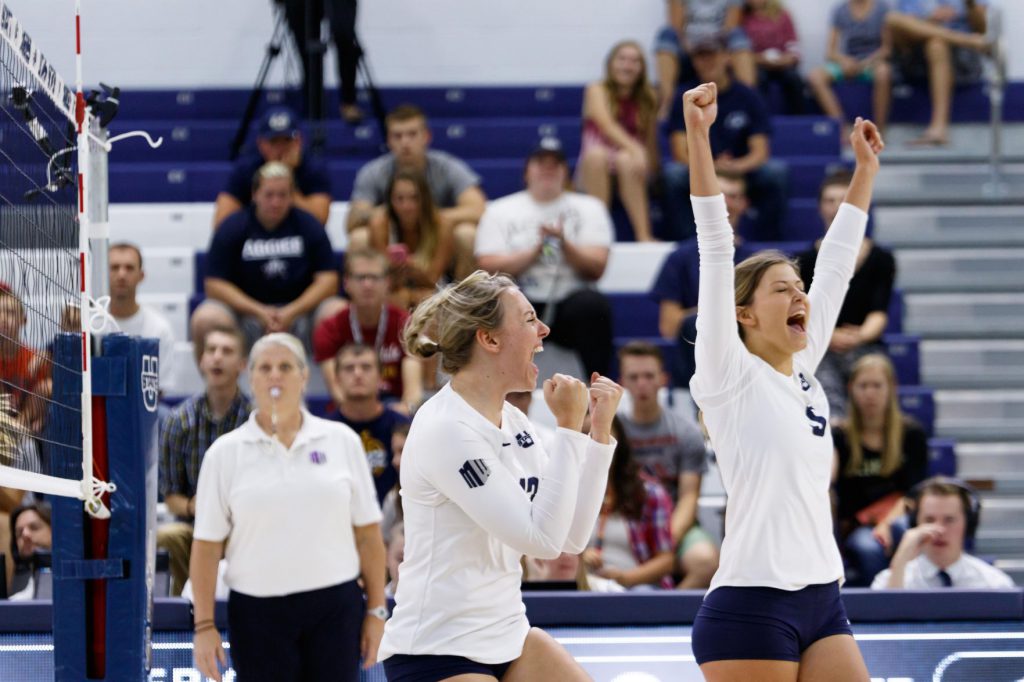 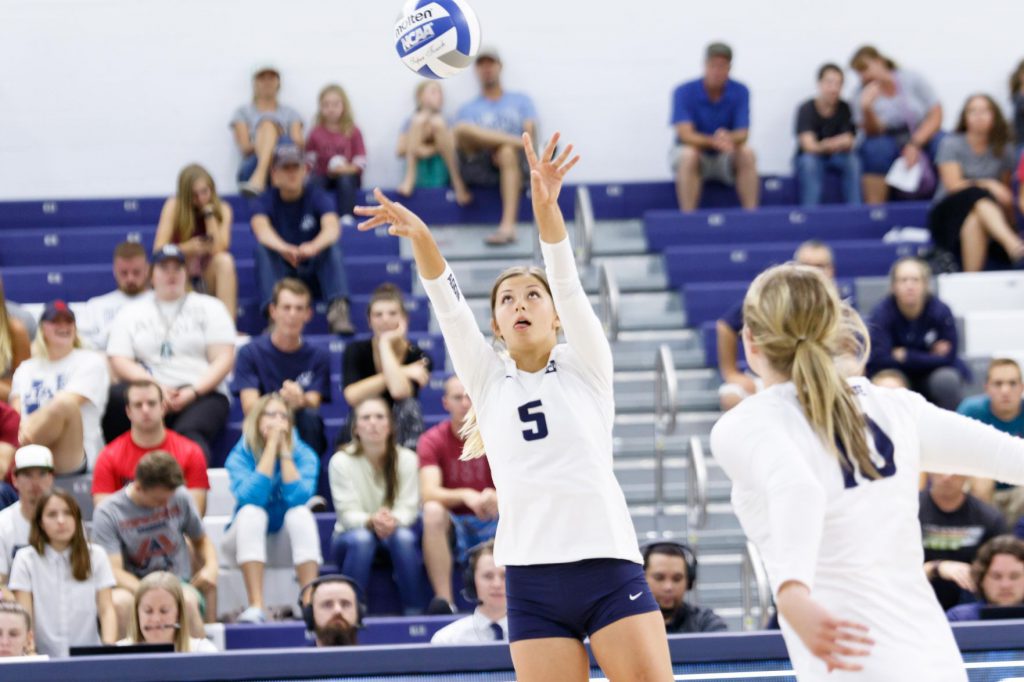 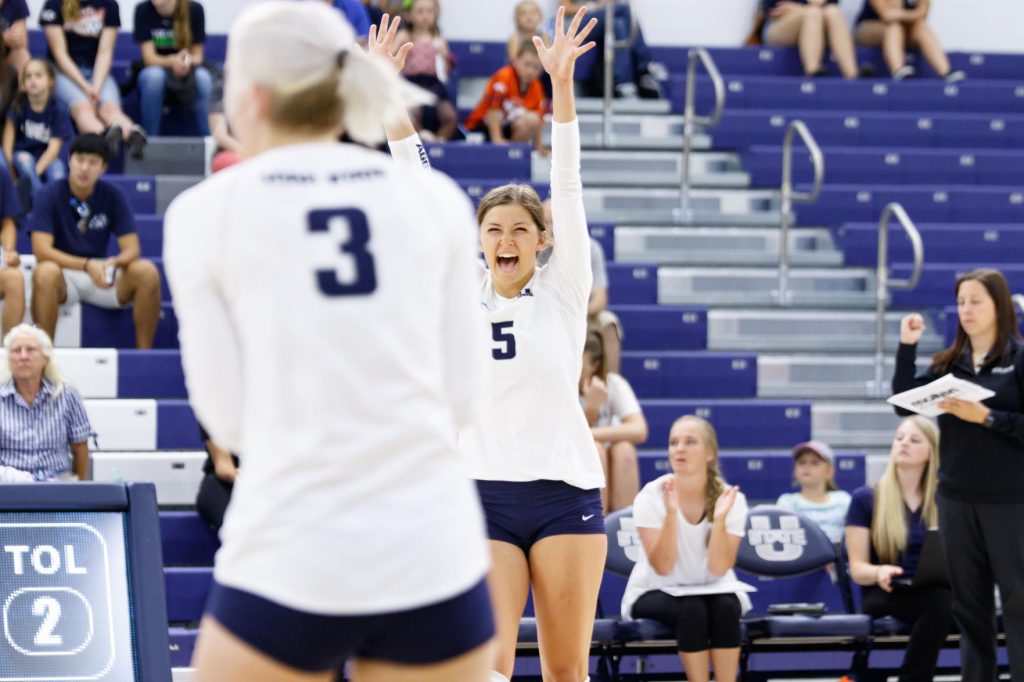 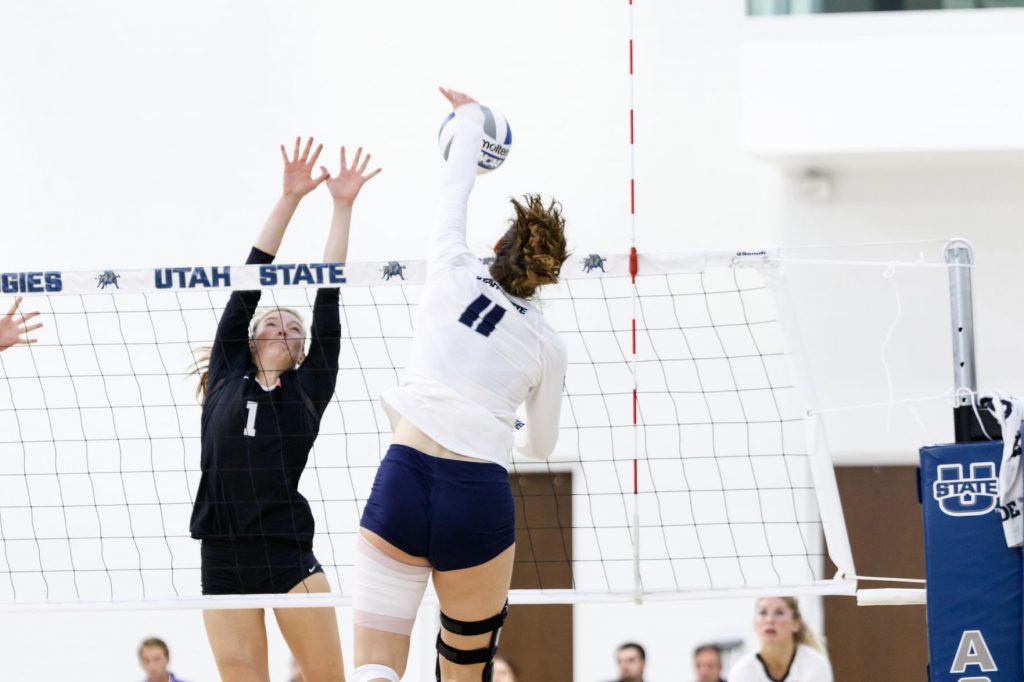 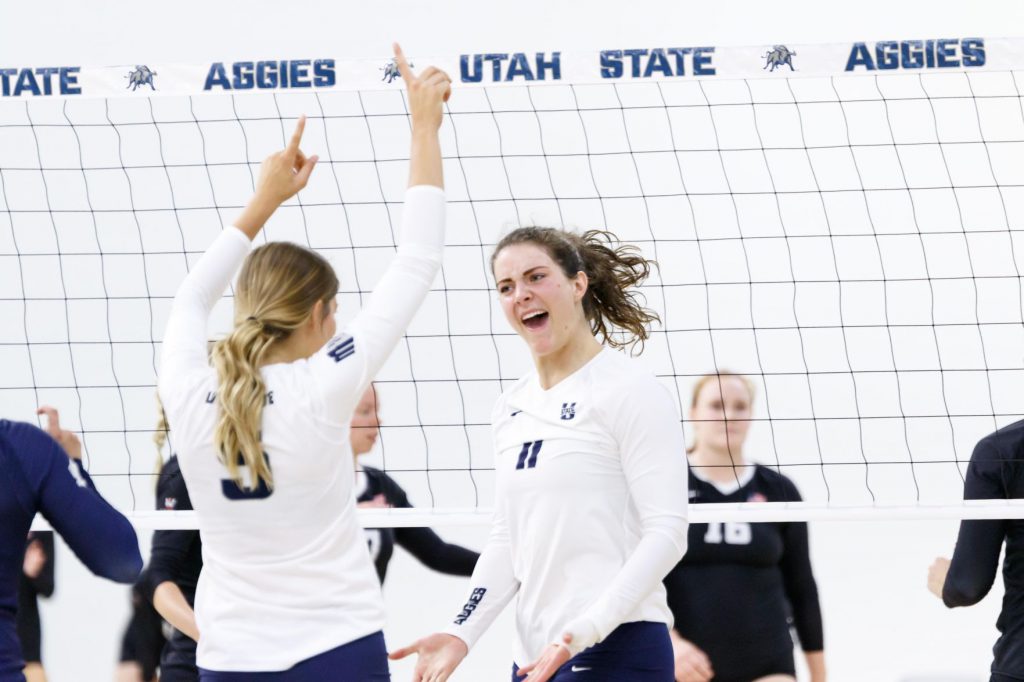 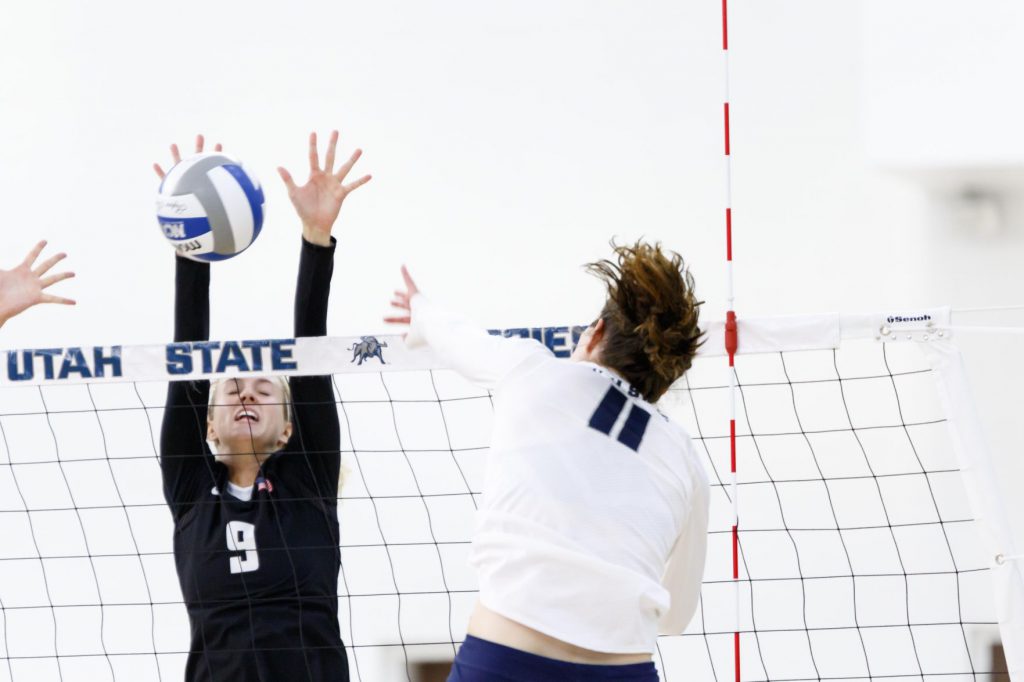 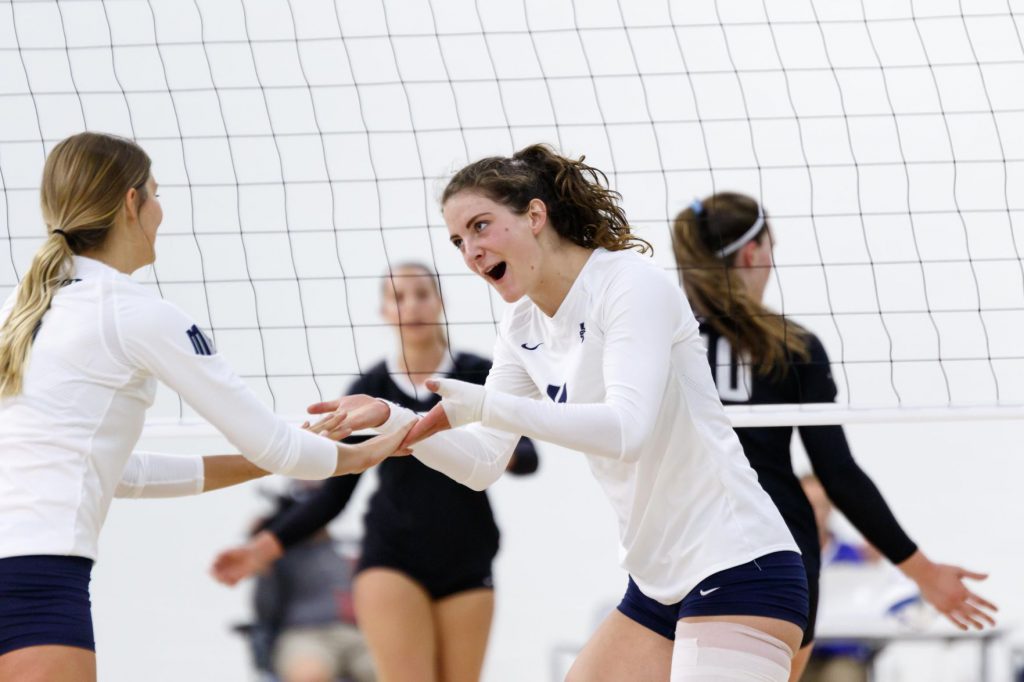 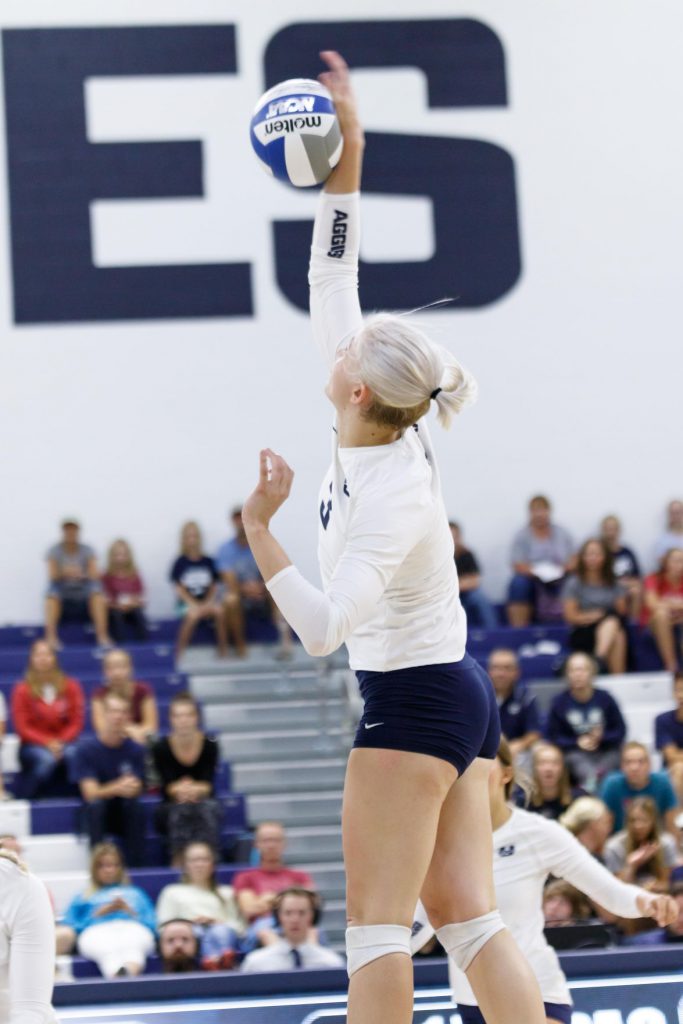 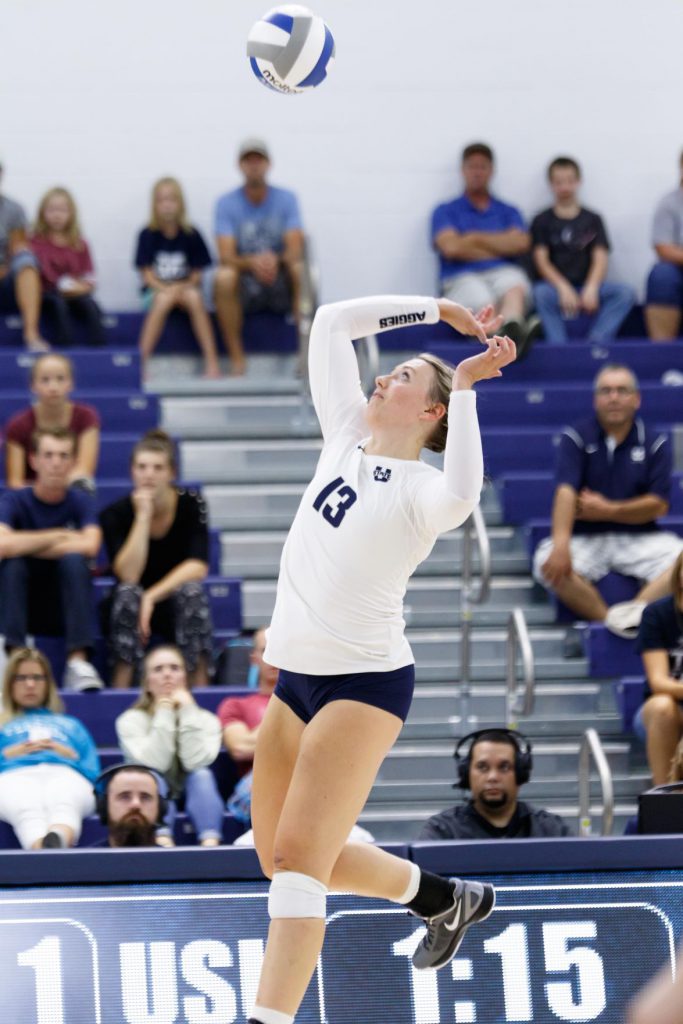 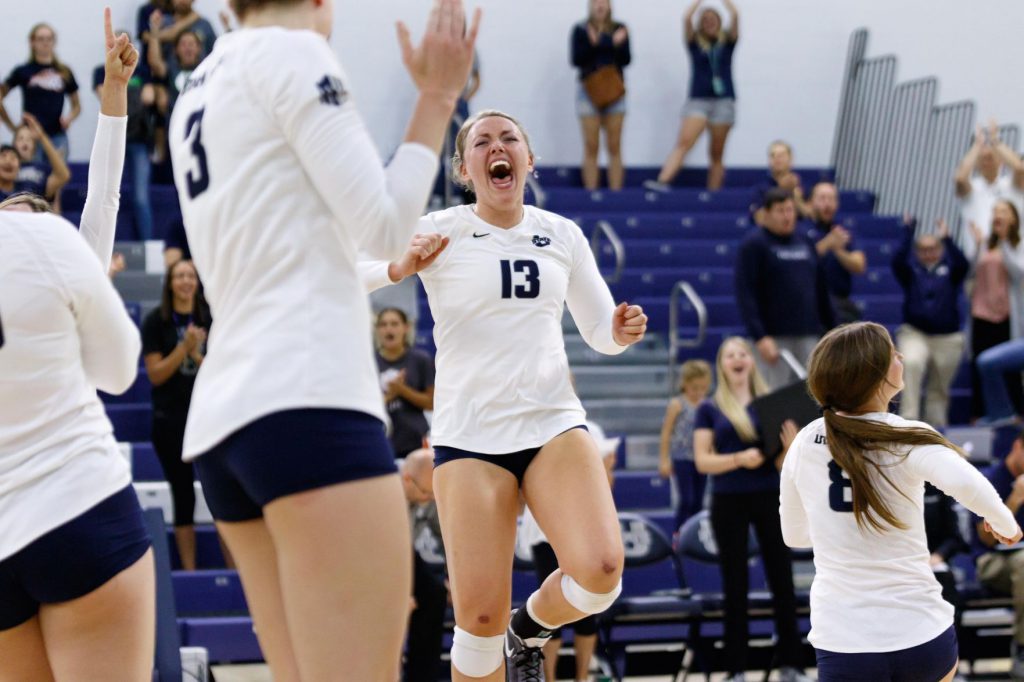 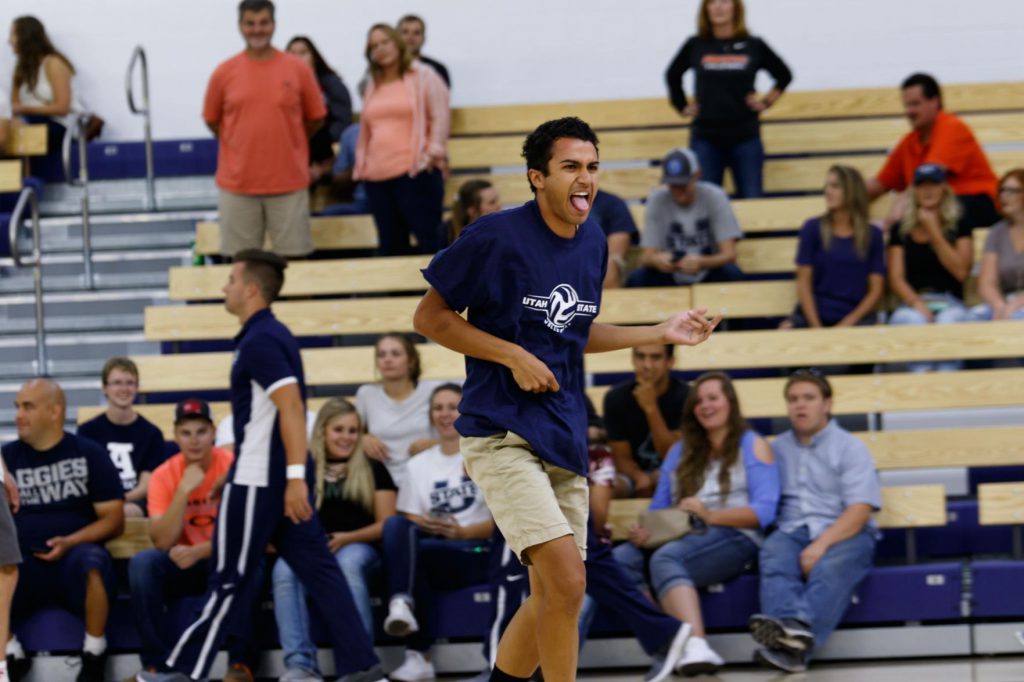 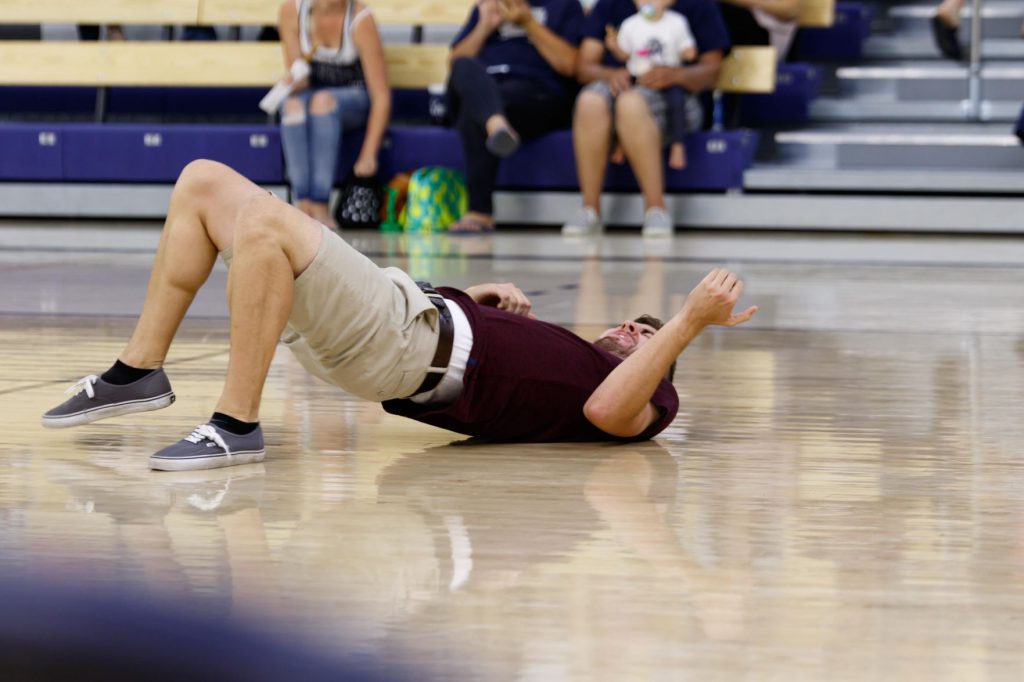 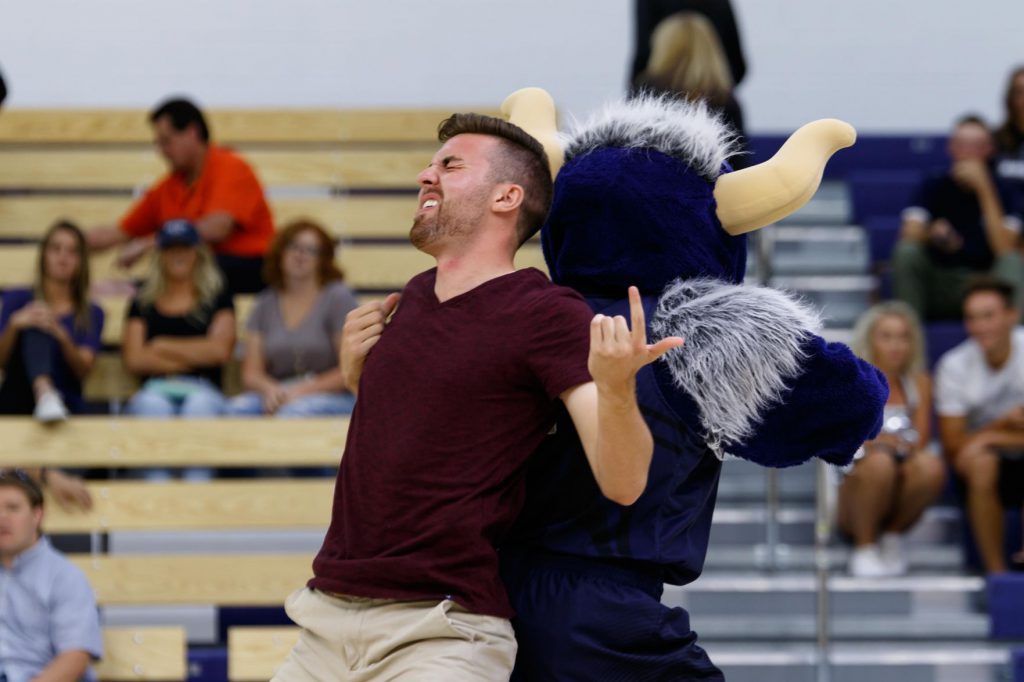 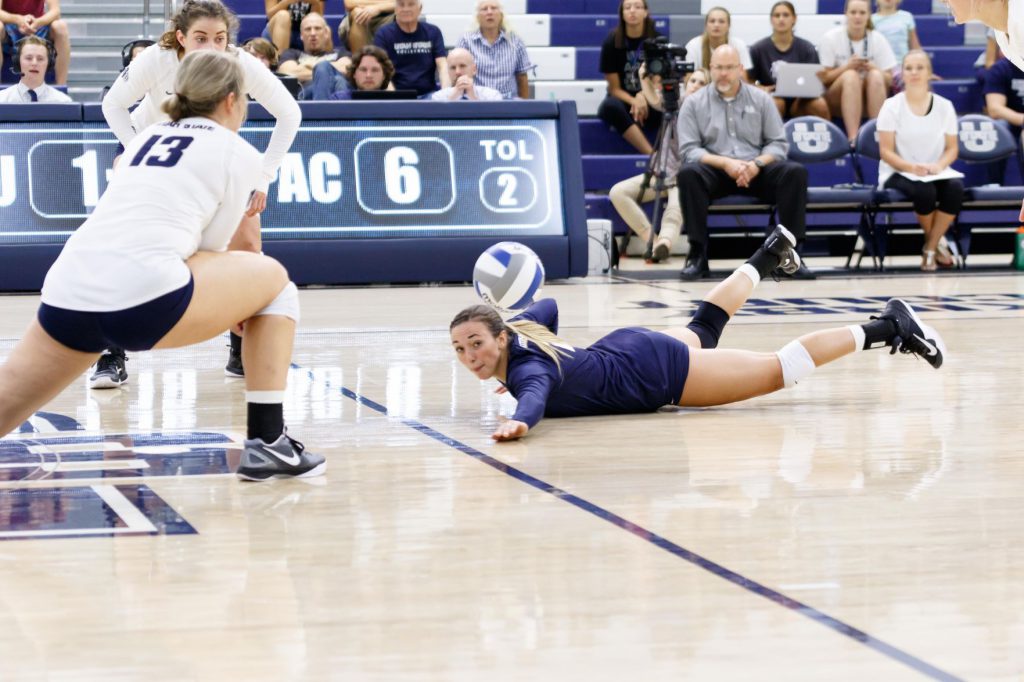 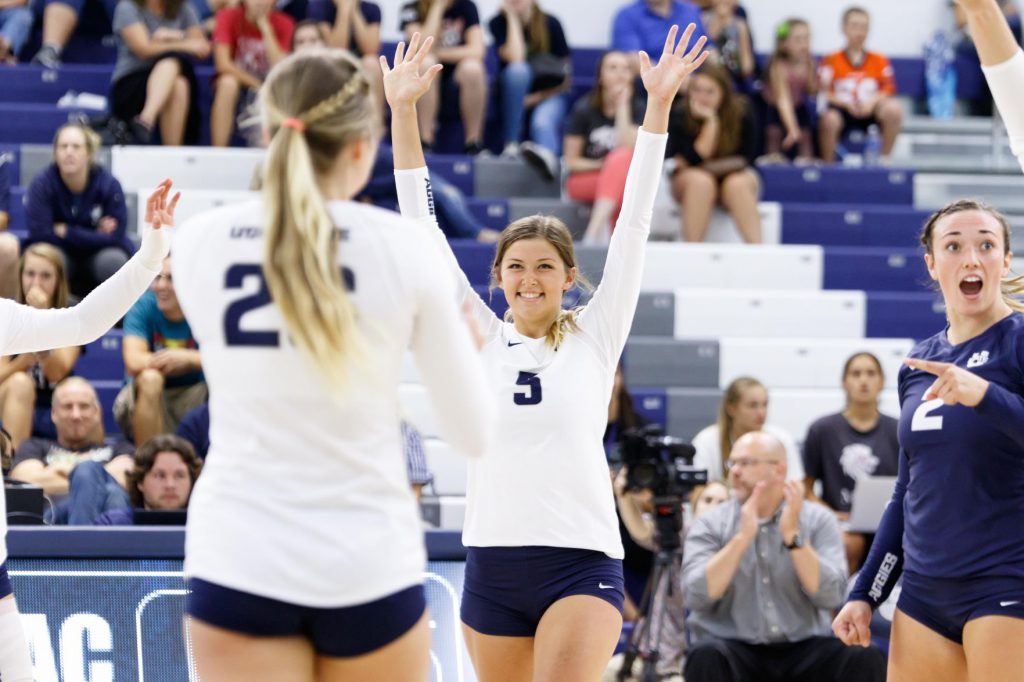 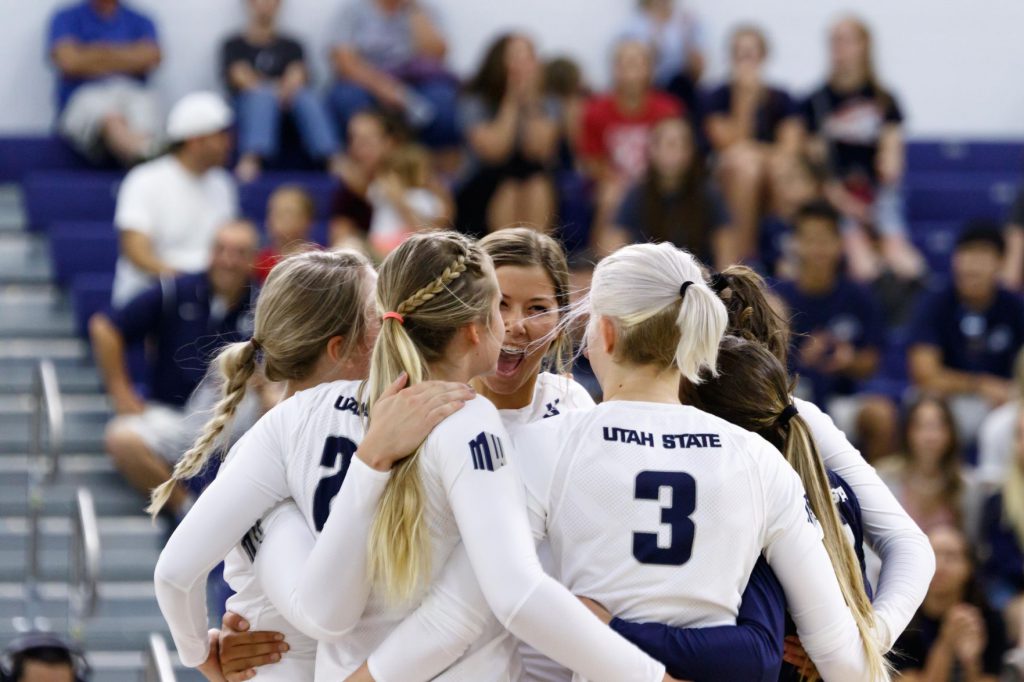 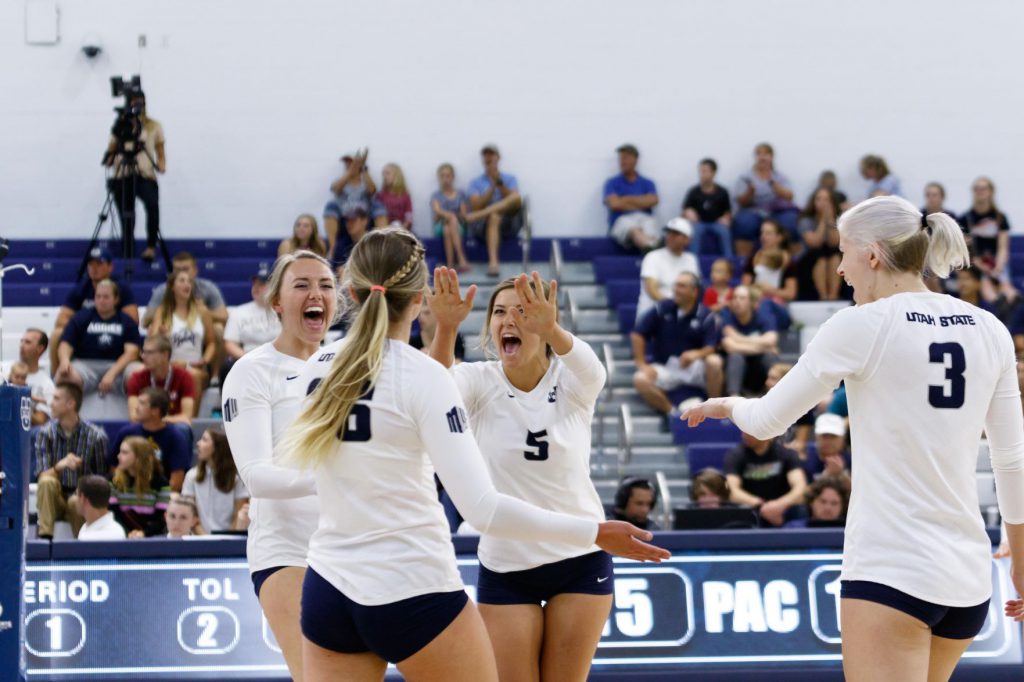 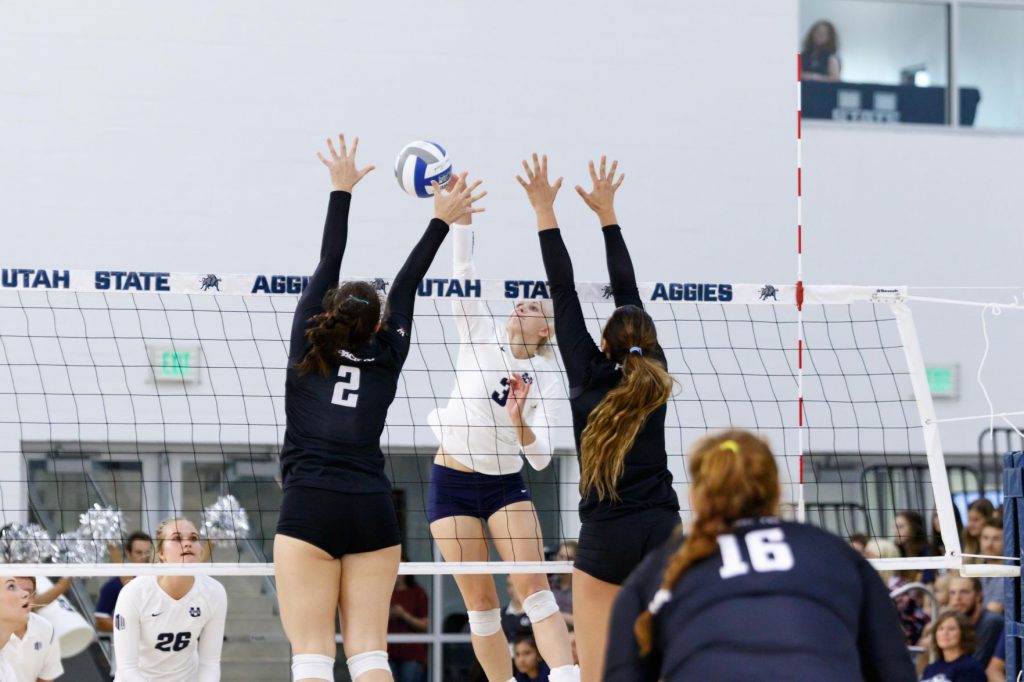 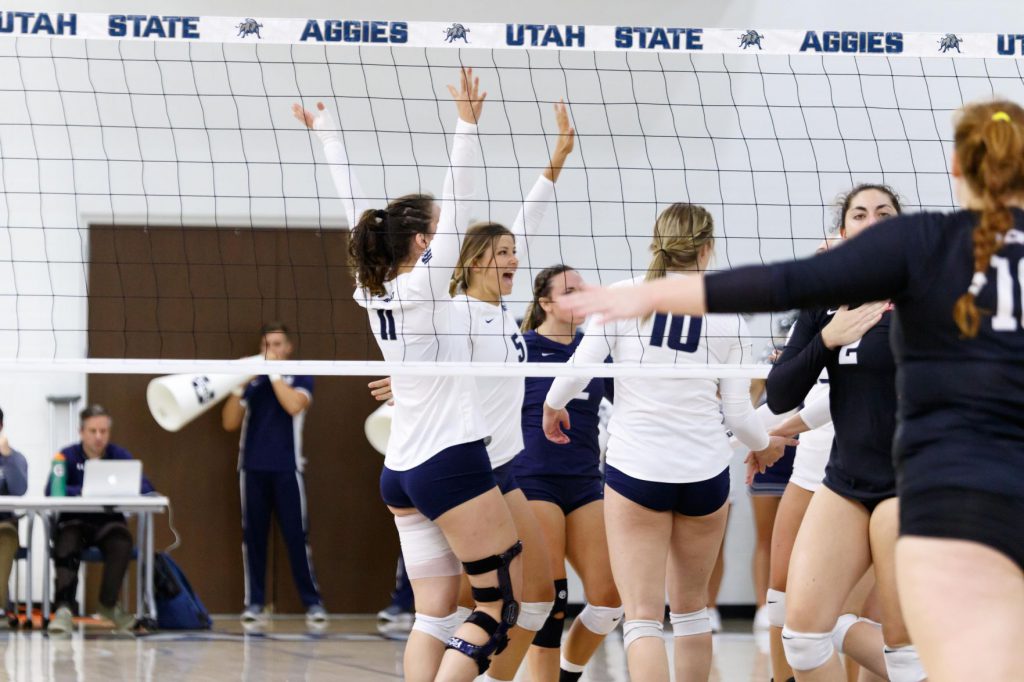 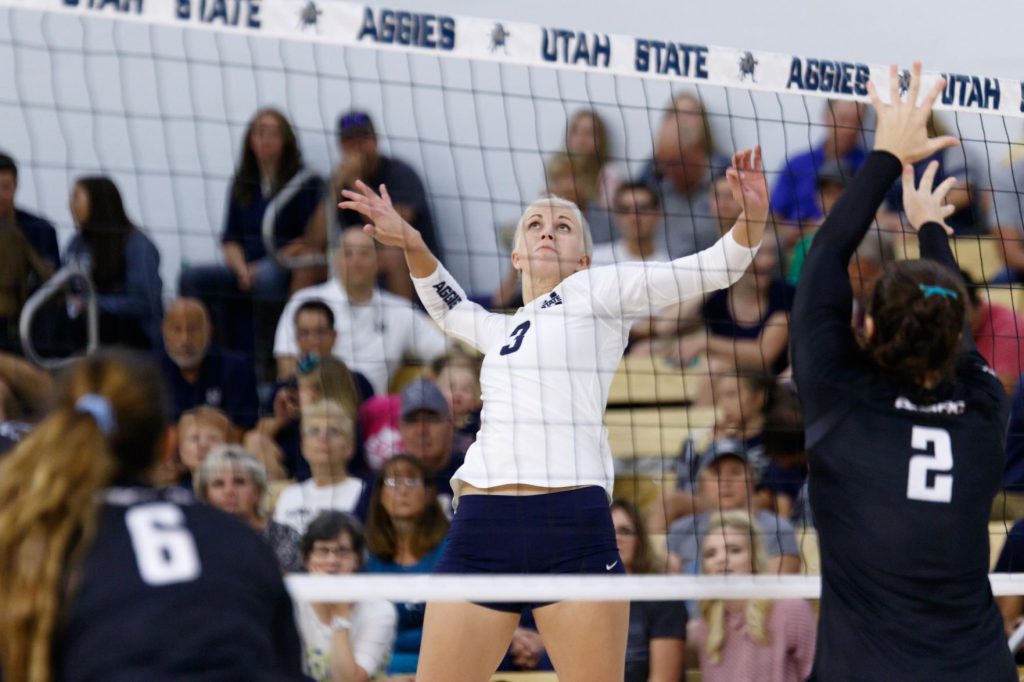 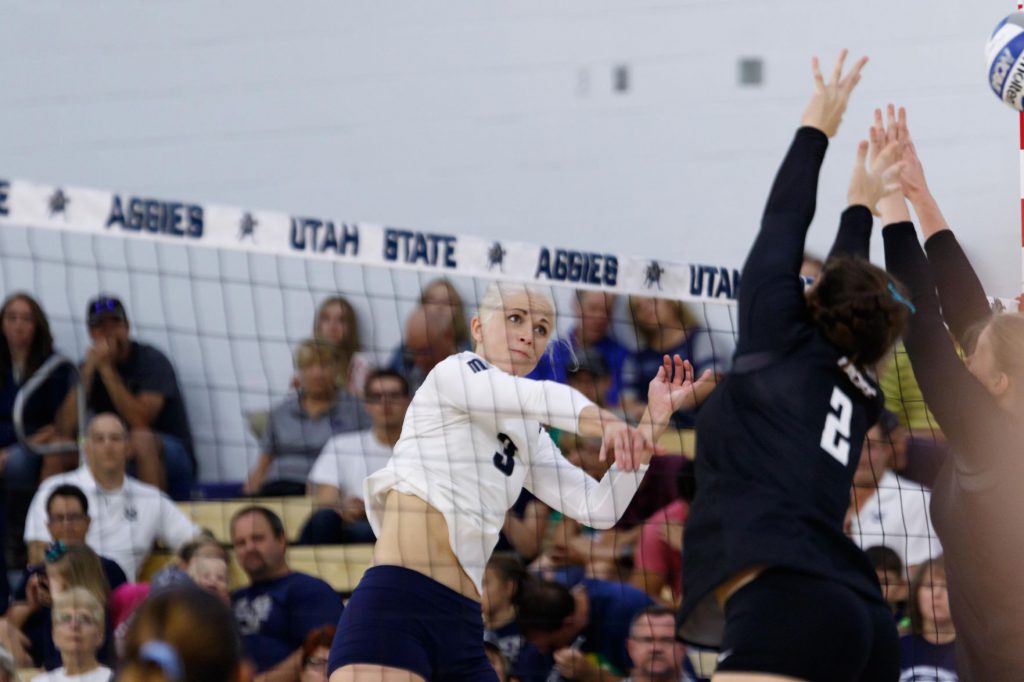 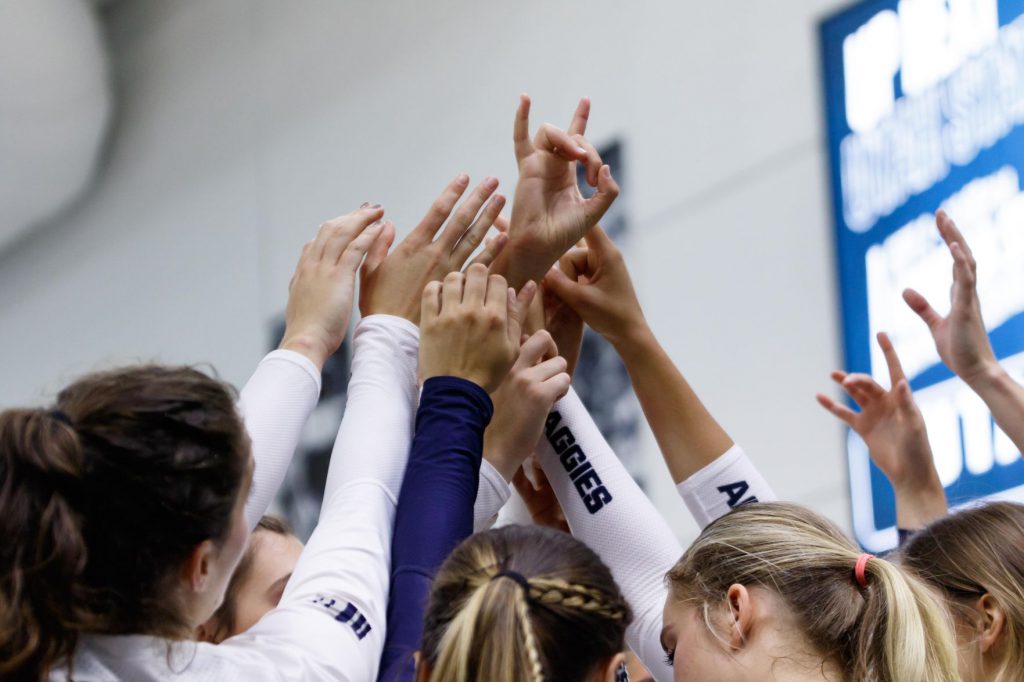 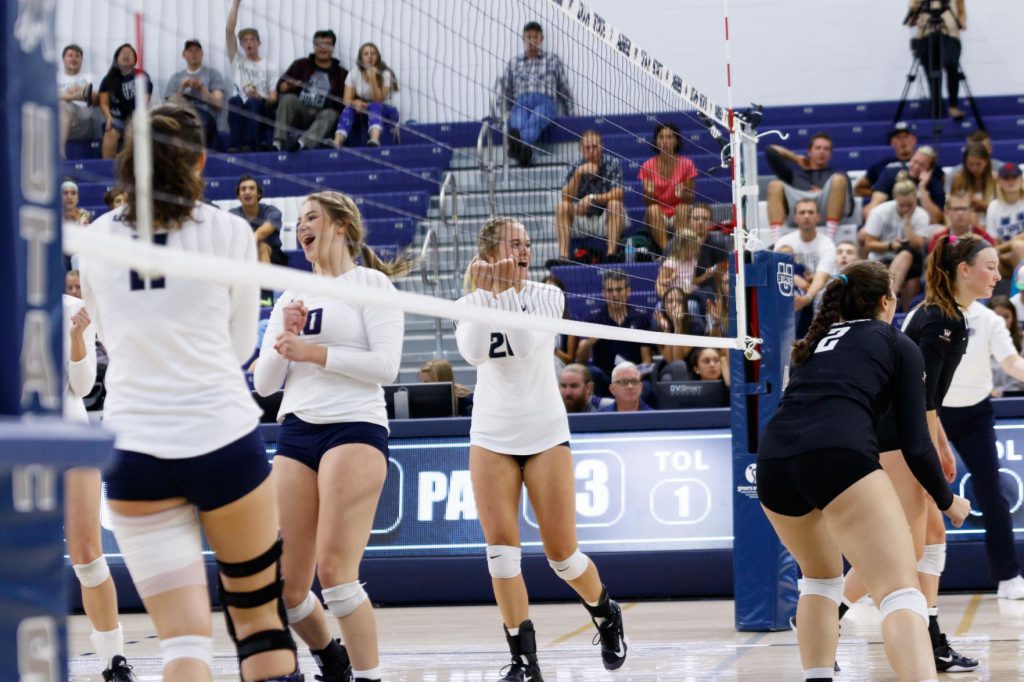 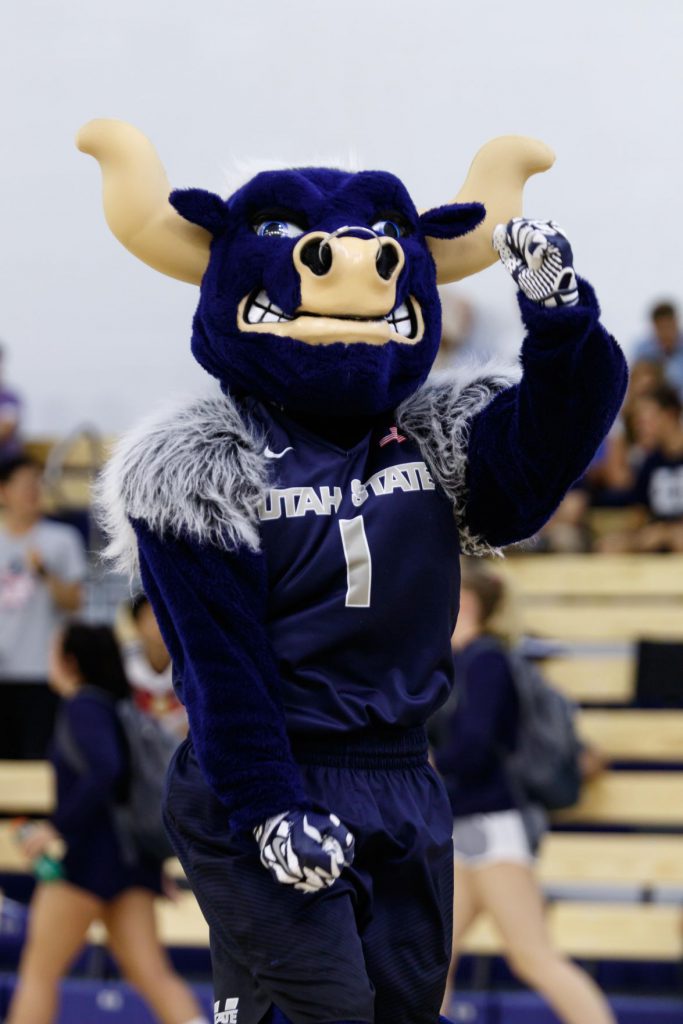 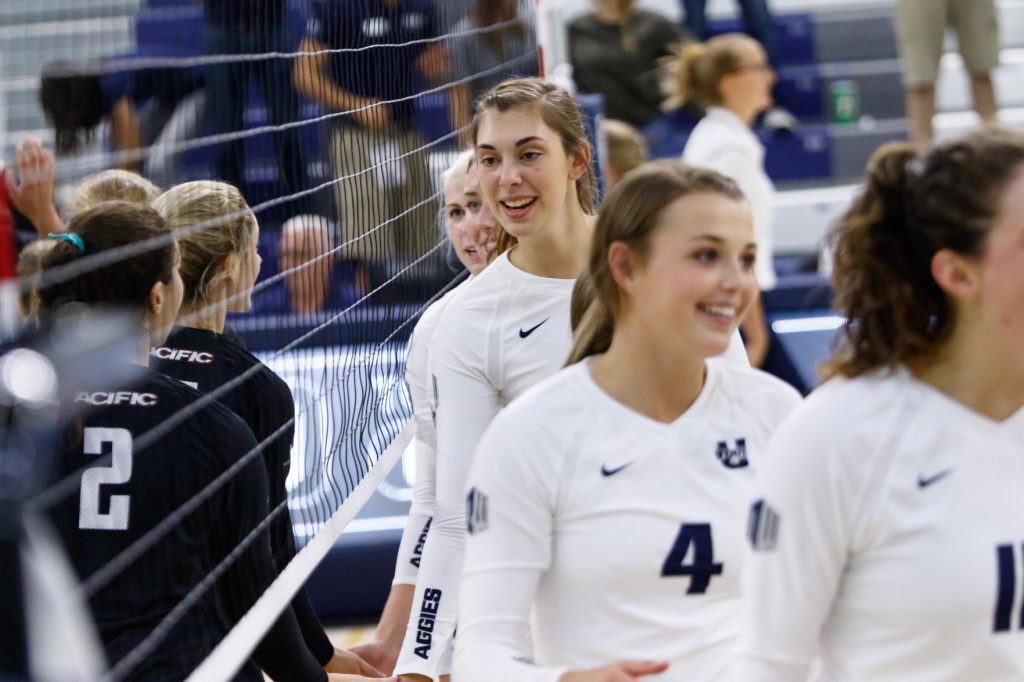