A car is submerged on a freeway flooded by Tropical Storm Harvey on Sunday, Aug. 27, 2017, near downtown Houston, Texas. The remnants of Hurricane Harvey sent devastating floods pouring into Houston on Sunday as rising water chased thousands of people to rooftops or higher ground. (AP Photo/Charlie Riedel)

LOGAN – About the same time Hurricane Harvey was devastating Houston, some staff members at U &amp; I RV were helping their kids get ready for a new school year. They couldn’t help but wonder how the affected kids in Texas were going to return to school and life as normal.

“There are so many other people giving clothes, food, water, shelter, stuff like that,” said Phil Drew, a sales manager at the company. “But what are the kids going to have for school? They are just starting school, especially in Houston, they had just started.”

The group decided to rally the community together to gather school supplies as part of a new campaign called, “Together, U &amp; I can make a difference.” According to Scott Kidman of U &amp; I RV, the campaign will go through the end of October, and will aim to gather 100,000 backpacks filled with school supplies.

“Our goal is to get all the basic school supplies in a backpack, so it’s like a kit,” Kidman said. “So when these supplies go down there it’s got the kit and everything they need.”

After the team began organizing the relief effort, Hurricane Irma began causing more destruction through the Caribbean. Kidman said they will try to help those areas too.

“There are no boundaries for who we’ll help,” he said.

The goal is to have large containers supplied by Darrell’s Appliance set up at locations around town. Members of the community are encouraged to donate at those locations. The current drop-off locations, which will be ready for donations Monday, include: Industrial Tool and Supply, A1 Auto, Cherry Peak Resort, Logan Dance Studio, MayMoes and U and I RV.

Kidman said he would like to invite all the businesses around town to participate in the effort. He is also working on getting a GoFundMe.com account running where people can make monetary donations.

Backpacks for boys and girls of all ages

Basic schools supplies of all kinds and for all ages. 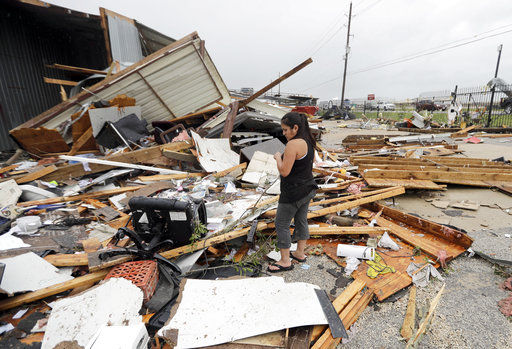 Jennifer Bryant looks over the debris from her family business destroyed by Hurricane Harvey Saturday, Aug. 26, 2017, in Katy, Texas. Harvey rolled over the Texas Gulf Coast on Saturday, smashing homes and businesses and lashing the shore with wind and rain so intense that drivers were forced off the road because they could not see in front of them. (AP Photo/David J. Phillip)