NEW YORK (AP) — Holding photos and reading names of loved ones lost 16 years ago, 9/11 victims’ relatives marked the anniversary of the attacks at ground zero on Monday with a solemn and personal ceremony.

About a thousand 9/11 family members, survivors, rescuers and officials were gathered as the ceremony at the World Trade Center began with a moment of silence and tolling bells. Then relatives began reading out the names of the nearly 3,000 people killed in the deadliest terror attack on American soil.

“I know you’re looking down at me with a big, big smile on your face,” Connor Murphy said through tears. He lost his father, Kevin James Murphy.

Sixteen years later, the quiet rhythms of commemoration have become customs: a recitation of all the names of the dead, moments of silence and tolling bells, and two powerful light beams that shine through the night.

Yet each ceremony also takes on personal touches. Over the years, some name-readers have added messages ranging from the universal (“the things we think separate us really don’t — we’re all part of this one Earth”) to the personal (“I love you and miss you. Go Packers!“).

The victims died when hijacked planes slammed into the trade center, the Pentagon and a field near Shanksville, Pennsylvania, on Sept. 11, 2001, hurling America into a new consciousness of the threat of global terrorism.

President Donald Trump, a native New Yorker observing the anniversary for the first time as the nation’s leader, observed a moment of silence at the White House with first lady Melania Trump.

The Trumps also planned to participate in a 9/11 observance at the Pentagon. Defense Secretary Jim Mattis and Gen. Joseph Dunford, chairman of the Joint Chiefs of Staff, are hosting a private observance for victims’ relatives there at 9:11 a.m. Monday. After the names are read at that ceremony, there’s a public observance, with a wreath-laying and remarks.

Vice President Mike Pence and U.S. Secretary of the Interior Ryan Zinke are scheduled to deliver remarks at the Flight 93 National Memorial near Shanksville. It’s on the rural field where one of the airliners crashed after passengers and crew fought to wrest control away from the terrorists who’d hijacked it and were heading for Washington.

Construction continues at the Shanksville memorial, where ground was broken Sunday for a 93-foot (28 meters) tall Tower of Voices to honor the 33 passengers and seven crew members who died.

The ceremony amid the waterfall pools and lines of trees on the National Sept. 11 Memorial plaza strives to be apolitical: Politicians can attend, but since 2011, they haven’t been allowed to read names or deliver remarks.

Yet last year’s 15th-anniversary ceremony became entangled in the narrative of a fractious presidential campaign when Democratic nominee Hillary Clinton left abruptly, stumbled into a van and ultimately revealed she’d been diagnosed days earlier with pneumonia.

The episode fed into questions that then-Republican-nominee Trump had repeatedly raised about Clinton’s stamina and transparency. She took three days off to recover, and Trump used footage of her stagger in a campaign ad.

Trump has often invoked his memories of 9/11 to highlight his hometown’s resilience and responders’ bravery. Some of his recollections have raised eyebrows, particularly remarks while talking about Muslims that “thousands of people were cheering” in Jersey City, New Jersey, as the towers fell. There is no evidence in news archives of mass celebrations by Muslims there.

Meanwhile, rebuilding and reimagining continues at ground zero. The third of four planned office towers is set to open next year; so is a Greek Orthodox church, next to the trade center site, that was crushed by the South Tower’s collapse. Work toward a $250 million performing arts center continues after a design was unveiled last fall.

Most recently, plans were announced this spring to transform a grassy clearing on the memorial plaza into a walkway and area dedicated to 9/11 rescue and recovery workers, including those who died of illnesses years after being exposed to smoke, dust and ash at ground zero. 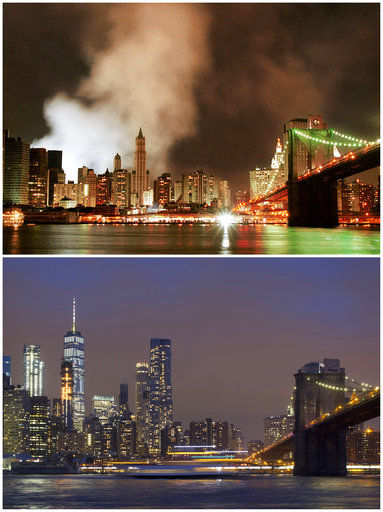 This photo combination shows smoke from the smoldering remains of the World Trade Center rising over the skyline of Lower Manhattan, above, on Sept. 16, 2001, following the September 11 terrorist attacks, and a view from the same location nearly 16 years later on Sept. 5, 2017, with One World Trade Center at left. The Brooklyn Bridge is at right in both frames. (AP Photo/Mark Lennihan) 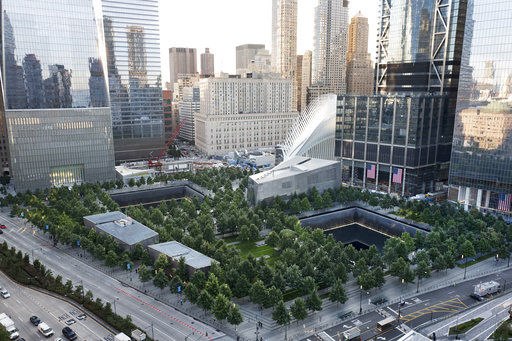 The National September 11 Memorial and Museum are set for a memorial service, Monday, Sept. 11, 2017, in New York. Thousands of 9/11 victims' relatives, survivors, rescuers and others are expected to gather Monday at the World Trade Center to remember the deadliest terror attack on American soil. Nearly 3,000 people died when hijacked planes slammed into the trade center, the Pentagon and a field near Shanksville, Pa., on Sept. 11, 2001. (AP Photo/Mark Lennihan) 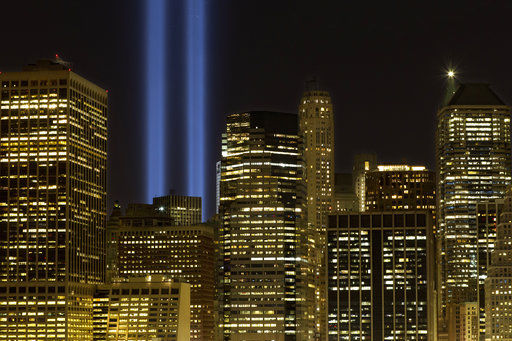 The Tribute in Light rises above the lower Manhattan skyline, Sunday, Sept. 10, 2017, in New York. The two blue pillars of light provide a visual reminder of how the Twin Towers, destroyed in the terrorist attacks of Sept. 11, 2001, once stood above the city skyline. (AP Photo/Mark Lennihan)