National anthem singer Rico Lavelle bends to his knee, bows his head and raises his fist after singing the anthem before the first half of an NFL football game between the Detroit Lions and the Atlanta Falcons, Sunday, Sept. 24, 2017, in Detroit. (AP Photo/Carlos Osorio)

President Donald Trump’s criticism of players who kneel during the national anthem sparked angry protests around the National Football League Sunday, as about 200 players sat, knelt or raised their fists in defiance.

Most NFL players on Sunday locked arms with their teammates — some standing, others kneeling — in a show of solidarity. A handful of teams stayed off the field until after “The Star-Spangled Banner” to avoid the issue altogether.

As he prepared to board Air Force One to return to Washington from New Jersey, Trump said the players protesting the anthem were “very disrespectful to our country” and called again on owners to stop what he considers unpatriotic displays in America’s most popular sport.

The president’s attack on athletes turned the anthems — usually sung during commercials — into must-watch television shown live by the networks and Yahoo!, which streamed the game in London<a href=”http://pro32.ap.org/article/some-fans-boo-anthem-protests-2″ target=”&mdash;blank”>. In some NFL stadiums, crowds booed or yelled at players to stand.</a> There was also some applause.

The <a href=”https://apnews.com/card/afs:Card:1394080058/Photo-Gallery” target=”&mdash;blank”>NFL and its players, often at odds, used Sunday’s anthems to show unity.</a> One of Trump’s biggest supporters in the NFL, Patriots owner Robert Kraft, joined the chorus when he expressed “deep disappointment” with Trump.

“I like Bob very much. He’s my friend. He gave me a Super Bowl ring a month ago. So he’s a good friend of mine and I want him to do what he wants to do,” Trump said. “… We have great people representing our country, especially our soldiers our first responders and they should be treated with respect.

“And when you get on your knee and you don’t respect the American flag or the anthem.”

The protests started more than a year ago when former San Francisco 49ers quarterback Colin Kaepernick refused to stand during the anthem as a protest of police treatment of minorities. This season, no team has signed him, and some supporters believe NFL owners are avoiding him because of the controversy.

A handful of white players didn’t stand Sunday, but the vast majority of those actively protesting were black.

Defensive star <a href=”https://pbs.twimg.com/media/DKgVw1QW4AAD7Uy.jpg” target=”&mdash;blank”>Von Miller</a> was among the large group of Denver Broncos who took a knee in Buffalo Sunday, where Bills running back LeSean McCoy stretched during the anthem.

“We felt like President Trump’s speech was an assault on our most cherished right, freedom of speech,” said Miller, who normally steers clear of politics and social issues.

Dozens of more players protested before the Raiders-Redskins game, the final one of the day and not far from the White House in Landover, Maryland. All but a handful of Raiders sat on their bench and seven Redskins took a knee while their teammates stood arm-in-arm along with owner Dan Snyder and president Bruce Allen.

In Chicago, the Pittsburgh Steelers stayed in the tunnel except for one player, Army veteran Alejandro Villanueva, who stood outside with a hand over his heart. Both the <a href=”https://twitter.com/FOXSports/status/912054152858976256″ target=”&mdash;blank”>Seahawks and Titans stayed inside</a> until after the national anthem was over in Nashville, a throwback to the pre-2009 NFL when teams, not the league, set pre-game policy regarding players standing on the sideline for the anthem.

A handful of NFL players had been continuing Kaepernick’s protest this season, but that ballooned Sunday following Trump’s two-day weekend rant. It began with the president calling for NFL protesters to be fired and continued Saturday when he rescinded a White House invitation for the NBA champion Golden State Warriors over star Stephen Curry’s criticism.

The president’s delving into the NFL protests started by <a href=”http://pro32.ap.org/article/kaepernick-donates-50k-meals-wheels-after-trump-swipe” target=”&mdash;blank”>Kaepernick</a> brought new attention and angered many players who took one insult as a personal attack on their mothers.

“Wouldn’t you love to see one of these NFL owners, when somebody disrespects our flag, you’d say, ‘Get that son of a bitch off the field right now. Out! He’s fired,'” Trump said to loud applause Friday night at a rally in Huntsville, Alabama.

Super Bowl MVP Tom Brady was among the New England Patriots who locked arms in solidarity in Foxborough, Massachusetts. Aaron Rodgers did the same with his teammates in Green Bay.

In Detroit, <a href=”https://twitter.com/SInow/status/912001508744601600″ target=”&mdash;blank”>anthem singer Rico Lavelle took a knee</a> at the word “brave,” lowering his head and raising his right fist. In Nashville, anthem singer Meghan Linsey, took a knee as she finished singing.

Jets Chairman and CEO Christopher Johnson, whose brother, Woody, is the ambassador to England and one of Trump’s most ardent supporters, called it “an honor and a privilege to stand arm-in-arm unified with our players during today’s national anthem” in East Rutherford, New Jersey.

The issue reverberated across the Atlantic, where about two dozen players took a knee during the playing of the U.S. anthem at Wembley Stadium.

Jaguars owner Shad Khan and players on both teams who were not kneeling remained locked arm-in-arm throughout the playing of the anthem and “God Save The Queen.” No players knelt during the British anthem.

“Me taking a knee doesn’t change the fact that I support our military, I’m a patriot and I love my country,” Bills linebacker Lorenzo Alexander said. “But I also recognize there are some social injustices in this country and today I wanted to take a knee in support of my brothers who have been doing it.”

Alexander said he’ll go back to standing for the anthem next week.

“I just wanted to show them that I was with them today, especially in the backdrop of our president making the comments about our players, about their mothers,” Alexander said. “And then you put that in conjunction with how he tried to gray-area Nazism and KKK members as being fine people, I had to take a knee.”

The National Hockey League’s reigning champion Pittsburgh Penguins announced Sunday they’ve accepted a White House invitation from Trump. The Penguins said they respect the office of the president and “the long tradition of championship team visiting the White House.”

Before Game 1 of the WNBA Finals in Minneapolis on Sunday, the Los Angeles Sparks left the floor while the Minnesota Lynx stood arm-in-arm. The Sparks returned to a chorus of boos when the song was finished.

Trump also mocked the league’s crackdown on illegal hits, suggesting the league had softened because of its safety initiatives.

Kahn, who was among the NFL owners who chipped in $1 million to the Trump inauguration committee, said he met with his team captains before kickoff in London “to express my support for them, all NFL players and the league following the divisive and contentious remarks made by President Trump.”

Among the strongest criticisms of the president Sunday was this from Saints coach Sean Payton: “I’m disappointed in the comments that were made. I think we need a little bit more wisdom in that office,” he said of the White House. “I want that guy to be one of the smarter guys in the room and it seems like every time he’s opening up his mouth it’s something that is dividing our country and not pulling us together.” 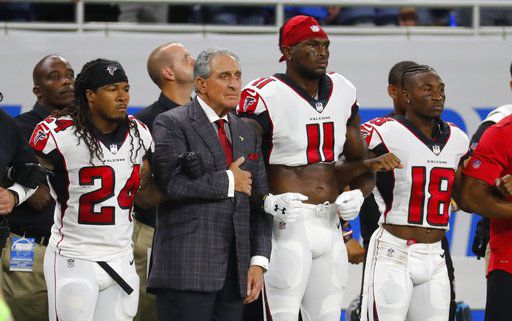 Atlanta Falcons owner Arthur Blank stands with his players during the national anthem before an NFL football game against the Detroit Lions, Sunday, Sept. 24, 2017, in Detroit. (AP Photo/Rick Osentoski) Baltimore Ravens head coach John Harbaugh, second from left, links arms with his daughter Alison, left, and players during the playing of the U.S. national anthem before an NFL football game against the Jacksonville Jaguars at Wembley Stadium in London, Sunday Sept. 24, 2017. (AP Photo/Matt Dunham) 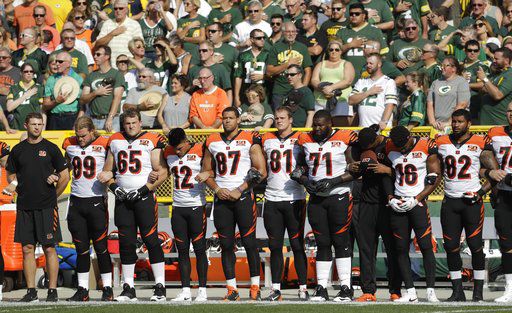 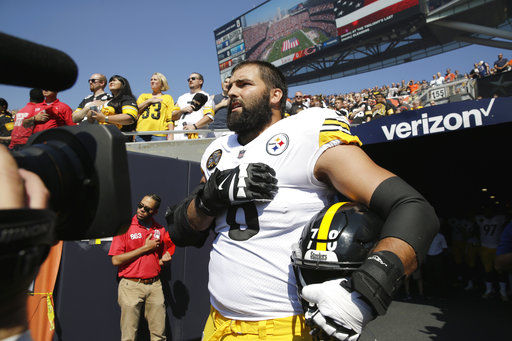 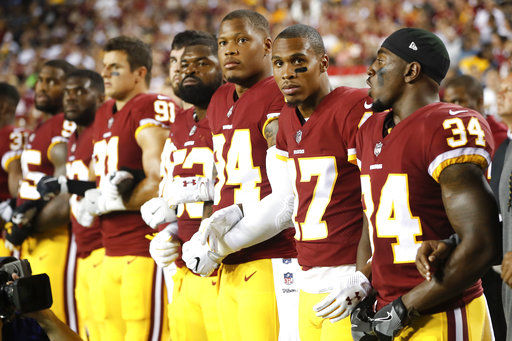 Member of the Washington Redskins stand arm in arm during the playing of the National Anthem before an NFL football game against the Oakland Raiders in Landover, Md., Sunday, Sept. 24, 2017. (AP Photo/Pablo Martinez Monsivais) 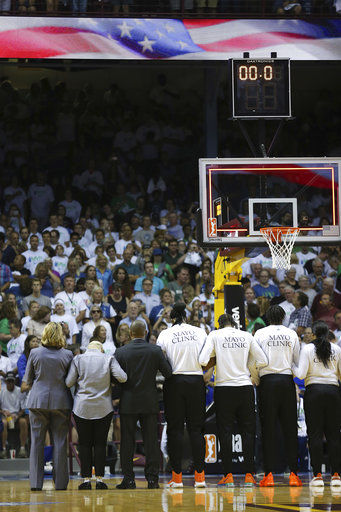 Minnesota Lynx players and coaches link arms during the national anthem prior to Game 1 in the WNBA basketball final against the Los Angeles Sparks, Sunday, Sept. 24, 2017, in Minneapolis. (AP Photo/Stacy Bengs) 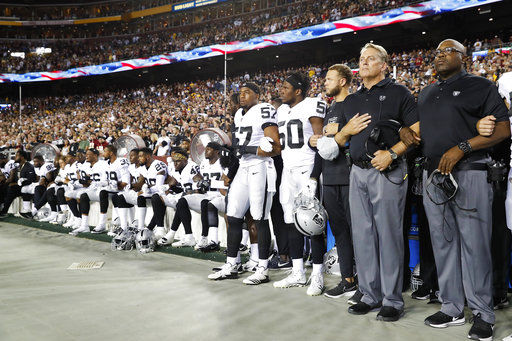 Some members of the Oakland Raiders sit on the bench during the national anthem before an NFL football game against the Washington Redskins in Landover, Md., Sunday, Sept. 24, 2017. (AP Photo/Alex Brandon) 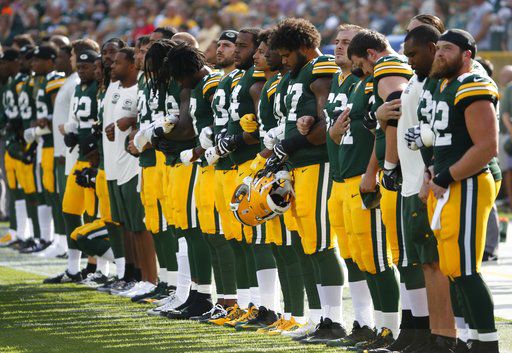 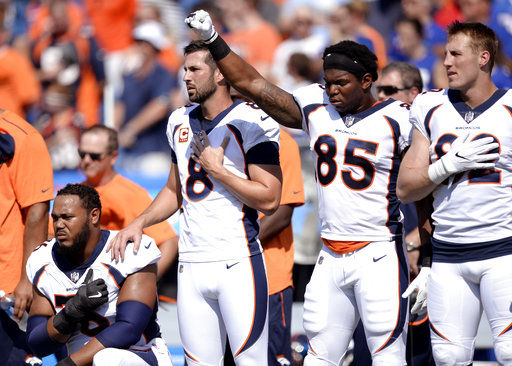 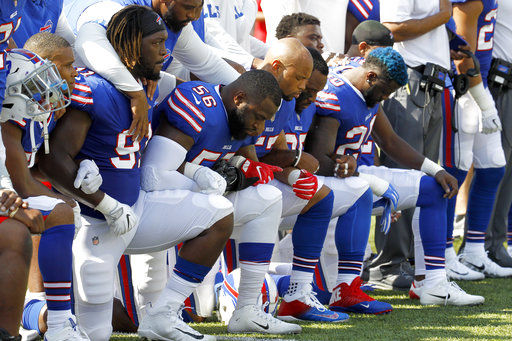 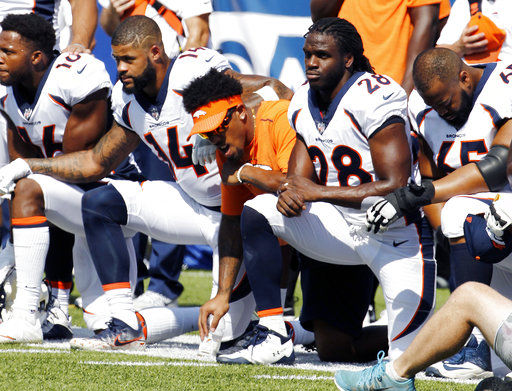 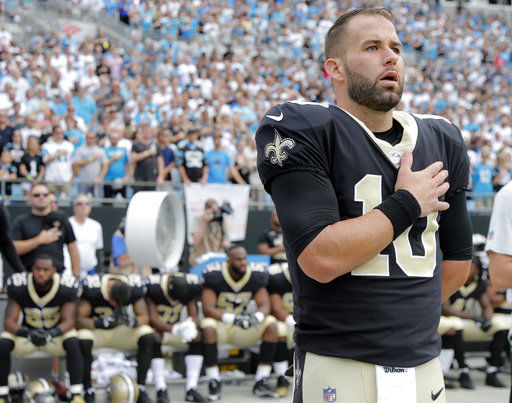 New Orleans Saints quarterback Chase Daniel (10) stands with his hand over his heart during the national anthem as other Saints players sit on the bench before an NFL football game against the Carolina Panthers in Charlotte, N.C., Sunday, Sept. 24, 2017. (AP Photo/Bob Leverone) 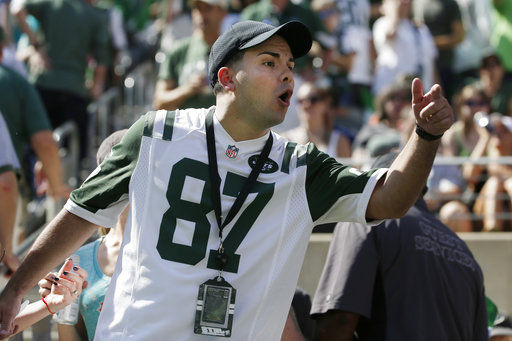 A New York Jets fan yells at a player during the playing of the national anthem before an NFL football game Sunday, Sept. 24, 2017, in East Rutherford, N.J. (AP Photo/Seth Wenig)