SALT LAKE CITY (AP) — A foundation that runs venues from the 2002 Winter Olympics in the Salt Lake City area needs $39 million over the next decade for infrastructure improvements that would put the city in position to make a bid for a future Olympics in 2026 or 2030, according to a new state audit made public Tuesday.

The Utah Legislature’s auditor recommended that state lawmakers consider taxpayer funded options because the Utah Olympic Legacy Foundation loses about $4 million yearly operating facilities that include a speed skating oval, ski jump and bobsled tracks. Those losses are currently covered by interest that comes from a $76 million fund created after the games.

The audit was released a day after state officials announced the formation of an exploratory committee to prepare for a possible new Olympic bid.

The cost estimate of the repairs is not an estimate of what it would cost to host another Olympics.

The city had previously estimated it could put on a Winter Olympics for about $2 billion, but the exploratory committee will come up with a new cost estimate before it completes its report by February of next year.

The U.S. Olympic Committee board said last week it’s interested in trying to bring the Winter Olympics to the U.S. in 2026 or 2030. The committee has until next March to pick a city. U.S. cities that have expressed interest so far also include Denver and Reno, Nevada.

Utah legislative leaders requested the audit to gauge the state of Utah’s Olympic venues in the Salt Lake City area and in and around the ski town of Park City.

The report found that roads and equipment at the sites need major repairs because the 2002 Games were held 15 years ago. The sports facilities also need improvements to make them up to date.

The repairs include $5 million for retaining walls at the bobsled track, $2.3 million for asphalt and guardrails at the Utah Olympic Park in Park City, and a $1.75 million roof replacement at the speed skating oval in the Salt Lake City of Kearns.

The audit lays out several options for how the state could fund the improvements, and noted that the state funded an initial $59 million for the construction of venues in the lead up to the bid for the 2002 Games. It was paid back by the Salt Lake Organizing Committee after the Olympics ended.

The $39.3 million would work out to roughly $4 million a year over a decade.

Utah’s state budget was $16.2 billion this year, but finding money for the project without cutting elsewhere could make it tricky to fund the improvements.

The Olympics improvements would have to compete with numerous projects and needs, including public school buildings.

Two of the highest-ranking state legislators — House Speaker Greg Hughes and Senate President Wayne Niederhauser — backed the idea of finding a way to help with the funds during a hearing about the audit.

Niederhauser, who is one of three co-chairs of the new Olympic exploratory committee, said the improvements would help augment Utah’s reputation of being a top winter sports city in the U.S.

“As everybody knows, there’s a possibility of attracting the Olympics again. But even if not, this is Utah’s brand,” said Niederhauser, a Republican. “We need to make sure these faciliites are up to date and maintained well.”

Rep. Brian King, a Democrat, said his gut tells him the money would be a sound investment. But he requested a future analysis to determine what economic benefits Utah could get by improving the venues and being a future host of the Winter Olympics.

“What kind of a return on investment are we’re going to see if we plow $40 million dollars over the next 10 years into this?” King said.

U.S. Olympic Committee board said Friday that it was moving forward with discussions about bringing the Winter Games to the U.S. for either 2026 or 2030. Because Los Angeles was recently awarded the 2028 Summer Games, a bid for 2030 would make more sense, chairman Larry Probst said Friday.

Innsbruck, Austria, said Sunday it would not bid for the 2026 Winter Olympics, taking one more city out of the running. The hosting rights are set to be awarded in July 2019.

The same country hasn’t hosted back-to-back Olympics since before World War II, though when the International Olympic Committee scrapped its traditional rules and awarded 2024 (Paris) and 2028 (Los Angeles) at the same time, it indicated it was certainly open to new ideas.

Since 2012, Salt Lake City has been letting Olympic officials know the city was ready and willing to host again with a plan based on renovating and upgrading venues that have been in use since the Games ended. 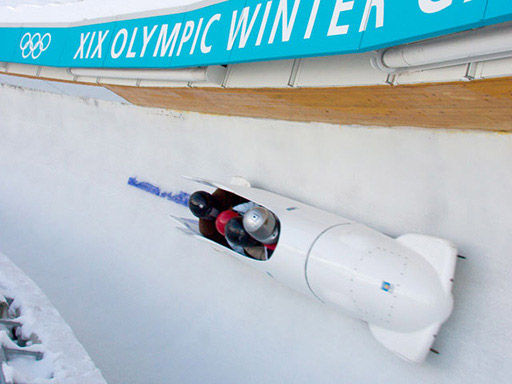