Hundreds of thousands of people in Puerto Rico are still without running water after Hurricane Maria struck last month. Some of the island’s 51 sewage treatment plants remain out of service.

Numerous employees of JBS in Hyrum have family in Puerto Rico and have been anxious about the clean up efforts in the American territory. JBS also has facilities on the island.

According to a press release, JBS employees in Hyrum wanted to do something to help their family members and others affected by the devastating hurricane.

“Some of the employees came directly from working on the line to sing or play the drums,” Bradfield says in a release. “By the end of the day we raised almost $600. It was touching to see so many employees volunteer and donate to help the friends and families of others.”

The JBS plant management in Hyrum matched the donations, raising the total amount of money raised to $1,200.

The money is being spent on water filtration systems that can clean up to 1,000 gallons of water, helping more than 40 families with potable water. 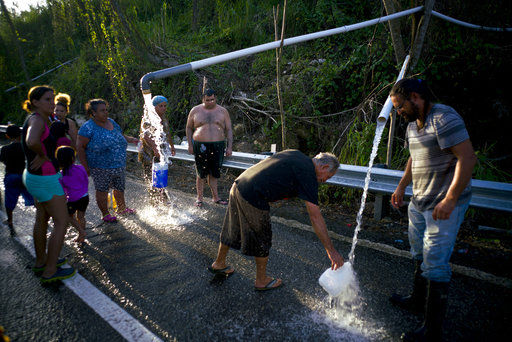 In this Saturday, Oct. 14 2017 photo, people affected by Hurricane Maria collect water and while others bathe in water piped from a mountain creek, in Utuado, Puerto Rico. Nearly a month after the Hurricane Maria made landfall, hundreds of thousands of people are still without running water, and 20 of the island’s 51 sewage treatment plants are out of service. (AP Photo/Ramon Espinosa)