HOUSTON (AP) — James Harden scored a career-high 56 points and added 13 assists in just 35 minutes to lead the Houston Rockets to a 137-110 victory over the Utah Jazz on Sunday night.

Harden finished 19 of 25 from the field after missing his last three attempts. The MVP runner-up was a perfect 7 for 7 from beyond the arc until he missed a step-back 3-pointer midway through the fourth quarter as the shot clock was about to expire.

Even when the Jazz could deny Harden his shot, he dished it off for someone else to score. Eric Gordon scored 20 points, Trevor Ariza had 14 and Nene scored 13 off the bench.

Harden received a standing ovation from the Toyota Center crowd, which rained down “MVP! MVP!” chants at multiple points during the game. He had 22 points in both the first and third quarters, 30 at halftime and sat for the final 7:32 of the blowout.

Donovan Mitchell led Utah with 17 points in 25 minutes off the bench. All five Jazz starters scored in double figures, led by Rudy Gobert, who had 13. Derrick Favors and Rodney Hood both had 12, Joe Ingles had 11, and Ricky Rubio added 10. Gobert was held to a season-low five rebounds in 25 minutes.

The Rockets have won three straight, while the Jazz have lost back-to-back games following a three-game winning streak.

Houston scored at least 119 points for a third straight game. Last season, the Rockets were 43-5 when scoring 110 points or more and 12-22 when failing to do so.

Jazz: Gobert received a technical foul late in the first half for shouting at an official following a dunk. . Alec Burks scored 10 points in 23 minutes off the bench. . The Jazz shot 43.7 percent from the field, including 38.2 percent from 3-point range.

Rockets: Clint Capela had eight points, eight rebounds and four blocks, including two on Gobert. . Houston made 59.3 percent of its shots, including 59 percent from beyond the 3-point line on 23-of-39 shooting. 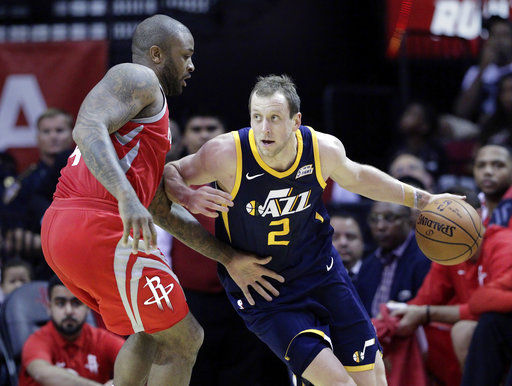 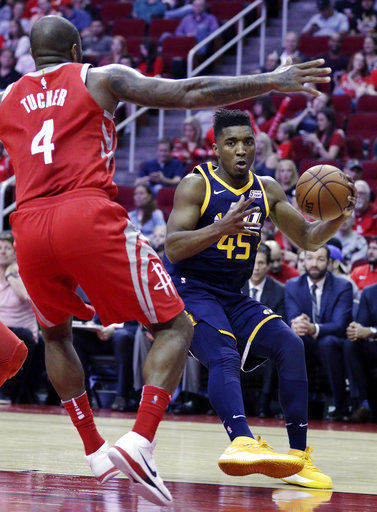