SALT LAKE CITY (AP) — Donovan Mitchell scored 26 points, including four in the final minute, to lead the Utah Jazz to a 114-106 win over the Brooklyn Nets on Saturday night.

Without Rudy Gobert, who sat with a bruised knee, Derrick Favors had season highs of 24 points and 12 rebounds and the Jazz snapped their four-game losing streak.

After trailing by 12 with 3:52 to play, DeMarre Carroll led a last-gasp comeback with six quick points to pull Brooklyn to 108-104, but Mitchell hit two free throws and had a sensational tip-in to clinch the victory.

The Jazz have been one of the few holdouts in the new small-ball era in the NBA, as they usually feature two non-stretch big players. With Gobert sidelined, Utah often had just one interior player on the floor and it worked.

It also didn’t hurt that the Nets were finishing a five-game road trip and a back-to-back.

D’Angelo Russell scored 26 points for the Nets but limped to the locker room with 2:35 to play and did not return. Rondae Hollis-Jefferson had 19 points and Carroll finished with 15.

The Nets led 25-20 in first quarter before the Jazz went on the kind of burst they’ve seldom managed this season. Hood broke out of a recent shooting slump with 14 points in a Utah’s 25-4 run.

Hood, who had shot just 27 percent in his last five games, made a 3-pointer with 7:58 before halftime that gave the Jazz a 45-29 advantage.

Mitchell also bounced back from going 8 for 35 in his last two games to shoot 10 for 18 and come up big in the clutch.

The Nets lost three of five on their trip.

Nets: Trevor Booker returned after missing four games with a sore lower back and supplied his typical intensity, scoring 12 points and picking up a technical in the second quarter. … Coach Kenny Atkinson said before the game, “We’ve won a couple of road games, and now the next step is, can we perform better on a back-to-back. We’ll see.” … The Nets still haven’t won consecutive road games since the 2015-16 season.

Jazz: After Friday’s game, Gobert tweeted a video of the play, saying, “Dove for the ball right…” and also told reporters he thought Dion Waiters crashing into his knee was a dirty play. … The Jazz haven’t topped the 50-percent mark for field goal percentage in a game since the opener against Denver but came close with a 48.2 percent.

Jazz: Host the Timberwolves on Monday for their eighth home game in their last nine. 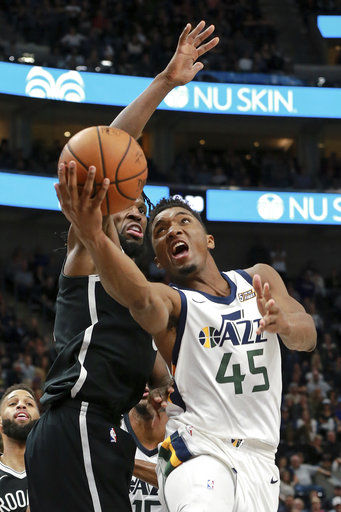 Utah Jazz guard Donovan Mitchell (45) gets past Brooklyn Nets forward DeMarre Carroll (9) and lays the ball up to the basket during the fourth quarter of NBA basketball game Saturday, Nov. 11, 2017, in Salt Lake City. The Jazz won 114-106. (AP Photo/Chris Nicoll) 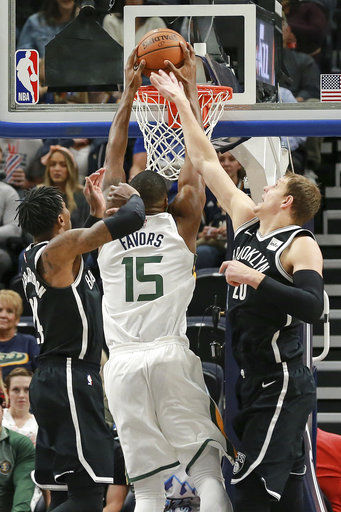