Utah Jazz guard Ricky Rubio (3) brings the ball up court in the second half during an NBA basketball game against the Denver Nuggets Tuesday, Nov. 28, 2017, in Salt Lake City. (AP Photo/Rick Bowmer)

SALT LAKE CITY (AP) — Derrick Favors hasn’t been shy about wanting to prove himself to the world after injuries derailed his last two seasons. The Utah Jazz big man took advantage of a national television audience to do exactly that.

Favors scored 24 points, and the Jazz used a dominant second half to pull away from the Denver Nuggets for a 106-77 victory Tuesday night.

“I just wanted, basically, to come out and show everybody I’m back,” Favors said. “I’m 100 percent healthy now. Just come out and play my game. Be aggressive offensively and defensively.

“I know everybody was kind of basing my whole career off of last year when I was injured and wasn’t moving right. I just want to show everybody I’m back to who I was before I got hurt.”

The Jazz opened the third quarter with a 20-6 run, and Denver never recovered. The Nuggets got a little loose with the ball after halftime and turned over the ball seven times in the third. The Jazz defense was more active and the Nuggets went cold from the field while Utah shot 52.6 percent from the field in the quarter.

The Jazz outscored the Nuggets 58-28 in the second half.

“That was a really good defensive effort for us, especially in the second half,” Jazz coach Quin Snyder said. “Our habits are getting better. That’s a credit to the work that they’ve been doing and the focus they’ve been giving.

“The biggest thing defensively in the second half was we secured the defensive glass better. They had 10 offensive rebounds at halftime. It’s tough when you work hard and you get a stop and they get an offensive rebound.”

Favors outplayed Nikola Jokic on both ends of the floor and his aggressiveness on offense helped finish off the victory. He also had nine rebounds, five assists and three blocks.

Without Rudy Gobert, Rodney Hood and Joe Johnson, the Jazz got a group effort, with Mitchell, Jerebko and Rubio also coming up with big plays.

Gary Harris scored 14 of his 18 points for Denver in the first half, and Kenneth Faried had 11 points and eight rebounds.

“Got our (butt) kicked,” Nuggets coach Michael Malone said. “It’s simply put. They turned it up, they got into us, they were physical. They turned us over, they dominated the offensive glass. They did whatever they wanted. We were completely out played.

“For 20 games now turnovers have been an issue and not surprisingly an issue tonight. … So just an awful embarrassing night for the Denver Nuggets.”

Jokic added, “They just turned it up to another level and we weren’t even close.”

Nuggets: Wilson Chandler did not play due to a lower back injury. Faried made his second start of the season in his place. Malone called Chandler day to day.

Jazz: Hood did not play due to left ankle soreness. Snyder said the injury has been gradually getting worse and the team has been monitoring it. … Mitchell became the second player in franchise history to score 300 points in his first 21 games. Darrell Griffith was the first in 1980-81.

Nuggets forward Paul Millsap is out after having surgery on his left wrist. Malone explained the difference of having Faried on the floor more with Jokic.

“He and Kenneth have such great chemistry because Kenneth runs the floor and puts pressure on the rim,” Malone said. “If he’s not at the rim, he’s working the baseline. Now you have Nikola up high post, elbow, making plays for everybody.

“That was the challenge early in the season with Paul Millsap and Nikola, we had five guys on the perimeter quite a bit. Didn’t have anybody putting pressure on the rim. When you have somebody putting pressure on the rim, that forces somebody to account for that man. And therein lies an open man somewhere, and that’s where Nikola’s at his best. He finds the open man time and time again.” 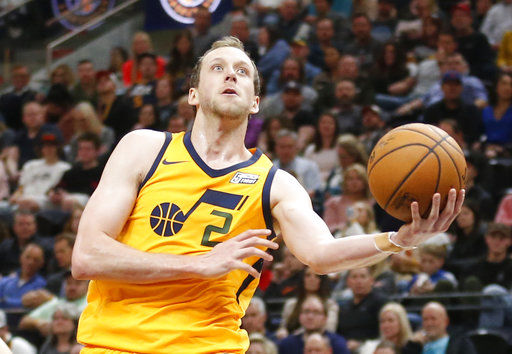 Utah Jazz forward Joe Ingles (2) lays the ball up in the second half during an NBA basketball game against the Denver Nuggets Tuesday, Nov. 28, 2017, in Salt Lake City. (AP Photo/Rick Bowmer) 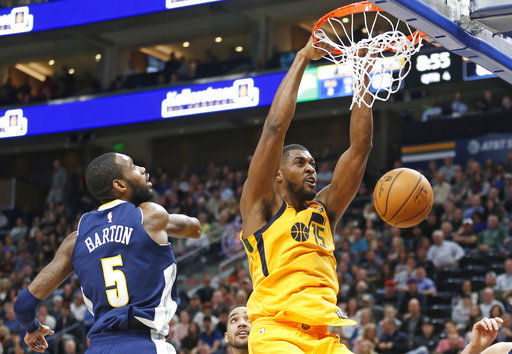 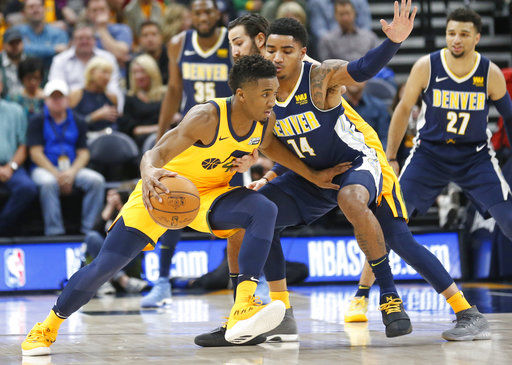 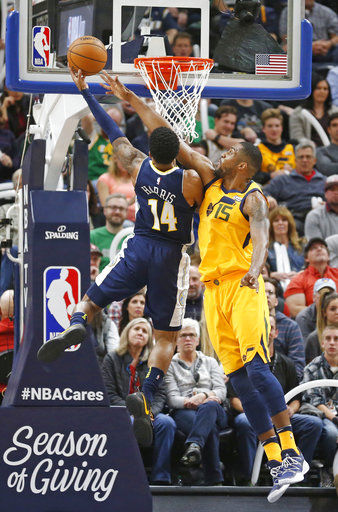