LOS ANGELES (AP) — The Utah Jazz had seven players score in double figures, going on a 21-4 run in the fourth quarter to run away from the Los Angeles Clippers 126-107 on Thursday night.

Austin Rivers led the Clippers with 25 points, and Lou Williams had 20.

The Clippers trailed 94-93 early in the fourth quarter before Utah took command. The Jazz outscored the Clippers 32-20 in the final period.

The Clippers were playing without four starters. Lone regular starter DeAndre Jordan finished with eight points and a game-high 16 rebounds.

The Clippers lost despite shooting 54.3 percent and outrebounding the Jazz 36-33.

Depth hurt the Clippers, whose reserves were outscored 49-30 by the Jazz.

Jazz: With Hood out with left ankle soreness, Utah listed four players out on their daily injury report — Gobert (tibia contusion), Joe Johnson (wrist tendon instability) and Dante Exum and (shoulder surgery). Said coach Quin Snyder: “We’ve got our work cut out for us, there’s no secret there. You may not be able to push through at a high level in terms of wins and losses, but you just compete. That’s all you can do.”

Clippers: The Clippers’ injury situation is even worse. They are down four starters — Blake Griffin (MCL sprain), Patrick Beverley (knee surgery), Danilo Gallinari (sprained ankle) and Milos Teodosic (plantar fascia). Said coach Doc Rivers: “Everybody just needs to do their job, play their role. The games won’t be 30-30, I guarantee you. Someone’s going to make some shots.”

Jazz: Return home Friday to play the Pelicans. They are 18-8 all-time in Salt Lake City against the Pelicans.

Clippers: Will travel to Dallas on Saturday to meet the Mavericks. Have won eight of last 12 vs. Dallas. 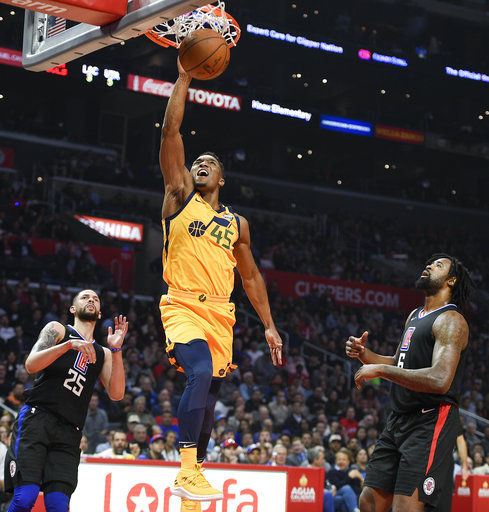 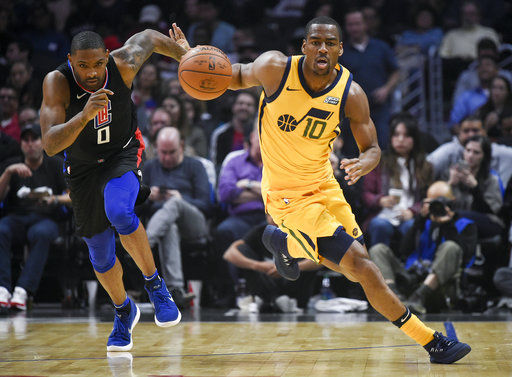 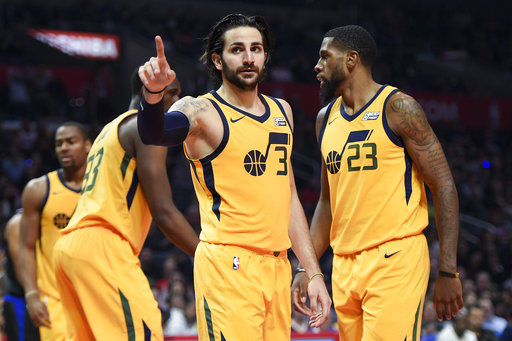 Utah Jazz guard Ricky Rubio, center, reacts to an out-of-bounds call as forward Royce O'Neale, right, turns away during the second half of an NBA basketball game against the Los Angeles Clippers in Los Angeles, Thursday, Nov. 30, 2017. The Jazz won 126-107. (AP Photo/Kelvin Kuo)