OKLAHOMA CITY (AP) — With all the excitement about the Oklahoma City Thunder’s new Big Three this season, Steven Adams had become a bit of an afterthought.

Not anymore. The 7-foot center had 20 points and nine rebounds to support Russell Westbrook’s triple-double, and the Thunder defeated the Utah Jazz 100-94 on Tuesday night.

The Thunder have won three straight, and Adams’ offensive play has been critical. During the streak, he has averaged 22 points and 8.3 rebounds and made 28 of 34 shots from the field.

The two new stars did their parts, too — Paul George scored 11 of his 21 points in the fourth quarter and Carmelo Anthony added 14 points and eight rebounds. They also opened things up for Adams, and now, teams have been forced to decide whether to focus on Adams or on George and Anthony, two of the league’s most capable scorers.

“The reason why Steven is doing what he’s going is because of Carmelo Anthony and Paul George,” Thunder coach Billy Donovan said. “When we’re patient on offense, Steven’s going to get those opportunities. Steven’s not doing really anything different from maybe he’s done in the past.”

Westbrook finished with 34 points, 14 assists and 13 rebounds to register his seventh triple-double of the season. Oklahoma City outscored the Jazz 32-14 in the fourth quarter to complete a rally from 17 points down in the third.

Rookie Donovan Mitchell scored 31 points and Joe Ingles added 16 for the Jazz, who had won six straight and scored at least 106 points in each game.

The Jazz led 47-39 at halftime, and they opened things up even more early in the third quarter. A driving layup by Alec Burks put the Jazz up 72-55 as the Thunder continued to misfire on open shots.

Westbrook closed out the third quarter strong and helped the Thunder cut Utah’s lead to 80-68 by the end of the period. He scored 11 points in the quarter.

“Russell Westbrook, the MVP of the league, got going,” Utah coach Quin Snyder said. “I thought in the third quarter, he gave them a lot of energy and gave them points.”

Oklahoma City cut the deficit to six points early in the final period before Westbrook re-entered the game after a brief rest. The Thunder finally took the lead on a layup by Westbrook with about four minutes remaining.

Adams didn’t put up big numbers late in the game, but he made a critical tip-in with 43.2 seconds left to put the Thunder up five.

Oklahoma City’s defense — statistically one of the league’s best — tightened up late in the game. Utah shot 30 percent in the fourth quarter.

The Thunder now have won three straight close games after making a habit of losing them.

“We stayed with it,” Westbrook said. “Teams are going to make runs. It’s about what you do when you get hit in the mouth. We learned our lesson, and we know that we have to continue to fight, and we did that tonight.”

George and Anthony combined to score 19 of their 35 points in the fourth quarter. Westbrook had six points, five rebounds and four assists in the final period.

Donovan, on how the Thunder played in the first half: “We played hurried, we played rushed, we played like we were down by 20 points with five minutes to go in the game. That’s the way we played the first half. Without question, from start to finish, I thought our defense gave us a chance tonight. We were very lucky in my opinion to only be down eight at the half. We could’ve been down drastically more.”

Thunder: Play at Brooklyn on Thursday. 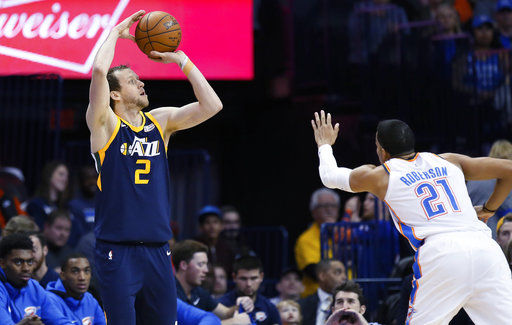 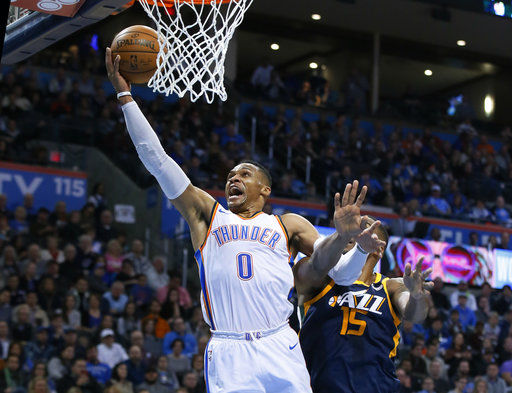 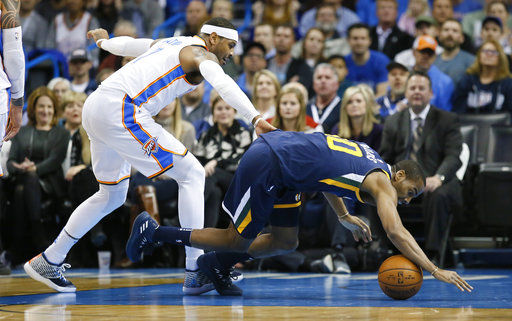 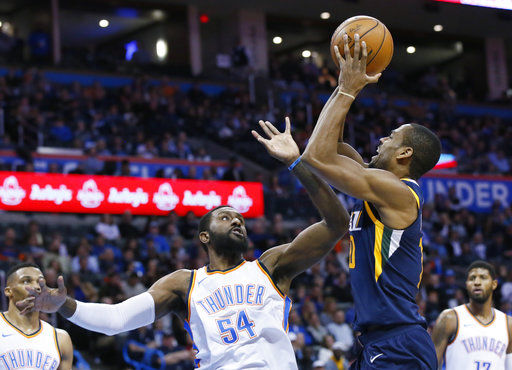