Chris Paul added 18 points, 13 assists and nine rebounds for the Rockets. Houston (19-4) won its eighth straight game and for the 14th time in 15. The Rockets improved to 8-0 with Paul in the lineup.

Utah played from behind throughout much of the first half after struggling with turnovers and erratic shooting. The Jazz turned it over eight times before halftime, leading to several key baskets for the Rockets.

Houston surged in front after Rudy Gobert committed back-to-back turnovers less than 2 minutes into the first quarter. Utah rallied twice to take the lead, but both runs were answered with bigger ones from the Rockets.

The Jazz went ahead 16-15 after back-to-back baskets from Joe Ingles and Sefolosha keyed a 6-0 run. Anderson cut to the basket for a dunk to kickstart a 7-0 run the other way and capped it off with a putback layup.

Utah ripped off an 11-2 run midway through the second quarter. Sefolosha bookended the spurt with a step-back jumper and go-ahead 3-pointer that gave the Jazz a 36-34 lead.

Trevor Ariza turned steals into baskets on back-to-back possessions to ignite a 10-0 run that put Houston back in front. The Rockets took a 44-36 lead and carried that momentum into the third quarter.

Houston used a 13-2 run early in the second half to pull away from the Jazz. Clint Capela got it going with a three-point play and finished it off with a dunk to give the Rockets a 74-53 lead with 7:00 left in the third quarter.

Houston led by as many as 25 points after Ariza buried a 3-pointer to put the Rockets up 91-66 in the opening minute of the fourth quarter.

Rockets: Houston has totaled 41 3-pointers in two games against Utah this season. . The Rockets went 14 of 14 from the free throw line over the final three quarters. . Harden has averaged 35.4 points in his last five games against the Jazz.

Jazz: Utah has allowed at least 37 points in a quarter only four times this season. Three of those high scoring quarters have come against Houston. . Gobert is averaging 5.0 points and 8.3 rebounds in 25.3 minutes per game since returning from a knee contusion.

Jazz travel to Milwaukee to face the Bucks on Saturday. It is the start of a six-game, 12-day trip.

Rockets travel to Portland to face the Trail Blazers on Saturday, concluding a three-game trip. 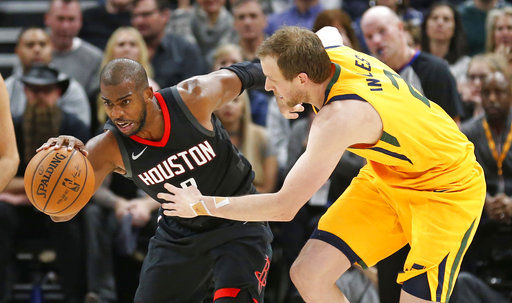 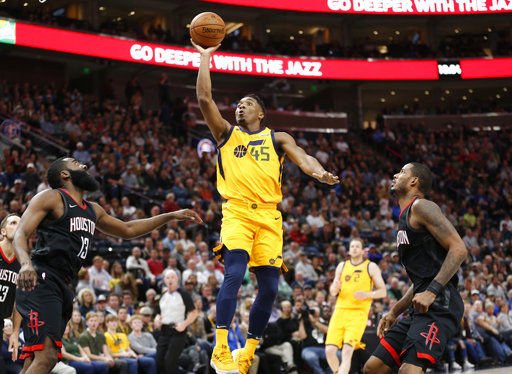 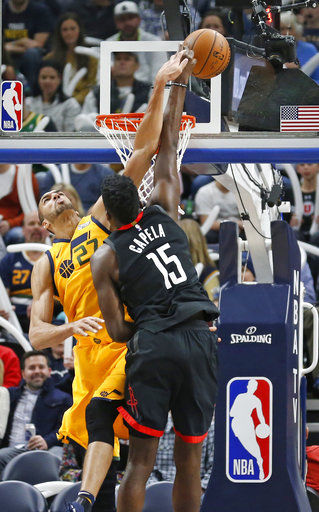