Utah Jazz forward/center Derrick Favors looks down as he walks to the bench during the second half of an NBA basketball game against the Chicago Bulls, Wednesday, Dec. 13, 2017, in Chicago. The Bulls won 103-100. (AP Photo/Nam Y. Huh)

CHICAGO (AP) — Nikola Mirotic is smiling again. The shots are falling. All the weightlifting work he did in the summer is paying off. The Chicago Bulls are winning.

That infamous practice fight is beginning to fade into the background.

“I think right now, Niko has brought a confidence to this team,” coach Fred Hoiberg said.

Mirotic made 11 of 18 shots from the field and grabbed nine rebounds in his best performance since he returned last week after missing the start of the season with facial fractures. The 6-foot-10 forward got hurt in a fight with teammate Bobby Portis, throwing the future of both players in question, but the Bulls are perfect since Mirotic returned to the court.

“We are enjoying playing the basketball together,” Mirotic said. “You can see good chemistry. The guys on the bench, they are all yelling, they’ve been happy. So I think after (what) we all get through, this team deserves it.”

Robin Lopez added 16 points for Chicago (7-20), and Dunn finished with 13 points, eight assists and seven rebounds. Portis scored each of his nine points in the fourth after he got off to a slow start.

“We’ve got to play better on the defensive end,” coach Quin Snyder said. “We’ve been here before, as far as the ball not going in. We have to be more stingy. We didn’t have that tonight.”

Dunn was 6 for 18 from the field, but he made a couple of big plays down the stretch. He connected with 1:39 to go to make it 98-94 Bulls. After Mitchell responded with a driving layup, Dunn made a stepback jumper over Alec Burks to restore the Bulls’ four-point advantage.

Dunn, David Nwaba and Justin Holiday each missed a foul shot in the final seconds, giving Utah one more chance. But Mitchell missed a running 3-point try as time expired.

Ricky Rubio added 14 points for Utah, which has dropped the first two on a six-game road trip. Burks finished with 13 points.

Utah trailed by as many 12 in the second quarter, but closed the half with a 17-6 run and kept up its solid play at the start of the third. Jonas Jerebko’s reverse layup with 7:06 left gave the Jazz a 63-58 lead, leading to a timeout by the Bulls.

Jazz: It was Mitchell’s third game of his rookie season with at least 31 points. … G/F Joe Johnson has been sidelined since Oct. 30 because of right wrist tendon instability, but he could return soon. “He can’t have contact in practice, but he’s been doing non-contact stuff in practice,” Snyder said. “It’s a question of sooner rather than later.” … G Raul Neto was held out due to a concussion. Neto left in the first quarter of Saturday night’s 117-100 loss at Milwaukee.

Bulls: Holiday finished with 12 points. … Portis was 0 for 5 from the field in 16 minutes heading into the final period. He scored a career-high 23 points in Monday night’s 108-85 victory over Boston. … Each of Chicago’s starters scored in double figures for the fourth time this season.

Chicago played without rookie forward Lauri Markkanen, who missed his second straight game due to back spasms. Markkanen, who is averaging 14.7 points and 8.1 rebounds, was originally listed in the starting lineup, but was replaced by Mirotic shortly before the game.

Jazz: Visit Boston on Friday night. The Jazz dropped both of their games against the Celtics last season.

Jay Cohen can be reached at http://www.twitter.com/jcohenap 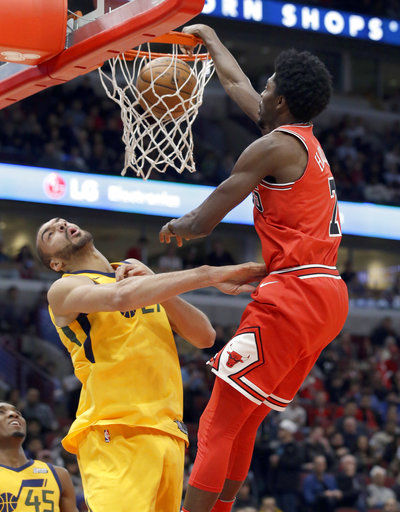 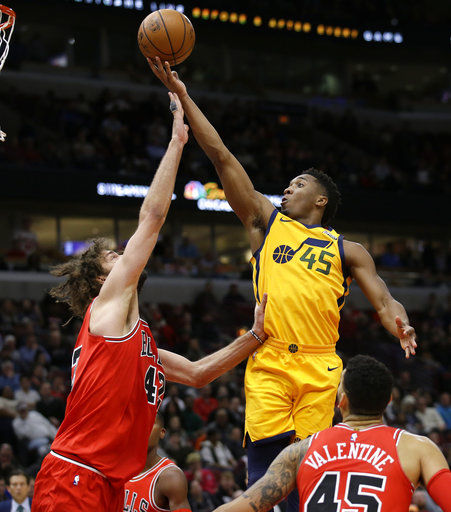 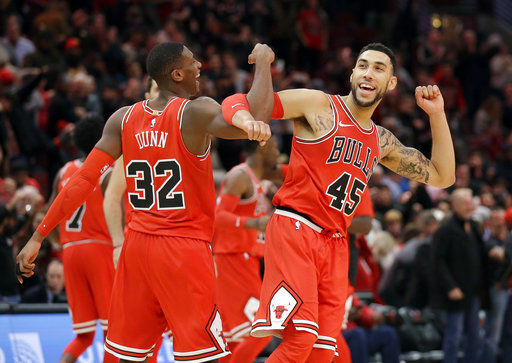 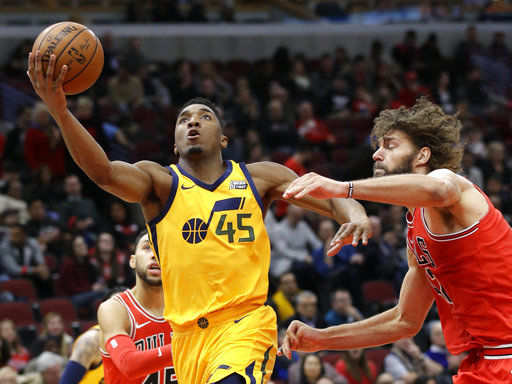