BOSTON (AP) — The Utah Jazz broke out of a slump that has been plaguing them during their current road trip.

But it came at the cost of two of their starters — one possibly for an extended period.

Jonas Jerebko and Rodney Hood also finished with 17 points for the Jazz, who snapped a four-game losing streak. It was Utah’s first victory in Boston since 2008, a span of nine games.

It took everything the Jazz had to make it to the end of the game.

Jazz center Rudy Gobert left early in the first quarter with a left knee injury after teammate Derrick Favors fell backward into his leg. Gobert was able to walk off the court on his own power, but went straight to the locker room and did not return.

The second quarter brought more injuries. First, Boston’s Daniel Theis left with a facial injury. Later, the Celtics’ Jaylen Brown caught Favors with an incidental elbow, leaving him bleeding from his left eye and Brown from his elbow. Favors received six stitches and did not return.

“That’s a team win. Everybody stepped up,” Rubio said. “We know that we have a lot of players who can play, and they were ready.”

“This group’s got character and they are going to compete no matter what the circumstances and they did,” Snyder said.

Boston got no closer than eight points in final quarter.

“I gotta give Utah credit, because they grinded the game and they made tough shot after tough shot,” Horford said. “They kind of, like, took the life out of you in a way.”

Friday was the first meeting between the teams since Gordon Hayward left Utah in free agency last summer to join the Celtics. But Hayward could only watch as he continues to rehab from the broken left ankle he suffered in Boston’s season opener.

Joe Johnson returned to game action for the first time since Oct. 30. He missed 21 straight games while dealing with a right wrist injury.

Jazz: G Raul Neto sat out his second straight game with a concussion.

Celtics: It was Irving’s ninth game this season with 30 or more points. … Started the second quarter 0 for 14 from the field.

The Jazz led by as many as 10 in the half and outscored the Celtics 25-13 in the second quarter.

The Celtics struggled from the field in the second quarter, shooting a combined 4 for 21.

Hayward is open to playing this season, but said it will depend on how fast he is able to heal and show progress as he works his way back.

“My mind is open to that,” Hayward said of the possibility of returning to game action before season’s end. “I’m trying to get back as fast as I can. It all depends on how I heal, and taking it day-by-day, goal by goal. We’ll see what happens.”

Wednesday marked a milestone in Hayward’s recovery process, when he was able to shed the walking boot he’s been using since his surgery in October. He continues to wear a protective brace.

Snyder said no one feels any animosity over Hayward’s decision to leave Utah.

“I think everybody understands the decision that he made,” Snyder said. “So to see him get hurt, it was hard. I felt horrible for him. I think most of the guys on our team reached out. I know I did. … We hope that he’s back soon.”

Marcus Morris (knee soreness) sat out his fourth straight game and won’t travel for the upcoming two-game trip. Morris has played in just 16 games this season while dealing with the injury and recently sought a second opinion on it.

“He’s had a little bit of a setback here, but it doesn’t sound like it’s going to be a long-term thing,” Celtics coach Brad Stevens said. 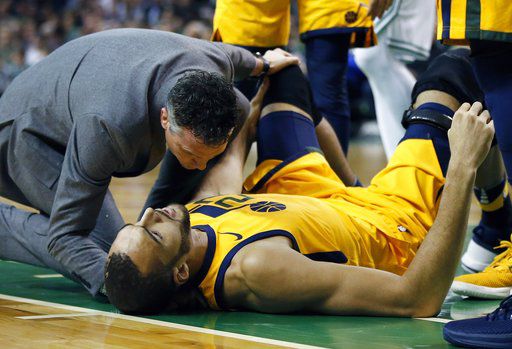 Utah Jazz's Rudy Gobert lies on the court after being injured during the first quarter of an NBA basketball game against the Boston Celtics in Boston, Friday, Dec. 15, 2017. (AP Photo/Michael Dwyer) 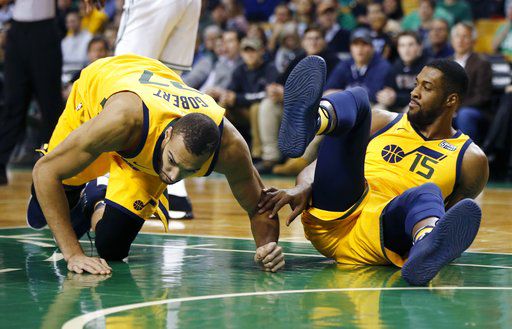 Utah Jazz's Rudy Gobert (27) kneels on the floor beside teammate Derrick Favors (15) during the first quarter of an NBA basketball game against the Boston Celtics in Boston, Friday, Dec. 15, 2017. Gobert left the game with a knee injury after Favors fell backward into his leg on the play. (AP Photo/Michael Dwyer) 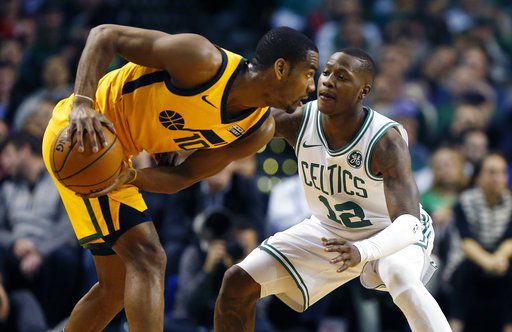 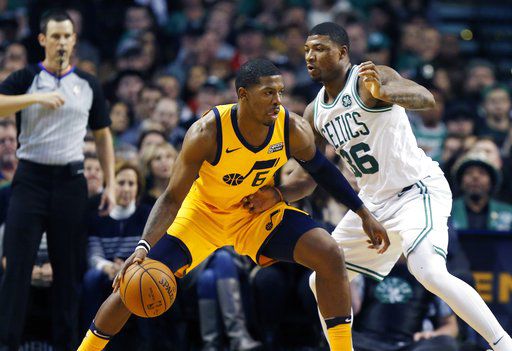