Houston Rockets guard James Harden (13) reacts after teammate PJ Tucker made a basket and was fouled during the second half of an NBA basketball game against the Utah Jazz, Monday, Dec. 18, 2017, in Houston. Houston won the game 120-99. (AP Photo/Eric Christian Smith)

HOUSTON (AP) — With the amount of offensive weapons Houston has, teams have to choose who they’re going to try and stop.

That often leaves other players with great opportunities to score, as was the case on Monday night when Utah keyed in on slowing down James Harden and Chris Paul to pave the way for Eric Gordon’s big night.

Gordon scored 17 of his season-high 33 points in the fourth quarter to power a huge run that put the Rockets on top, and they cruised to their 14th straight win, 120-99.

Houston used a 15-0 run early in the fourth to take the lead and was up by four midway through the quarter after a layup by Joe Ingles. The Rockets then scored 11 points in a row, capped by two 3-pointers from Gordon to make it 111-96 with about three minutes to go.

Gordon said that was the hottest quarter he’s ever had and when he got rolling he hoped his teammates would continue to find him.

“You’re looking for it every time down the court,” he said. “I think guys were looking for me and it was just a fun game in that fourth quarter.”

The Rockets struggled from long range for most of the night, making just nine of 31 3-pointers in the first three quarters. The found their groove in the final period, when they made eight of 12 with five from Gordon to pull away for their 20th win in 21 games.

Coach Mike D’Antoni was certainly happy Houston got the victory, but could have done without the Rockets waiting until the fourth quarter to pull away.

“We’re getting away from getting out there and getting after them right at the beginning and blowing them out,” D’Antoni said. “Now we’re waiting until the end. We’re going against that and we’ll try to do a better job.”

Rodney Hood had 26 points off the bench for the Jazz, who have lost six of their last seven games. Without Dante Exum all season as he recovers from left shoulder surgery, the Jazz were also missing Derrick Favors, Rudy Gobert and Raul Neto to various injuries on Monday night.

“We didn’t have enough at the end,” Utah coach Quin Snyder said. “We couldn’t get stops in the fourth quarter and that can happen. We can say we ran out of gas, but they just continued to put pressure on us.”

Utah led by five points entering the fourth quarter and had extended the lead to eight with about 10 minutes remaining. Houston then scored the next 15 points, powered by three straight 3-pointers by Gordon, to make it 98-91 with about 7 1/2 minutes left.

Gordon made the first two before the Jazz called a timeout, but that didn’t cool him off as he hit another on Houston’s first possession after the timeout. Capela added a three-point play after that before Trevor Ariza added a 3-pointer to bring the crowd to its feet and spur Snyder to call another timeout.

The Rockets were up by one at halftime. Utah scored the last five points of the third with a 3-pointer from Hood to take an 84-79 lead into the fourth quarter.

Andre Ware, who won the Heisman Trophy in 1989 at Houston, participated in the Rockets’ First Shot promotion on Monday night where celebrities can win a $5,000 donation from owner Tilman Fertitta if they make a free throw. It didn’t appear that the 49-year-old’s athletic prowess translated to the basketball court <a href=”http://www.espn.com/nba/video?gameId=400975196″ target=”&mdash;blank”>as he air-balled the shot</a> . Ware laughed and shook his head as the ball fell short of the basket. He wasn’t too upset though as he still earned $1,000 for charity by participating in the event.

Harden on Houston’s defense in the fourth quarter: “First three quarters we didn’t get stops consistently, and so we really couldn’t get out in transition. But (in the fourth) we got stops and knock down 3s — game’s over.” 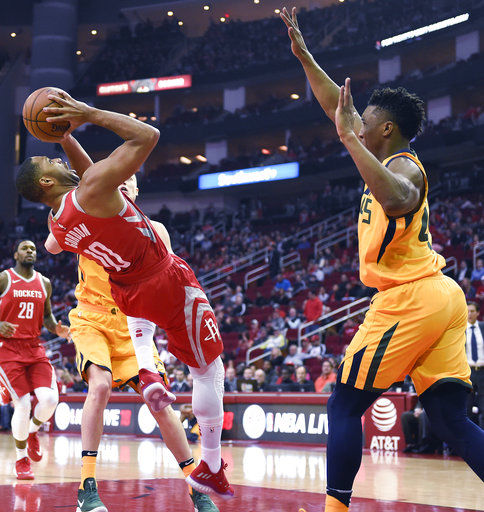 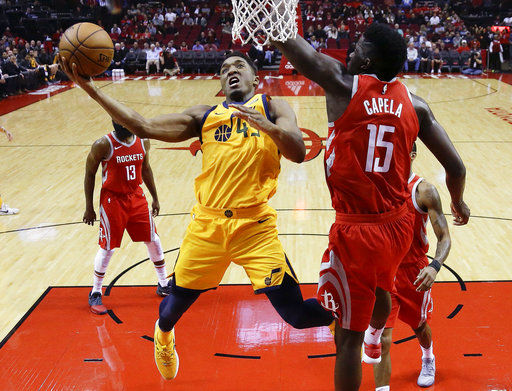