A new art studio is coming alive inside the old Miller’s Valley Glass building on Logan’s Main Street. This isn’t an ordinary art studio, though. It’s designed to develop the often-hidden artistic talent of those who are limited by physical or cognitive disabilities.

Michael Bingham has spent more than 30 years in the art industry, both as a professional artist and as a high school art teacher. He noticed some students had creative talent that was stuck behind disabilities. He envisioned a studio that would free those talents by giving the artists access to mentors and specialized tools.

With that vision, Bingham started the Jump the Moon Foundation, the organization that is giving artists with disabilities a chance to create, display and market their own artwork.

“We’re actually standing in a place where we can do that,” Bingham said. “We’ve already got some artists coming down. In the near future we’ll have kids from the school district coming down and doing more here.”

“The thing it builds on is the person’s skill,” Bingham said, “or the thing they are good at.”

Based on the artists’ needs, Bingham has a shop in the back to create the specialized tools himself. Linda Loosley is one of those artists. She said she has always liked to paint, but because she is in a wheelchair, painting was tiring. Until Bingham came along, Loosley always had to work with her canvas lying flat on the ground. Now, with Jump the Moon’s large easel that can be adjusted with the slightest touch of a finger, she can reach any part of her painting with minimal effort.

Much of the studio has been designed that way – with accessibility in mind.

“For anyone getting around in a wheelchair it is wonderful because it exerts less energy,” Loosley said.

It isn’t just adaptive equipment and accessibility that sets the Jump the Moon studio apart. Mentors are available to help the artists develop their skills and to help them market their work. An accompanying gallery showcases the art, which is available to interested buyers.

“A lot of the students we work with, and the adults too, have never been able to maybe sell what they do or use their talent to provide for themselves or their families,” Bingham said. “We’re about that too. It’s kind of a vocational place where we can help people become working artists.”

Jump the Moon hasn’t had its official grand opening yet, but it already has a success story. Those who visit will likely find Rene Lopez in one of the back rooms, away from the noise and the distractions of the often-lively studio. Lopez has always enjoyed making art, but didn’t have a space to work in or mentors to help him develop his skills. Jump the Moon has provided both, and has helped him get his work noticed. Lopez was recently commissioned to create a 60-by-5-foot mural for the Cache Valley Humane Society.

Christine Clark, who joined Jump the Moon as its executive director, said the organization has helped bring Lopez’s talent out of the dark.

“He has gone from watching TV all day to suddenly being recognized as a legitimate artist who can sell his own artwork,” she said. “How amazing is that?”

Jump the Moon mentor Kenzo Tillitt said he likes to help the artists get inspired and get started, but never does their work for them.

“I want it to be theirs,” he said. “It’s all about finding a way to empower them to make it themselves.”

That’s the exact kind of instruction artist Nathan Miller was looking for. Miller said he enjoys coming up with his own ideas of how he wants to express himself, then gets a mentor’s guidance along the way. Miller now has multiple pieces on display in the studio’s gallery he is hoping to sell.

“It’s been a tremendous experience coming in and working with other artist’s and learning form Mike’s expertise,” he said.

Tillitt said the studio provides a space to create without the fear of judgement.

“Some of these people that have disabilities are the most creative people in the world,” he said. “They just need a way to show it, a way to get it out. There are plenty of people that have astonished me with their creativity, things that I would never think of.”

Ormonde Cragun, a co-founder of Jump the Moon, joined the organization to help with some of its administrative aspects. He said the biggest challenge to keep the program operational is funding. Junp the Moon got its start with surplus art supplies from the Cache County School District and other private donations, but it will still require more.

“We have had a lot of people help us start out,” Cragun said, “but now we need to get sources of funding that can sustain us in the long term.”

To get that funding, the Jump the Moon team is getting creative. In addition to applying for grants, Cragun said the studio will host community art nights and possibly do some collaboration with the local schools and Utah State University.

Clark said she was looking for an organization where she could help make a difference, and that Bingham’s vision and understanding for people with disabilities was just that.

“Just because they have certain problems in their lives that would hinder their ability to move or cognitive disabilities, it doesn’t mean that they aren’t gifted or aren’t talented,” she said. “(Bingham) told me that these people get shoved aside and that he had worked long enough with them to know that they deserve a chance like anyone else.” 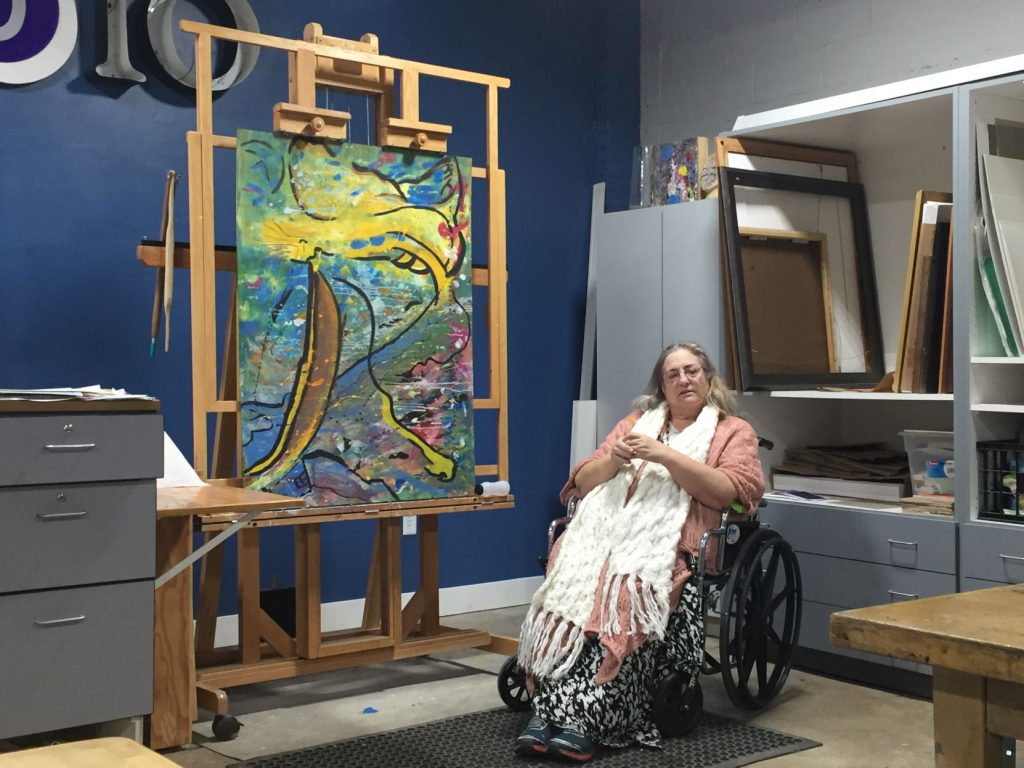 Jump the Moon artist Linda Loosley next to her painting. The easel is designed to be adjusted with the a touch of a finger. 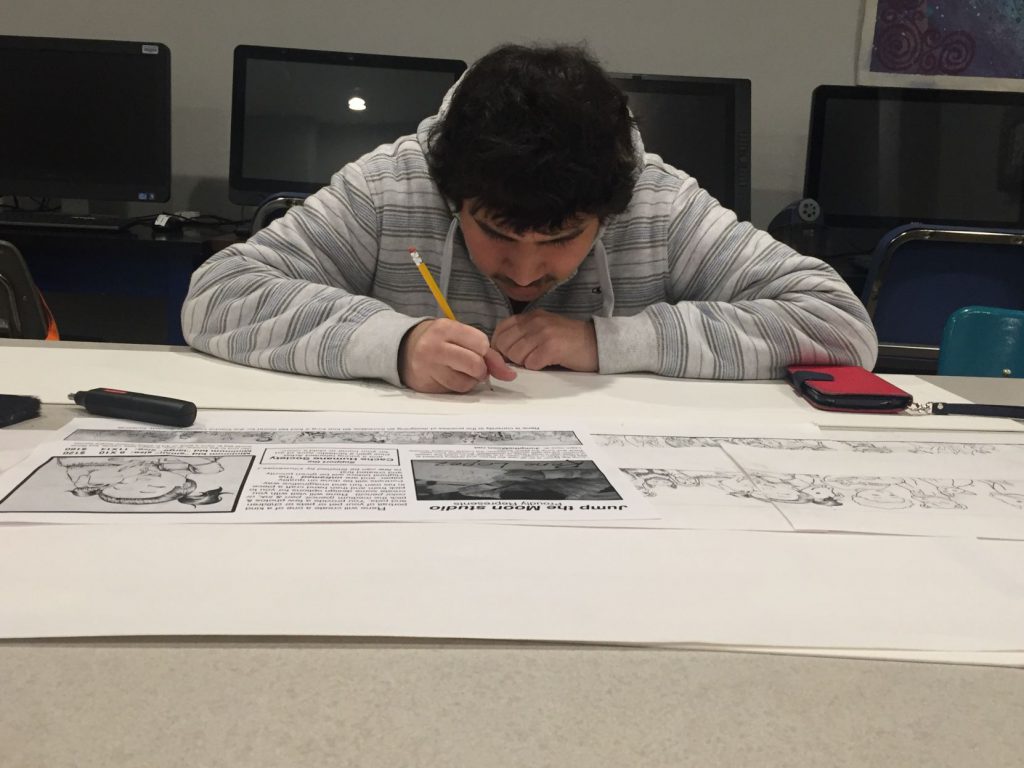 Jump the Moon artist Rene Lopez works on his latest project, a mural for the Cache Valley Humane Society.