SALT LAKE CITY (AP) — The Oklahoma City Thunder got the kind of night they envisioned when they brought in Paul George and Carmelo Anthony to join reigning MVP Russell Westbrook.

Westbrook had 27 points, 10 rebounds and 10 assists, and the Thunder won their fourth in a row with a 103-89 victory over the Utah Jazz on Saturday night.

Utah had no answer for Westbrook, George and Anthony, who were playing the second night of a back-to-back.

“We’re just finding it,” Anthony said. “Everybody’s doing what they’re supposed to do. Everybody’s playing their game. We’re not playing as tense and thinking so much out there on the basketball court as we were a couple weeks ago. The flow of the game is starting to become better and better for everybody. Guys are starting to be comfortable with what’s being asked of them and kind of just accepting it.

“Just playing basketball at this point.”

Westbrook had his 11th triple-double of the season. George had 26 points, five rebounds, a season-high six steals and two blocks, and Anthony added 16 points.

Rookie Donovan Mitchell scored 29 points for the Jazz after missing the last two games with a big toe contusion. It was his 11th 20-point game of the season, the most among NBA rookies.

“Russell had a really good all-around game from start to finish,” Thunder coach Billy Donovan said. “Thought we had a great night from Paul. Carmelo didn’t maybe shoot the ball as well as he has the last couple games, but he got the kind of looks that (we like). He got 10 3s up, which was great.”

The Thunder controlled the game most of the night and weren’t threatened after a spurt by George and Westbrook that pushed their lead to 13 in the third quarter. Westbrook’s pull-up jumper was lethal, and back-to-back 3-pointers by George seemed to take all the energy from Utah. The Jazz never got closer than nine points the rest of the way.

“I didn’t feel like we executed offensively,” Jazz coach Quin Snyder said. “When you play a team that’s long and athletic defensively, you need each other even more. You have to execute with even more force and commit and we weren’t able to do that.”

The Jazz held their only lead of the game at 4-3.

“They take you out of your offense,” Mitchell said. “They’re aggressive. As you saw, I made a few passes that, against certain teams, are open. But when you have guys who are long and athletic and quick, those passes aren’t there.

“That’s the one thing we have to accept, the aggression, and then counter it. I don’t think we did that until we got toward the end of the game.”

Thunder: Oklahoma City held the Jazz to 23.1 percent shooting from behind the arc.

Jazz: Raul Neto missed his seventh straight game with a concussion. … Rodney Hood started the game 0 for 7 and finished with nine points after scoring 29 on Thursday.

The Thunder have won 10 of 13 as Westbrook, George and Anthony have gotten more comfortable playing together.

“I still think we’re going to continue to grow and get better,” Donovan said. “These guys are working hard to try to figure it out. They’ve all played a certain way for their entire careers, and they all have to adjust because when you play, you’re playing inside of a team. It requires adjusting. And sometimes those adjustments are hard.

“In a lot of ways they’re being taken out of their element and being asked to do things maybe they haven’t had to do before. … When you get inside of a team, you have to play to the identity of what’s going to best suit the team.”

Thunder: Host James Harden and the Houston Rockets on Monday.

Jazz: Travel to face the Denver Nuggets on Tuesday. 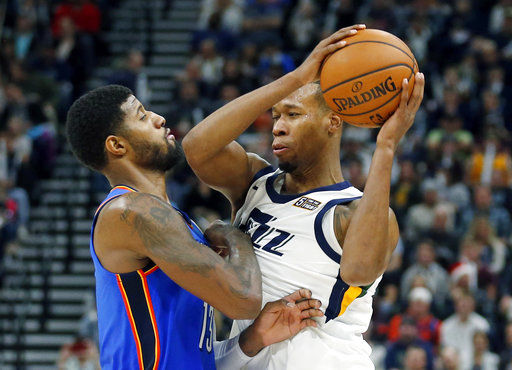 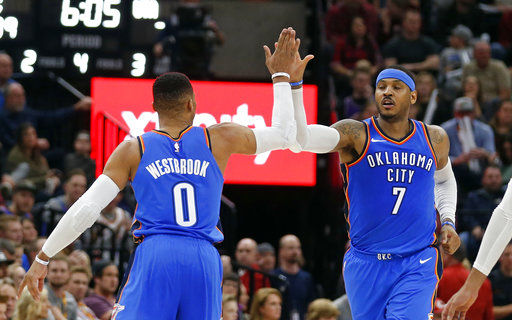 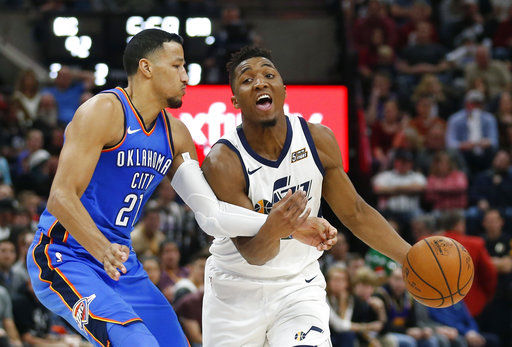