Utah Jazz forward Derrick Favors, left, is called for a foul while trying to steal the ball as Denver Nuggets center Nikola Jokic, of Serbia, fields a pass in the second half of an NBA basketball game Friday, Jan. 5, 2018, in Denver. (AP Photo/David Zalubowski)

Lyles also grabbed seven rebounds. He averaged 21 points and 7.5 rebounds in the two home games against his former team to help the Nuggets split the season series with the Jazz. Denver outscored the Jazz 38-16 in the third quarter after trailing by three at halftime.

Donovan Mitchell had 15 points, seven rebounds and seven assists, Ricky Rubio also scored 15 points and Derrick Favors had 14 points and 10 rebounds for Utah. The Jazz have lost 12 of 15 since starting the season 13-11.

The game was tied at 56 when Murray hit a 3-pointer, was fouled and made the free throw to start a 20-5 Denver run. Nikola Jokic, who missed his first four shots of the third quarter, capped the run with his first 3-pointer to give the Nuggets a 76-61 lead with 3:37 left in the third.

Lyles converted a three-point play to extend the lead to 17, and Will Barton’s 3-pointer in the final minute of the period gave Denver an 84-65 lead heading into the fourth.

The lead was 21 early in the fourth before Utah made a run to close within eight in the final minute.

Jazz: Nuggets president Josh Kroenke played for coach Quin Snyder at Missouri from 1999-2004. “Josh was my first recruit,” Snyder said. “You could count on Josh to do what he could do to help you win a game. That’s probably the best compliment you can give a player, and that’s how he’s running his team.” … C Rudy Gobert will have his injured left knee reevaluated next week. He has been out since Dec. 15. … Utah lost for the third time when holding an opponent to fewer than 100 points.

Nuggets: Barton was feeling better after battling flu-like symptoms the past couple of days. He finished with 12 points and eight assists. … G Gary Harris had 13 points two days after matching his career high of 36.

Jazz: At Miami on Sunday.

Nuggets: At Sacramento on Saturday night. 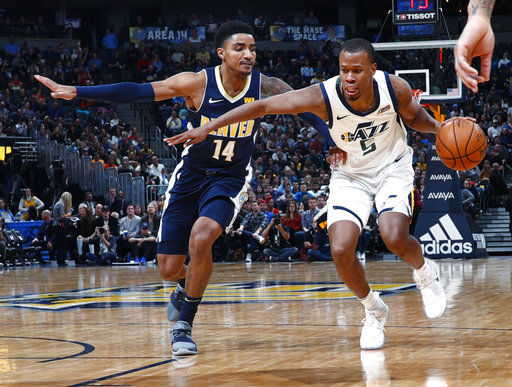 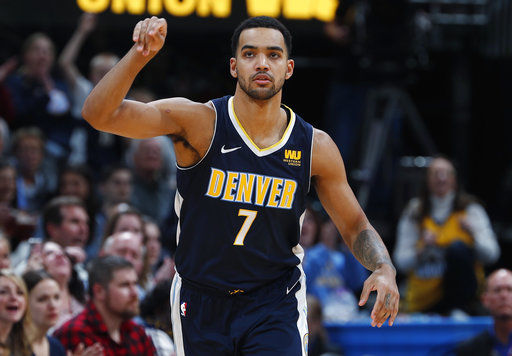 Denver Nuggets forward Trey Lyles reacts after hitting a three-point basket against the Utah Jazz in the second half of an NBA basketball game Friday, Jan. 5, 2018, in Denver. (AP Photo/David Zalubowski) 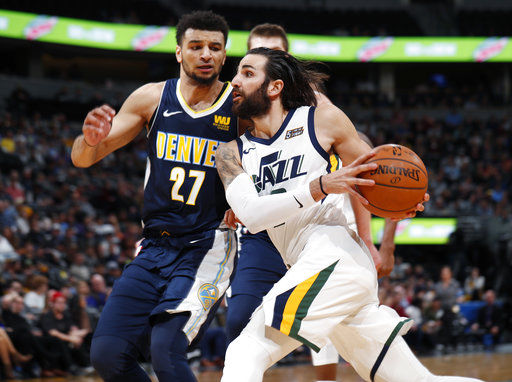 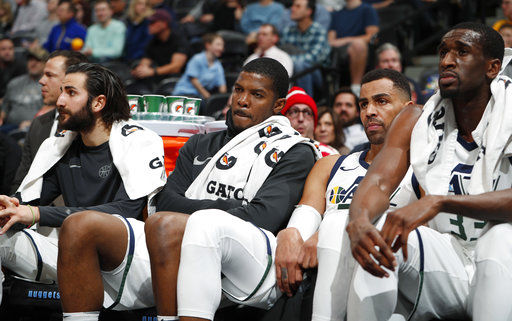 Utah Jazz's Ricky Rubio, of Spain; and Johnson; Thabo Sefolosha, of Switzerland; and center Ekpe Udoh, from left, watch from the bench as the Jazz trail the Denver Nuggets during the second half of an NBA basketball game Friday, Jan. 5, 2018, in Denver. The Nuggets won 99-91. (AP Photo/David Zalubowski)