Utah Jazz guard Donovan Mitchell (45) goes to the basket against the Miami Heat during the second half of an NBA basketball game, Sunday, Jan. 7, 2018, in Miami. (AP Photo/Joel Auerbach)

MIAMI (AP) — The last Miami play was designed by Heat coach Erik Spoelstra to put the ball in Josh Richardson’s hands, and with it came the right to decide who would take his team’s biggest shot of the game.

It was the right call.

Richardson’s layup with 5.1 seconds left capped a Miami rally from eight points down in the fourth, Donovan Mitchell missed a jumper for Utah at the buzzer and the Heat simply stole one in the final moments to beat the Utah Jazz 103-102 on Sunday.

“He drew it up for me and I was kind of surprised,” Richardson said.

So surprised, in fact, that Richardson emerged from that huddle telling Wayne Ellington and Tyler Johnson to get ready for his pass. But a lane opened to the rim, Richardson laid the ball home and the Heat won their fourth straight — all by single digits, Miami’s longest stretch of such wins since November 2012.

“Utah played a very good basketball game,” Spoelstra said. “In many ways, they deserved to win this one. But we’ve got to make up some ground. We’ve given up some games that we wish we could have had back, so quite frankly we need to steal some.”

Tyler Johnson and Goran Dragic each scored 16 points for Miami. Richardson and Hassan Whiteside each had 14, James Johnson 13 and Kelly Olynyk had 12.

Mitchell scored 19 of his 27 points in the second half, but couldn’t save Utah from dropping its seventh straight on the road. He went into the backcourt to take the final inbounds pass and wound up taking a jumper from the right side that missed as time expired.

Mitchell kicked himself afterward, realizing too late Rodney Hood might have been open.

“I should have made the right read instead of shooting it,” Mitchell said.

“We obviously did a few things right,” Jazz coach Quin Snyder said. “It doesn’t feel like it right now.”

Miami improved to 2-14 when trailing after three quarters.

Mitchell was 3 for 12 in the opening half, after going 5 for 14 against the Heat when the teams met in November. It was like he was due to break out — and did just that, needing only 3 minutes to score Utah’s first 11 points of the second half.

“Find a way at the end,” Spoelstra said.

Jazz: The 3:30 p.m. EST tip is the earliest for Utah this season. … The Jazz scored 74 points in the teams’ first meeting this season; Joe Johnson’s jumper with 1:09 left in the third gave Utah 75 on Sunday. … Utah is off until Wednesday, which means the Jazz — who had time for exactly one non-gameday practice in December — will get one during this trip.

Heat: Miami plays seven of its next eight, and 11 of its next 14, on the road. … There’s been no change yet in the status of Dion Waiters, who sought a second opinion on his sprained left ankle last week. Waiters missed his sixth consecutive game. … The Heat sent Derrick Walton Jr. to Sioux Falls of the G League over the weekend, after he appeared in 12 games with Miami.

NBA Commissioner Adam Silver watched the game from the stands. He’s in Miami for league marketing meetings scheduled for this week.

Whiteside had tip-ins on consecutive possessions in the first quarter, 22 seconds apart, which sounds great — until realizing it happened on both ends of the floor. Favors was credited with the basket when Whiteside accidentally deflected the ball in for two Utah points, and on the ensuing Miami possession the Heat center tipped in a miss by Dragic.

Jazz: Visit Washington on Wednesday night, as their trip continues. 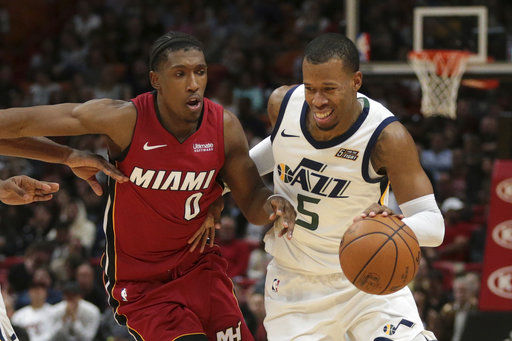 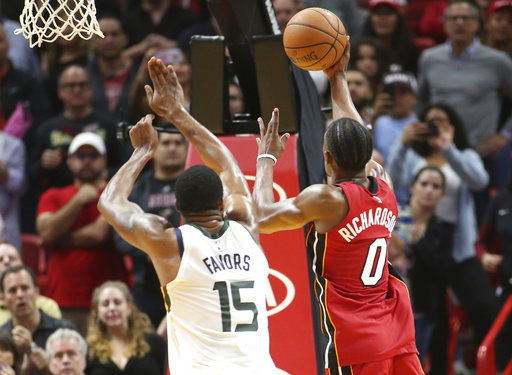 Miami Heat guard Josh Richardson (0) goes to the basket against Utah Jazz forward Derrick Favors (15) to score the winning basket with seconds left during the second half of an NBA basketball game, Sunday, Jan. 7, 2018, in Miami. (AP Photo/Joel Auerbach) 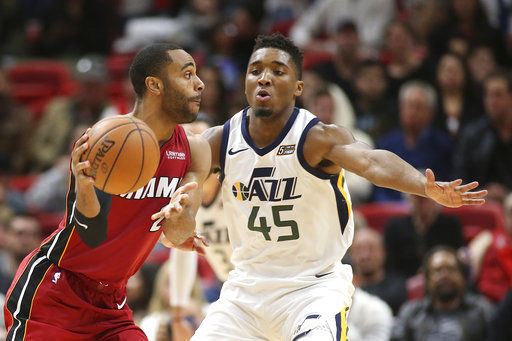 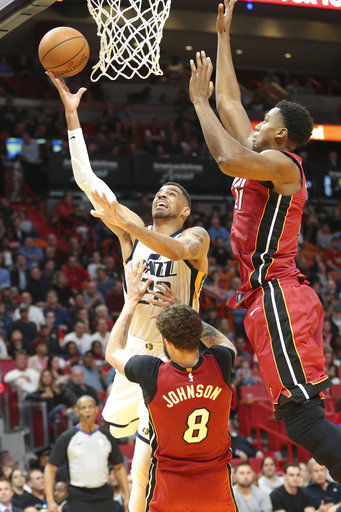