WASHINGTON (AP) — The Washington Wizards had every reason to take the Utah Jazz seriously after they were routed by 47 points in Utah last month.

Ricky Rubio scored 21 points, Donovan Mitchell had 16 and the short-handed Jazz completed a season sweep of the Wizards with a 107-104 win on Wednesday night.

“That is something you never stop thinking about as a competitor,” Washington forward Kelly Oubre Jr. said of the previous drubbing, “and that’s why it hurts even more to lose this one.”

Utah played without two starters, and second-leading scorer Rodney Hood was ejected in the second half.

“We had a great effort from a lot of guys and I think at the end there’s just a determination,” Jazz coach Quin Snyder. “We were fortunate that a few shots missed and we made a couple big ones when we needed to. I thought we made some of our own luck tonight.”

Washington did not have John Wall in the first meeting with Utah. The four-time All-Star had 35 points and 11 assists but committed eight of the Wizards’ season-high-matching 23 turnovers.

Bradley Beal had 23 points, but lost the ball with 2.9 seconds remaining while attempting a game-tying 3-pointer.

“You’re not going to win a game if you turn it over that many times,” Beal said.

Washington shot 8-for-22 in the fourth quarter.

“We know on offense you can make or miss shots but on defense you’ve got to make stops at the end,” Rubio said, “and I think we did it tonight and that’s why we got the win.”

The Wizards shot 52.6 percent from the field but lost their second straight after winning their previous four. Utah (17-24) got just its fourth road win of the season.

Washington trailed by 10 early in the fourth quarter before Wall hit a pair of 3-pointers during an 11-3 surge that gave the Wizards a one-point lead.

Joe Ingles responded with a 3-pointer that put Utah ahead 104-102 with 1:09 remaining. Washington’s defense erred with an ill-advised double-team on Mitchell’s penetration.

“It was good in the first half, (but) in that third quarter, and then the last two minutes we made so many mistakes. … It cannot happen,” Wizards coach Scott Brooks said.

Washington led most of the first half and 50-46 at halftime, but Utah seized momentum with a 16-3 run in the third quarter, during which Hood received his second technical foul. Rubio’s jumper after one of the Wizards’ nine turnovers in the quarter put the Jazz up 83-75.

Wizards: F Otto Porter (hip, back) had 14 points after missing Saturday’s game against Milwaukee. Oubre had 12 points. … The team handed out All-Star Game promotional boxes with images of Wall and Beal on the front. Items inside included M&amp;Ms with pictures of each guard and “#NBAvote” on the back. … F Devin Robinson, Washington’s lone two-way contract player, joined the Wizards for the first time this season.

Walking off the court following his ejection with 2:21 remaining in the third, Hood smacked a phone out of the hands of a fan in the stands. The Jazz responded with a 9-0 run.

Beal’s run of poor shooting late in games continued. Washington’s leading scorer missed 6 of 7 shots in the final period after going 0-for-8 in his previous two fourth quarters.

Jazz: Close their four-game trip at Charlotte on Friday night. 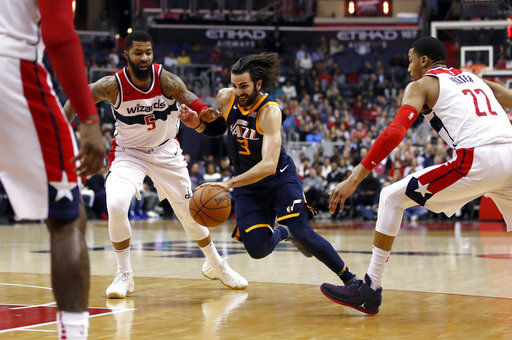 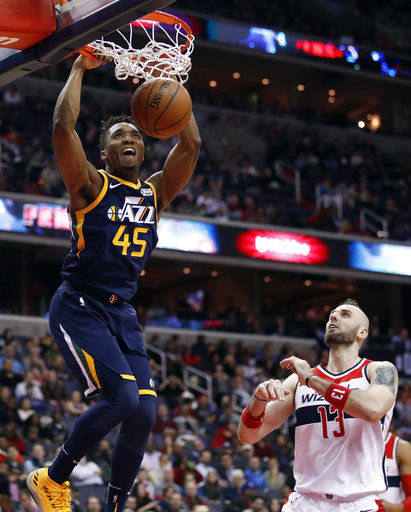 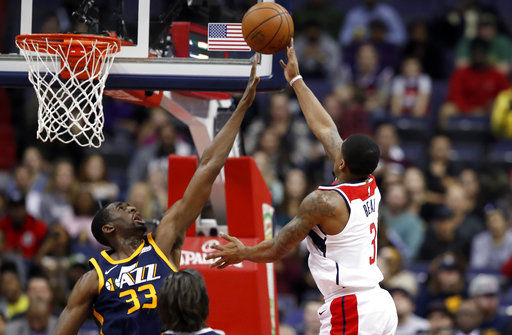 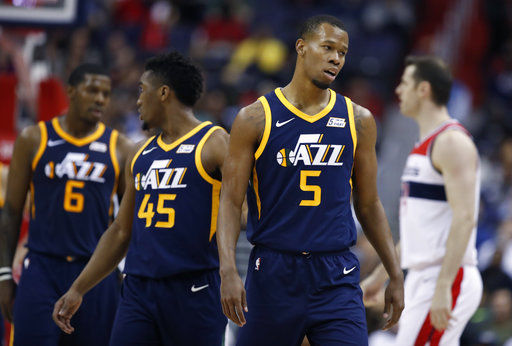 Utah Jazz guard Rodney Hood (5) leaves the court after his second technical foul, forcing his ejection during the second half of an NBA basketball game against the Washington Wizards, Wednesday, Jan. 10, 2018, in Washington. The Jazz won 107-104. (AP Photo/Alex Brandon) 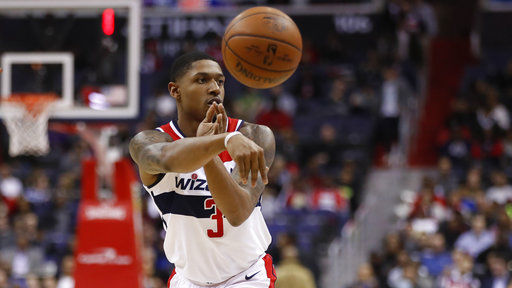 Washington Wizards guard Bradley Beal (3) passes the ball during the first half of an NBA basketball game against the Utah Jazz, Wednesday, Jan. 10, 2018, in Washington. (AP Photo/Alex Brandon)