CHARLOTTE, N.C. (AP) — With Dwight Howard struggling with his shot and a tough back-to-back looming, the Charlotte Hornets needed a bit of variety on offense against the Utah Jazz.

“We had a post-up game, we had a pick-and-roll game, we had a catch-and-shoot game,” said Hornets associate head coach Stephen Silas. “Nic (Batum) got going early, and we’ve been talking a lot.”

Marvin Williams scored 15 and Michael Kidd-Gilchrist 12 for Charlotte, which won despite an off night for Howard, who scored just two first-half points. Howard finished with eight points on 2-of-9 shooting. He also went 4 for 10 from the foul line and led the team with 13 rebounds.

Charlotte will go for a season sweep of the Thunder at home on Saturday. The Hornets won at Oklahoma City 116-103 on Dec. 11.

“I think our defense was really good in the fourth quarter,” said Howard, who last was held in single digits Dec. 31 (four points at Los Angeles Clippers). “Marvin hit some big 3s, got a big cut to the basket and we got a good win. We needed it, especially after last game.”

Batum and Jeremy Lamb added 11 points apiece for Charlotte, which lost to Dallas 115-111 on Wednesday to start a three-game homestand.

Donovan Mitchell scored 35 points for Utah, which has lost 14 of 19. Rodney Hood added 15 and fellow reserve Royce O’Neale 11 for the Jazz, who had been 10-3 when holding opponents to 100 points or fewer.

Mitchell, a rookie who scored a career-best 41 in a win last Friday against New Orleans, had 22 points at halftime on 7-of-12 shooting. Charlotte limited him to 3-of-8 shooting the rest of the way.

“We’ve tried to not put a ceiling on him one way or the other,” Jazz coach Quin Snyder said of Mitchell. “Just focus on day-to-day what he’s doing. From that standpoint, he continues to get better. He struggled late in a playmaking position, so he’s figuring things out.”

Jazz: Forward Thabo Sefolosha left the game with a knee injury in the second period. … Rudy Gobert missed his 13th consecutive game (knee). . Utah had won seven of the past 10 matchups with Charlotte.

Hornets: Charlotte has had five different leading scorers in its past 11 games. … Walker opened 4 for 4 on 3-pointers before missing his last two.

Hornets coach Steve Clifford will rejoin the team for practice on Tuesday. Clifford, who left the team Dec. 6 because of health reasons, will coach the Hornets Wednesday against Washington. He spoke with his team on Friday.

“It’s great news,” Batum said. “I called him right away and talked to him. It’s good to know he’s coming back, and it’s good to know he’s getting better. He’s been out a few weeks, and it could be scary (to be sick), but the most important thing right now is his health.”

Utah finished an Eastern road swing 1-4, and the loss to Charlotte Friday was the only one by double digits.

“That’s always there,” Snyder said of his team’s energy level late. “You have to figure it out. I thought we fought through it. Defensively we didn’t have a ton of life, but I thought our bench gave us a big lift when (Hood and O’Neale) came in.” 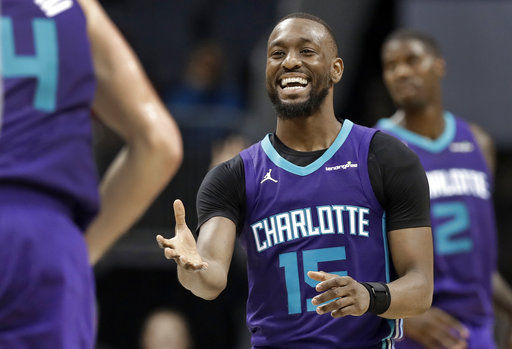 Charlotte Hornets' Kemba Walker (15) smiles after a basket against the Utah Jazz during the second half of an NBA basketball game in Charlotte, N.C., Friday, Jan. 12, 2018. (AP Photo/Chuck Burton) 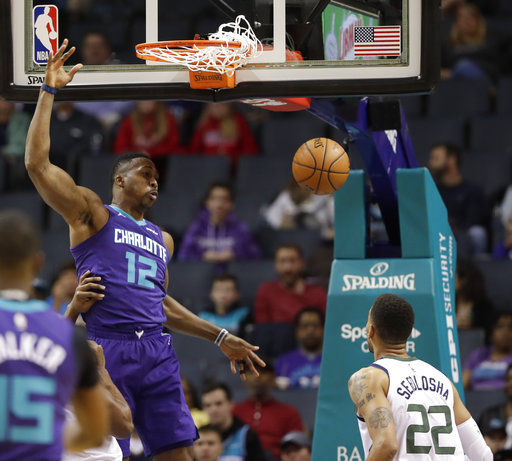 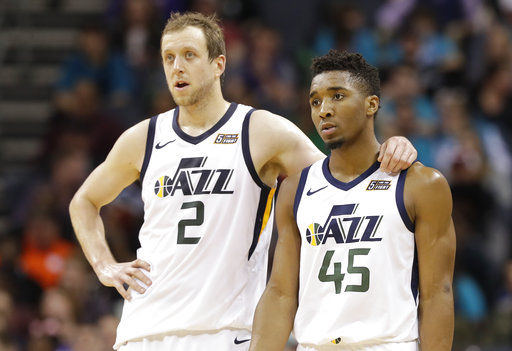 Utah Jazz's Joe Ingles (2) talks with Donovan Mitchell (45) during the second half of an NBA basketball game against the Charlotte Hornets in Charlotte, N.C., Friday, Jan. 12, 2018. (AP Photo/Chuck Burton) 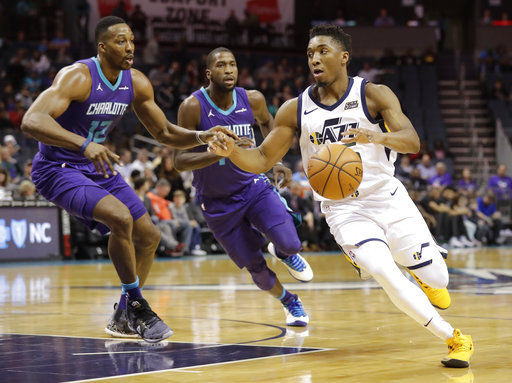