ATLANTA (AP) — The Atlanta Hawks are starting to see some results from their improved play.

“We’ve got to keep it going,” said Prince, who matched his scoring output from the last four games combined.

The Hawks began to pull away late in the third quarter, closing with a 13-3 run for a 74-63 lead that was their largest to that point. Dewayne Dedmon knocked down a 3-pointer, Malcolm Delaney converted a four-point play and Schroder scored off a couple of drives.

It got totally out of hand at the start of the fourth.

The Jazz missed their first five shots, and the Hawks put the game out of reach with a 10-0 spurt that included a three-point play from rookie John Collins and Bazemore’s jumper beyond the arc.

“There were times it looked like we didn’t want to play. Including me,” said Donavan Mitchell, who was held to 13 points by Bazemore.

“It’s OK to get tired of yourself sometimes,” Prince said. “You’ve just to work through it. I’ve got to continue to take my shots and continue to play defense.”

Alec Burks came off the bench to lead the Jazz with 17 points. Utah’s starters combined for just 40 points.

“He’s a good player,” Bazemore said. “I just tried to match his energy.”

At the end of the first half, the officials checked out the replay of a long jumper that Belinelli took with more than four minutes to go in the second quarter.

Originally ruled a 2-pointer, it was changed to a 3 after the replay showed Belinelli’s foot behind the stripe. So, when the Hawks returned for the third quarter, they had a 42-41 lead instead of being tied at 41.

Belinelli also had the best shot of the night, though this one didn’t count.

After a frenetic last few seconds of the first half, in which both teams turned it over and the Jazz failed to get off a shot before the buzzer, Belinelli hurled one up from a 3-point line at his own end of the court — about a 65-footer.

Jazz: Missed their first 10 shots but bounced back to lead 20-19 by the end of the opening period. … Former Hawks star Joe Johnson had four points in 16 minutes. The 36-year-old Johnson played for the Hawks from 2005-12, making the All-Star game in six of seven seasons. Utah is the third team he’s played for since being traded by Atlanta. … Rudy Gobert had 10 rebounds.

Hawks: Coach Mike Budenholzer picked up a technical with 3:55 left in the game with his team up by 21 points. After the Jazz made the free throw, Budenholzer yelled at official Courtney Kirkland, “The game’s not over.” … Eight players hit 3-pointers. … Ersan Ilyasova was held to five points but grabbed a game-high 11 rebounds.

A THREE … AND ONE MORE

Just before the midway point of the first quarter, Joe Ingles hit a trey — Utah’s first points of the game — and tacked on a free throw after being fouled by Prince.

Then, late in the third quarter, Delaney swished a 3 from the corner. He was fouled by Royce O’Neale and made the free throw, giving Atlanta a 72-63 lead.

Jazz: Travel to Detroit on Wednesday to face the Pistons.

Hawks: Wrap up a six-game homestand, their longest of the season, by hosting the Toronto Raptors on Wednesday. 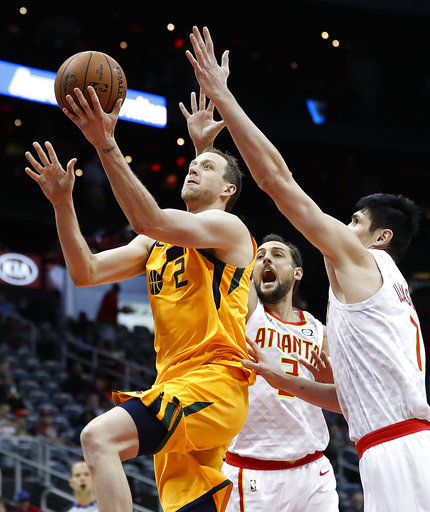 Utah Jazz's Joe Ingles, left, of Australia, shoots past the defense of Atlanta Hawks' Marco Belinelli, center, of Italy, and Ersan Ilyasova, of Turkey, in the second quarter of an NBA basketball game in Atlanta, Monday, Jan. 22, 2018. (AP Photo/David Goldman) 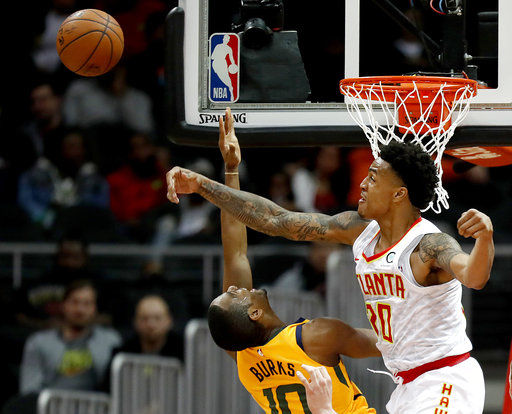 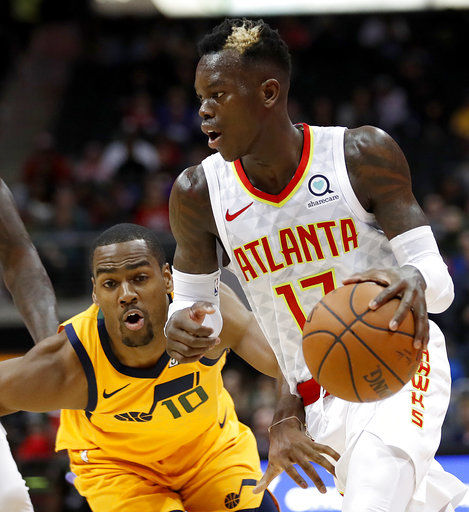 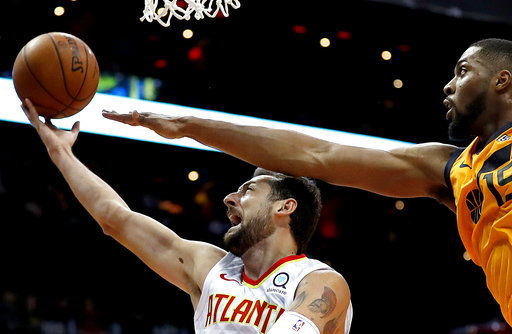